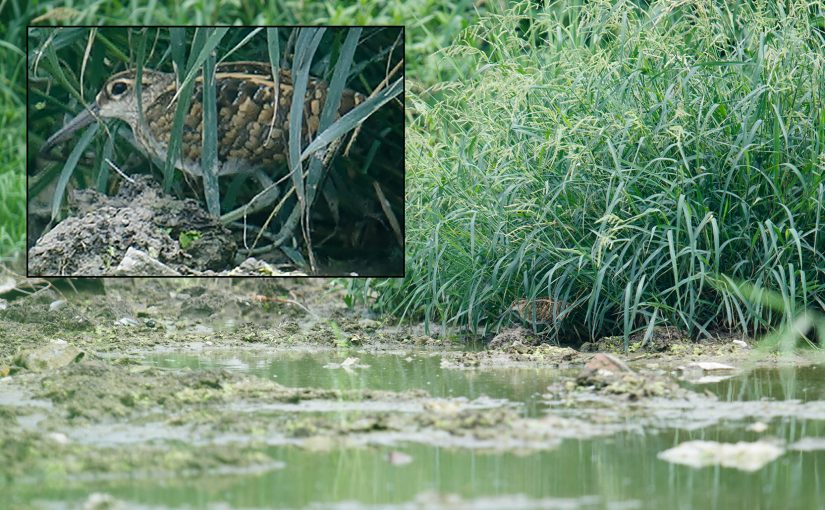 I birded 10-14 Aug. with visiting U.S. birder Bob Orenstein. We noted 107 species at coastal sites in Shanghai and southeast Jiangsu. At Pudong’s Cape Nanhui on 13 Aug., Bob and I had a rare Shanghai record of Greater Painted-snipe (above) and an early record of Mandarin Duck. On 12 Aug. at Dongling (32.224520, 121.534355), an impressive site that I had never birded, we had critically endangered Spoon-billed Sandpiper and 2605 endangered Great Knot. We saw 4 Nordmann’s Greenshank at Dongling and had 30 members of that endangered species 11 Aug. at the coastal birding area (32.757056, 120.952294) at Dongtai. We noted Himalayan Swiftlet at Dongling as well as on 10 Aug. at Cape Nanhui, where we also had Amur Paradise Flycatcher.

Dongling is only 185 km (115 mi.) north of People’s Square in Shanghai, closer than the declining old hot spot of Yangkou (“Rudong”) and the Dongtai coastal areas. Through a steady rain 12 Aug., Bob and I found high-tide roosts containing seas of Great Knot plus a single lonely Spoon-billed Sandpiper in complete winter plumage.

Seeing so many Great Knot was extremely heartening. In stark contrast, however, was endangered Far Eastern Curlew, of which only 5 were noted. Unlike near-threatened Eurasian Curlew (130), which though not abundant at Dongling numbered in the thousands at coastal Dongtai, Far Eastern Curlew were abundant nowhere.

On 11 Aug. Bob and I birded the reclaimed area of eastern Hengsha Island. The place was a bustle of activity, even at 5:15 in the morning, with 18-wheelers and dump trucks rumbling by. Security was tight. Guards were stationed at every intersection and in roving vans, one of which stopped us. We told them our purpose was birding; they told us to leave.

Before getting kicked out, Bob and I enjoyed one of my best moments ever with near-threatened Reed Parrotbill. A mega-flock of about 50 birds, much larger than the flocks one sees in the smaller, and ever-shrinking, reedy areas at Cape Nanhui, was making a loud noise during a morning feed. The flock contained juveniles and adults and proved that, provided it has habitat in which to flourish, Reed Parrotbill is a common, even dominant, reed-bed specialist.

I sound-recorded the raucous parrotbills:

Let’s look more closely at some of our birds.

​With the help of local Chinese birders, Bob and I found a pair of Greater Painted-snipe in a thickly vegetated, trash-strewn canal. The shy birds were aware of our presence and nervous, but they held their ground. That behavior, in combination with a photo another Chinese birder took suggesting that the male is brooding, persuaded us that the pair has a nest. We moved quickly away and did not return.

Footage I got 11 Aug. at Dongtai figures prominently in this video I made comparing Nordmann’s Greenshank to Common Greenshank.

Great Knot Calidris tenuirostris was the star of this four-wader movie I made at Dongling.

The video shows some of the characters distinguishing this species pair from Common Snipe. (The two species themselves are, except in extraordinary circumstances, indistinguishable from one another.)

As the autumn migration season progresses, the sod farm bears checking; in September at the farm, my partners and I had a rare Shanghai record of Common Ringed Plover.

​The video of the snipe as well as the other two videos embedded into this post were made with my combination of iPhone 6 plus PhoneSkope adapter plus Swarovski ATX-95. This powerful combination allows the videographer to shoot usable video from a great distance, allowing even a shy snipe to act naturally. (I never got closer than 40 m to the snipe.)

It was an exciting moment 10 Aug. when Amur Paradise Flycatcher appeared in Microforest 1 (30.923889, 121.971635). In the photo above, note the indistinct border between the bluish hood and white belly and the two-tone coloration of the hood—darker blue head, lighter blue breast. In Japanese Paradise Flycatcher, the hood tends to be uniformly colored and the border between the hood and white breast more distinct.

Adults and some juveniles are now moving through Shanghai. In a few weeks, nearly all adult Cuculus cuckoos will be gone, and we will be left with the juveniles. Cuckoos do not sing in autumn, and song of course is by far the best way of distinguishing among the Cuculus cuckoos of our region. I therefore almost invariably mark these silent birds “Cuculus sp.”

Even if my cuckoos passed these tests, unless they were singing the classic song (virtually unheard this time of year), how could I justify ID-ing them as Common? It is, of course, likely that some of them are Common, but how can one be sure that any given silent Cuculus cuckoo one is seeing is Common?

I refrain from making speculative species assignments. I refrain because we still do not know enough about the migration patterns in Shanghai of Oriental Cuckoo C. optatus and Himalayan Cuckoo C. saturatus.

Like so many of the woodland passerines that pass through Shanghai on migration, Oriental Cuckoo breeds in northeast China. Like those woodland passerines, Oriental Cuckoo also may pass through Shanghai on migration. Oriental, of course, is very similar to Common, the two species having so many overlapping characters that a firm ID of non-photographed, non-singing birds is all but impossible; and Himalayan, which theoretically may be present in or near our region, is even more similar to Oriental (“virtually identical”—Mark Brazil, Birds of East Asia, p. 256).

In Shanghai it may be tempting to assign silent Cuculus cuckoos, particularly yellow-eyed adults, to Common Cuckoo. Before I ever started doing that, though, I would want to know more about Oriental Cuckoo and Himalayan Cuckoo in Shanghai. Maybe future studies, using captured cuckoos whose DNA has been analyzed, will reveal a surprising pattern of Cuculus migration in Shanghai. Maybe those studies will show that considerable numbers of Cuculus passage migrants are Oriental Cuckoo.

Until that day comes, I usually hold back from ID-ing non-singing Cuculus cuckoos.

For more information on Shanghai-area cuckoos, see my post, “The Cuckoos of Shanghai.”

​After being nearly unheard of in Shanghai as recently as a few years ago, Himalayan Swiftlet is now more and more regularly recorded in Shanghai in both spring and autumn.

That communication methods are improving is indisputable. One of the main causes of the improved communication is the WeChat group I founded, Shanghai Birding. The members of that group, who range from the newest of newbies to some of the most expert birders in China, regularly exchange sightings in real-time.

Here is the complete list of the birds noted by Bob Orenstein and me 10-14 Aug.: