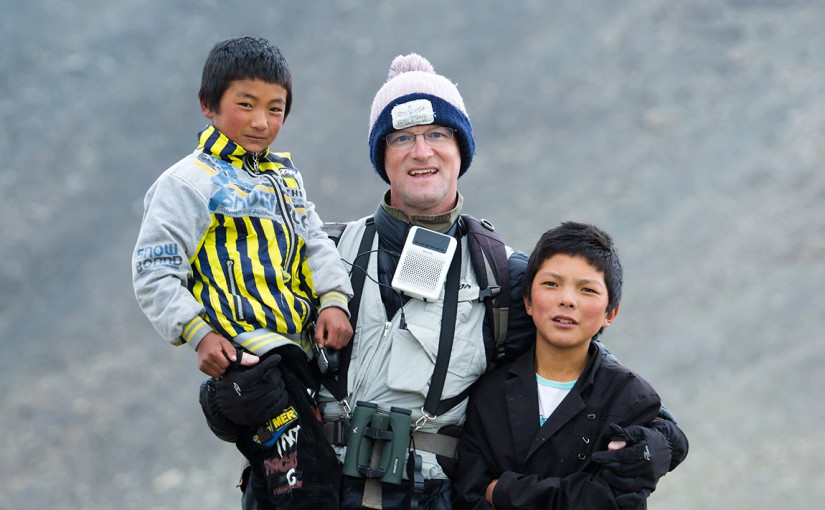 I have two goals in China: to study the birds of Shanghai and to discover birding locations elsewhere in this vast country. A selection of my best birding expeditions is below. Read them, enjoy them, plan your own trip, and reach me with questions at info@shanghaibirding.com. — Craig Brelsford

• Hainan Peacock-Pheasant & Other Endemics on Hainan Island: I spent most of my 28 days at Jianfengling on the southern part of Hainan. I noted 26 endemic species or subspecies, among them Hainan Silver Pheasant, Hainan Peacock-Pheasant, Hainan Partridge, and Hainan Leaf Warbler. I found Ratchet-tailed Treepie and Yellow-billed Nuthatch, species in China found only on Hainan.

• Indian Blue Robin & Sichuan Thrush at Wuyipeng and Wolong-Balangshan, Sichuan: ​​We covered the 79-km (49-mi.) stretch of mountain highway between Wolong and Rilong. Visiting at the height of breeding season, we noted 113 bird species in just four days. Our list reflected the rich diversity of the region, with eight species of gamebird, eight species of tit, nine species of leaf warbler, and sought-after species such as Sichuan Thrush, Indian Blue Robin, and Firethroat.

• Eastern Himalayan Birds in the Majestic Dulong Gorge, Yunnan: Our team birded the remote valley from end to end and noted 170 species. Among our many spectacular finds were flocks of up to 300 Grandala, Ibisbill in the thundering Dulong River, and one of the world’s least-known deer, the mysterious Gongshan Muntjac. We noted western Yunnan specialties Rufous-bellied Bush Robin and Golden-naped Finch.

• Himalayan Thrush in Dulong Gorge, Yunnan; Firethroat in Sichuan: I became one of the first birders to visit Dulong Gorge in northwestern Yunnan. In collaboration with Per Alström, I photographed and sound-recorded Himalayan Thrush. My team found the exquisite Fire-tailed Myzornis as well as other species with limited ranges in China, among them Scaly Laughingthrush and Scarlet Finch. In Sichuan I achieved the best photographs ever taken in the wild of female Firethroat.

• Himalayan Specialties in the Gaoligong Mountains, Yunnan: This 47-day expedition included visits to Tengchong and Nabang and 25 nights at Baihualing in the Gaoligong Mountains. At Baihualing we visited the bird-photography blinds, finding there Slender-billed Scimitar Babbler, Grey-sided Laughingthrush, and Red-tailed Laughingthrush. In Nabang on the border with Burma, we found several species whose ranges just touch China, among them Wreathed Hornbill and Black-backed Forktail.

• Mammals and Birds of the Tibetan Plateau in Qinghai: Our team drove 3977 km (2,471 mi.) in 15 days, starting and ending in Golmud, Qinghai. In mountains as high as 5100 m (16,730 ft.), we found 98 species of bird. Mammals were the big stars. I watched a Tibetan Fox catch and devour a vole, we found 46 Tibetan Antelope and a Tibetan Wolf in Antelope Valley, and we saw dozens of Tibetan Wild Ass.

• Tibetan Bunting Leads Parade of Tibetan Plateau Endemics in Qinghai: I led a three-person team on a 23-day trip to Qinghai. We covered most of the Tibetans (Tibetan Snowcock, Tibetan Partridge, Tibetan Babax, Tibetan Rosefinch, and Tibetan Bunting) and we found Przevalski’s Finch near Qinghai Lake.

• Birds of the Remnant Manchurian Forest of Heilongjiang, Plus Remote Northern Inner Mongolia: Elaine Du and I became the first birders to survey Xidaquan, a vast forest reserve in Elaine’s home county of Boli in southeastern Heilongjiang. We noted 91 species around Xidaquan, among them Ural Owl and local breeders Eastern Crowned Warbler, Radde’s Warbler, and White-throated Rock Thrush. We also explored Hulunbeier, the remote U.K.-sized jurisdiction in Inner Mongolia. There we found breeding Scaly-sided Merganser and Arctic Warbler as well as Black Grouse, Great Grey Owl, and Baikal Bush Warbler.

• Jankowski’s Bunting and Other Northeast China Species: We found Jankowski’s Bunting in Inner Mongolia and counts of up to 600 Siberian Crane in Jilin. Tumuji wetland yielded Red-crowned Crane and Oriental Stork as well as flocks of hundreds of geese, and at Zhalong Nature Reserve in Heilongjiang we found Swan Goose and White-naped Crane.

• Central Asian Endemics in Wild Northern Xinjiang: Jan-Erik Nilsén and I covered the area from the Tianshan Mountains in the south to the Altai Mountains in the north. We noted 160 species of bird, among them China rarities Siberian Chiffchaff and Sedge Warbler. We scoped Himalayan Snowcock in the Tianshan, ticked White-headed Duck at a bird-rich reservoir in Urumqi, and at beautiful Hongyanglin oasis found Central Asian specialties White-winged Woodpecker, Turkestan Tit, and Sykes’s Warbler. We had Red-fronted Serin and Eversmann’s Redstart in the Tianshan and Sulphur-bellied Warbler in the Altai.

• Astounding Eastern Record of “Gansu” Bluetail in Hebei: On this mountain near Beijing, my partners and I achieved the easternmost record in history of “Gansu” Bluetail. We also had sought-after regional breeders such as Grey-sided Thrush and Green-backed Flycatcher, and we just missed Zappey’s Flycatcher, which also breeds on the mountain.

• Ticking Endemics in Taiwan: Partnering with Taiwanese bird guide Wú Chóng Hàn, I noted 19 of the endemic bird species of Taiwan. Among the endemics were the majestic Mikado Pheasant as well as Swinhoe’s Pheasant, Taiwan Partridge, Steere’s Liocichla, and White-eared Sibia. A trip to Orchid Island netted us Lanyu Scops Owl and Philippine Cuckoo-Dove. We covered Taiwan from north to south, driving 3800 km (2,360 mi.) in 19 days and finding more than a quarter of the bird species recorded on the island.