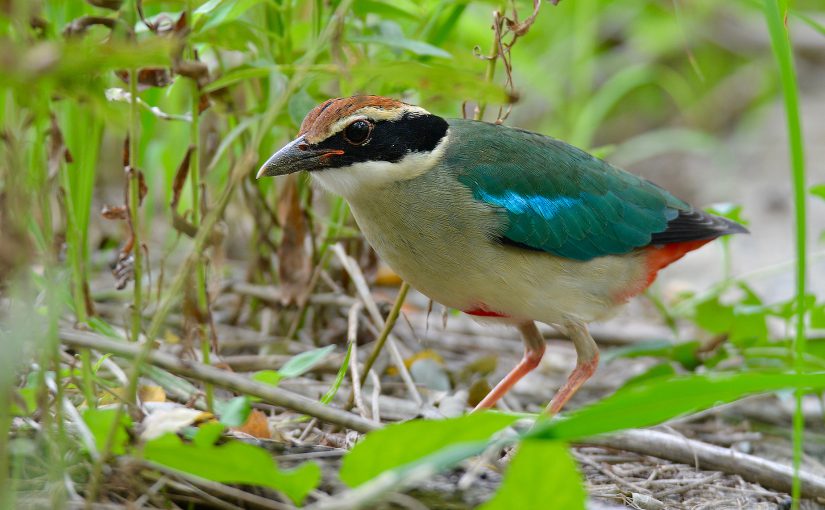 The autumn migration season in Shanghai has kicked off in style. Leading the parade of migrants is Fairy Pitta, seen in Microforest 2 at Cape Nanhui on Sat. 3 Sept. 2016. Another notable sighting on Saturday was Common Ringed Plover at the sod farm south of Pudong International Airport.

Partnering yet again with Shanghai-based British birder Michael Grunwell, Elaine Du and I were out Sat. 27 Aug. and again the following Saturday, 3 Sept. On both days we found Asian Dowitcher and endangered Great Knot. On 3 Sept. a group of 135 Great Knot and 3 Asian Dowitcher were part of a wader roost of ca. 400 individuals in the canal between microforests 1 and 2. The roost also contained a single endangered Nordmann’s Greenshank, 30 Red Knot, and 3 Curlew Sandpiper. On the mudflats nearby, we had a flyby of 3 endangered Far Eastern Curlew. On 27 Aug. a smaller roost at the same location had some of the species noted above as well as Grey-tailed Tattler. 27 Aug. also yielded a single Red-necked Phalarope.

Other highlights from 3 Sept.:

ca. 200 near-threatened Black-tailed Godwit in that wader roost at Nanhui

— On Sat. 27 Aug. we added to our trio special guest Mikkel Thorup, a mathematician from Denmark. This was not Mikkel’s first birding trip in China, but he is still fresh enough that he was picking off lifers left and right. Later, we were joined by the international high-school birding team of Komatsu Yasuhiko (Japan), Larry Chen (Canada), and Chi Shu (Shanghai).

— The decline of Lesser Yangshan as a birding spot is accelerating. Garbage Dump Coastal Plain is no longer a birding site. Where birders once ranged, earth-moving machines now sit, and new buildings going up. Garbage Dump Gully is intact, but the increased activity on the coastal plain means that security, already tight now, may be even tighter in the future, and it may soon prove impossible to reach the gully. A migrant trap par excellence, Garbage Dump Gully is crucial to Shanghai birders. Over the years the gully has given birders Japanese Robin, Verditer Flycatcher, Varied Tit, White-bellied Green Pigeon, and scores of other good records. Garbage Dump Gully must be preserved; access to it must be sustained.

— On 27 Aug. we found a banded Black-tailed Godwit. As is my habit, I filled out and submitted the Leg Flag Report Form on the Web site of the Australasian Wader Studies Group. Our godwit, it turns out, received its bands on 19 June 2016 on the Kamchatka Peninsula in Russia (at 57.08, 156.64), 4000 km from Shanghai. UPDATE: On 9 Sept. 2016 a godwit with the E7 band was found by Chinese photographer kaca at virtually the same location as the 27 Aug. sighting.

— The task of ID-ing the Nordmann’s was clear-cut. A Common Greenshank that appeared next to the Nordmann’s was helpful. The head of the Nordmann’s was proportionally larger than that of the Common, and it had a higher knee with shorter legs—an obviously stockier bird, a rugby player compared to a ballerina. The Nordmann’s stretched out its wing, revealing clean white plumage underneath. Common has a greyer underwing.