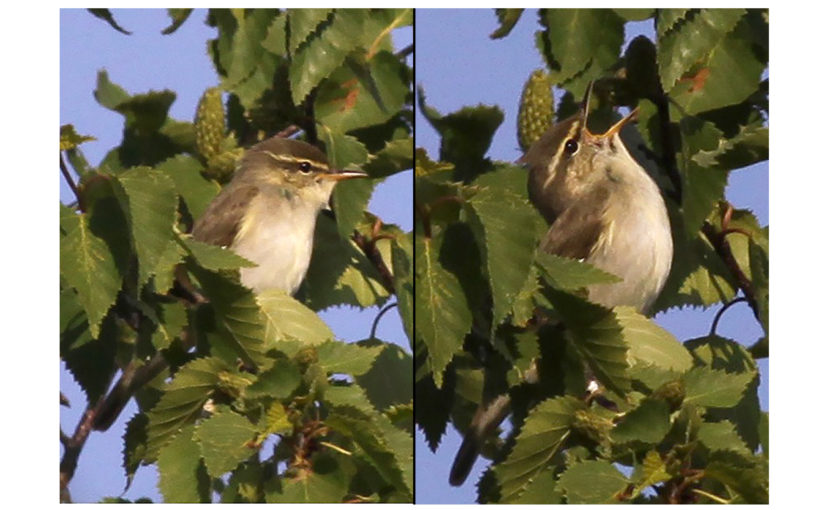 by Christoph Zöckler
for shanghaibirding.com

The first time I heard the song of Kamchatka Leaf Warbler Phylloscopus examinandus, I knew it was a different bird, one I had never heard before. Little did I know its true identity. Our Russian friend just labeled it Arctic Warbler P. borealis, but I was not sure. Today we know that Kamchatka Leaf Warbler is distinct from Arctic Warbler. During my six visits to the Kamchatka Peninsula, I have been lucky to see and hear both species.

In the summer of 2008 I visited Kamchatka for the first time. It was the fulfillment of a dream. Having traveled all over the Russian Arctic almost each summer for the previous 12 years, I was very happy when my friend Evgeny Syroechkovskiy invited me to join his expedition to Kamchatka in search of the southernmost nesting site of Spoon-billed Sandpiper.

We were hosted and guided by local birder Yuri Gerasimov. His father, Nicolai Gerasimov, is one of the most prominent ornithologists in Kamchatka. He has been working on the peninsula most of his life and has published several books on the birds of the peninsula and adjacent islands. We were invited to stay at his little zoo in Yelizovo (53.188752, 158.382199), just outside the regional capital, Petropavlovsk-Kamchatsky.

His main attraction and pride was the little colony of Aleutian Cackling Goose that he was breeding there in collaboration with Japanese waterfowl experts. The zoo was not very big and was arranged nicely with small ponds and paths. A slightly elevated sitting area surrounded by small bushes was in the center overlooking most of the area. A round wooden table in the middle was soon filled with all sorts of goodies—zakuska, as the Russians call the snacks that go with the drinks. Of course we had to have a little welcome reception and celebration, constantly surrounded by the cackling calls of the geese. Amid the cacophony I heard another sound, strange and unfamiliar. I slipped away and followed it.

The only bird I could find in the trees was an Arctic-type warbler. As we now know, it was a Kamchatka Leaf Warbler. A rosefinch was also calling very loudly and Rustic Bunting seemed to be very common, but the odd song clearly had be coming from the shy leaf warbler. I had heard Arctic Warbler sing at various places in Siberia, but this song sounded not quite right. It sounded like an Arctic Warbler played at only a quarter of the speed, slightly slurred. On my return to the table, I asked Yuri about it. He said the bird was Arctic Warbler and that Arctic sings differently here in Kamchatka. At the time, neither of us knew that only a few years later, the species would be split as a result of the work of Per Alström and colleagues. I was keen to get a decent recording in the coming days, but things (including the weather) took a slightly different turn, and we departed earlier than planned. The only recording I got was unsatisfactory.

In 2009 we returned to Kamchatka, this time to search for Spoon-billed Sandpiper a bit further north. Again we assembled at Nicolai’s little zoo and were well-treated with all sorts of good food and drink. Probably because Evgeny told Nicolai how many times I have been to Russia and how well-trained I am, I was offered sto gram, which roughly translated means a glass of pure alcohol, and which drunk together with lots of pickled food and compot, a kind of fruit juice, is just about bearable and quite pleasant to start off, but dangerous. After a while I was clearly hampered in my ability to pay attention to the Arctic Warbler Complex. For Nicolai, Arctic-types are a common spring arrival, often coming very late, in mid-June, and singing everywhere. He was keener to show me Grey Bunting and dragged me outside his zoo, where on the wires just in front of me a nice male was singing. The southern tip of Kamchatka is the only place in Russia to encounter this more southerly bunting. Had I brought my recording kit? No, but there is always another time.

In the days that followed I did have a chance to look for the mystery leaf warbler, and the recording I got was a little better.

Well, my friends who were with me said it just might be a new species: Kamchatka Leaf Warbler!

I am often skeptical about all these splits, but on this occasion I became interested. Clearly the call and song are so different, but watching this little warbler, one can hardly see any difference. Maybe the eye-stripe is a bit more yellowish.

There never seems to be enough time, and we were drawn further north to search for Spoon-billed Sandpiper in the Ossora Region (59.233068, 163.067593). It is very difficult to access this part of the world, and we were lucky to get permission and a reasonable plane fare to Ossora. It was here, not far south of this little town, that we encountered Arctic Warbler. I did not take much notice because it is such a normal background sound in almost every region of the Russian Arctic, but my partner, Alex, suddenly got really excited and shouted, “This is an Arctic Warbler!” And indeed, its song was much more like the Arctic Warbler we knew and no longer like Kamchatka Leaf Warbler.

I was very lucky to come back to Kamchatka in 2011 when we started our partnership with Heritage Expeditions (heritage-expeditions.com). Again I was invited to stay at Nicolai’s zoo. The recording I acquired is a mix of a Kamchatka Leaf Warbler and a very noisy Common Rosefinch and a more distant Middendorf’s Grasshopper Warbler as well as the cackling Aleutian Canada Geese from Nicolai’s zoo:

Our partnership with Heritage Expeditions was a complete success, and we have continued our collaboration every year since. In 2017, 2018 and 2019, I was able to return to Kamchatka with Heritage, and it is itself a great story to experience the Peninsula by the exclusive access of the small cruise ship Prof. Khromov. That story will need to be told another time.

Regarding my final recording for this post, it may seem odd to hear Kamchatka Leaf Warbler amid a frog concert, but this is possible in Kamchatka, where introduced frogs have survived for decades in lakes, even through the harsh winter, through thermal hot water support!

This recording shows nicely the rich variety of strophes displayed in the song. It also contains the clicking calls that you can hear on migration.

I have been blessed with six visits to the amazing Kamchatka Peninsula. I have had fantastic experiences in this magical place over the years, and I hope to come back sometime soon to immerse myself once again in this vast wilderness.

Kamchatka Leaf Warbler is an uncommon and overlooked passage migrant in Shanghai. This website is a clearinghouse of information on that species and the entire Arctic Warbler Complex. Use these resources:

This post is part of a series on Shanghai birds in eastern Russia and Alaska.

• Birds of the Yamal Peninsula in Northwest Siberia