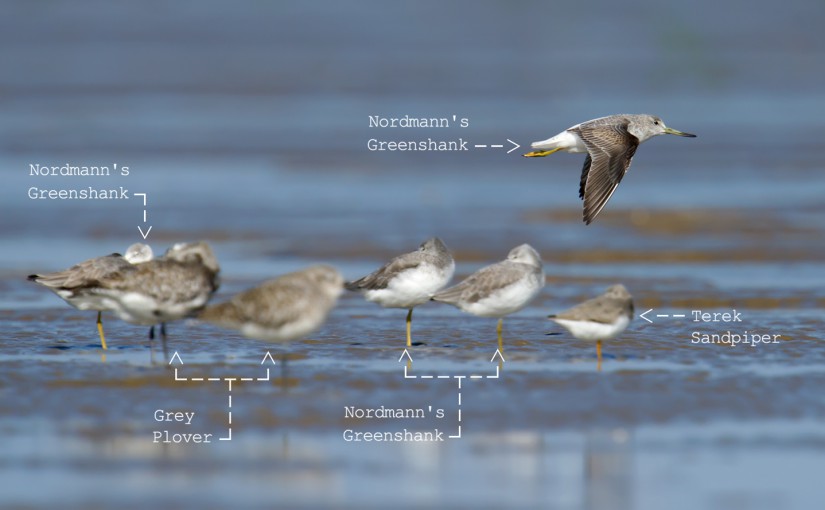 A major point on the East Asian-Australasian Flyway, Dongtai offers world-class birding 12 months of the year. No visit to Dongtai goes unrewarded; every visit holds a surprise. I have seen Black-faced Spoonbill, Nordmann’s Greenshank, Spoon-billed Sandpiper, Chinese Egret, and flocks of 500+ Bar-tailed Godwit, 300+ Eurasian Curlew, 200+ Great Knot, and 150+ Terek Sandpiper—in June! I have found shorebirds banded thousands of miles away, and we have found nests of Kentish Plover a hair’s breadth from the tire ruts atop the sea-wall road.

Birders who have traveled half the world see the mudflats at Dongtai and say they have never experienced anything like them. Where else on Earth can one view more than 700 Nordmann’s Greenshank in a single eyeful? The mudflats are much relied on by Spoon-billed Sandpiper, and locally common Saunders’s Gull mass there in their hundreds. The best place to view Spoon-billed Sandpiper and Nordmann’s Greenshank is the sea wall at 32.756637, 120.952256.

In a single visit during migration season, it is possible to see those species plus Grey-tailed Tattler, Red Knot, and Far Eastern Curlew, and ultra-rarities such as Dalmatian Pelican and Greater Flamingo. Migrating Eurasian Woodcock can sometimes be seen resting on the mud.

In spring and autumn, a drive along the sea wall will reveal dozens of Terek Sandpiper, hundreds of Eurasian Oystercatcher, and thousands of Grey Plover, Eurasian Curlew, Dunlin, and Red-necked Stint. Take your spotting scope!

Unlike the mudflats 40 km south at Yangkou, those at Dongtai are free from the baleful effect of Smooth Cordgrass Spartina alterniflora. For the most part, a look out from the Dongtai sea wall reveals mile after mile of monotonous, brown mud—a beautiful sight indeed.

The lack of Smooth Cordgrass may be a good thing, but the lack of a stand of trees right on the coast (as at Yangkou) is one of the few weaknesses of Dongtai. Scrub, however, is abundant.

On the steep inner slope of sea wall, look in the thick vegetation for scarce woodland migrants such as Rufous Hawk-Cuckoo, Chinese Thrush, and Green-backed Flycatcher. Black-winged Kite and Black Kite pass overhead, and there are common migrants such as Brown Shrike, Stejneger’s Stonechat, and Daurian Redstart.

When the tide floods to the sea wall, waders find plenty of roosting areas on the shores of the many lagoons on the still-undeveloped reclaimed land. Little Grebe and Great Crested Grebe are abundant on the ponds, and if you look closely you may find Black-necked Grebe.

Inside the sea wall, higher areas of the reclaimed land are drier and grassy. Birders can view this large habitat from the sea wall looking west or from the edge of the forest looking east. Hen Harrier and Pied Harrier patrol these precincts, and Eurasian Hobby and Peregrine Falcon are commonly noted. Grey-headed Lapwing breed here, and you may find Lesser Coucal.

Many tall trees provide habitat for passage migrants such as White-throated Rock Thrush. Forest Wagtail and Red Turtle Dove breed in the forests here, and the calls of Lesser Cuckoo, Common Cuckoo, Indian Cuckoo, and Asian Koel ring out in spring. Look for Black-capped Kingfisher perching on trees above the canals. Drive slowly through the forest to avoid hitting the many Common Pheasant in the area and for the slight chance of spotting Masked Palm Civet Paguma larvata. Other mammals seen around here are Tolai Hare Lepus tolai, Chinese Hare Lepus sinensis, and Amur Hedgehog Erinaceus amurensis.

A SAD NOTE ABOUT THE POSSIBLE FUTURE OF DONGTAI

A birder’s experience at Dongtai illustrates the threats this great wetland faces. We had the pleasure of introducing Dongtai to veteran British birder Michael Grunwell. “This is clearly better than Yangkou,” Michael said. Michael’s and our enthusiasm was dampened by the billboards we found near the southeast corner of the Surf ’n’ Turf Trail. The big signs describe in detail the plan to destroy the mudflats with another sea wall several kilometers out. “Every square inch of mudflat that we’ve birded these past two days will be gone,” Michael sighed.