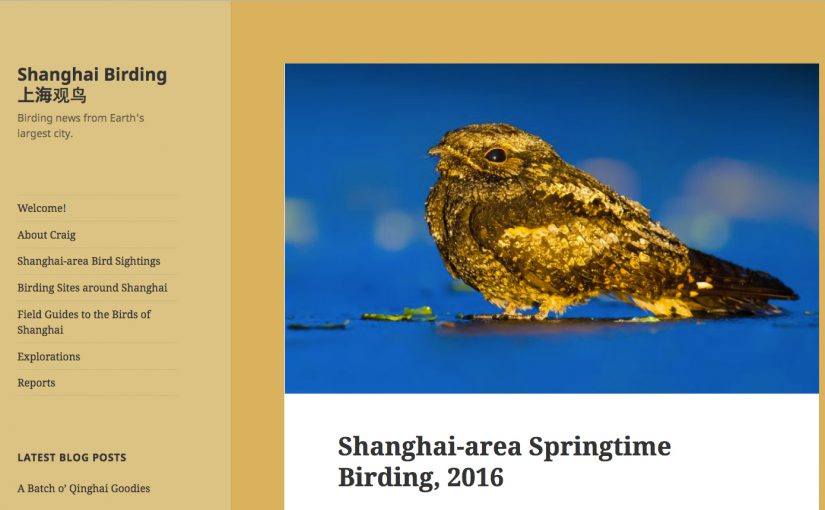 Finally, it is ready: Elaine’s and my report on the doings of this past spring in Shanghai. We’re calling it “Shanghai-area Springtime Birding, 2016.”

The report covers 7 March to 24 May 2016. Elaine and I birded 38 of those 79 days and noted 240 species. We partnered with members of our network of subscribers and contributors to shanghaibirding.com. Special thanks to Michael Grunwell and Jan-Erik Nilsén as well as to Xueping Popp, Stephan Popp, Kai Pflug, and Ian Davies.

Why should you read “Shanghai-area Springtime Birding, 2016”? Read it to plan your own explorations and to get an idea of what birds you can expect to see in this city in March, April, and May. You’ll find no more complete a report on that subject, anywhere.

“We deepened our knowledge of the birds of the East Asian–Australasian Flyway and increased our understanding of the pressures these birds face in the Shanghai region. One of the most densely populated areas in the world and an economic dynamo, the Shanghai tri-province area encompasses Shanghai, Jiangsu, and Zhejiang, is the size of the U.S. state of Kansas, and has a population of 160 million–half that of the United States.”

“ — We recorded the first Blue Whistling Thrush in Shanghai since 1987. Other interesting finds were Horned Grebe on Chongming, Oriental Plover on Hengsha Island, Ruddy Kingfisher at Yangkou, Red-throated Thrush at Century Park, singing Sakhalin Leaf Warbler at Zhongshan Park, Grey-crowned Warbler, Two-barred Warbler, Pechora Pipit, and Citrine Wagtail at Nanhui, White-shouldered Starling on Lesser Yangshan, Rufous-faced Warbler at Nanhui and on Lesser Yangshan, and Bluethroat at Nanhui and on Chongming.”