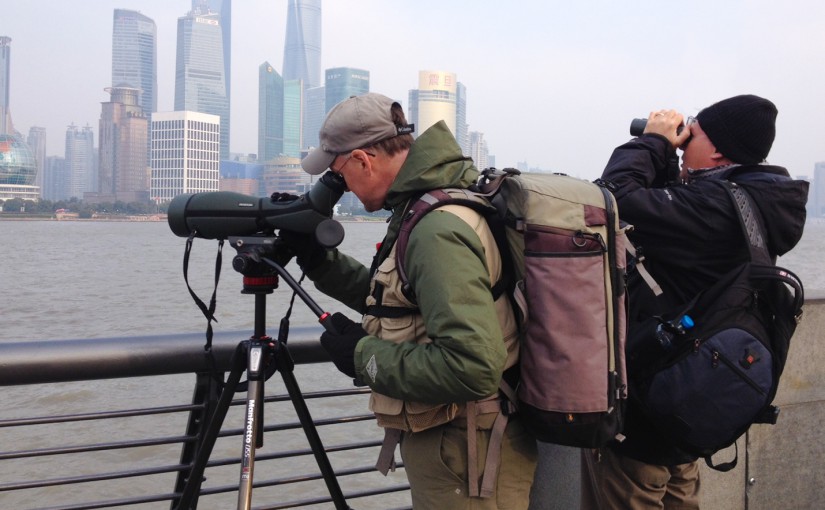 CAPE NANHUI: Even in decline, the coastal area 85 km (53 mi.) southeast of People’s Square remains the premier birding spot in Shanghai and one of the most famous birding sites in China. The microforests at Cape Nanhui are astonishingly effective migrant traps for woodland species such as Japanese Paradise Flycatcher and Siberian Blue Robin. The wetlands offer East Asian specialties Black-faced Spoonbill and Asian Dowitcher.

WESTERN SHANGHAI: Qingpu and Songjiang districts offer a birding experience highly different from that of coastal Shanghai. Here, in remnant wetlands and wooded areas, can be found species rarely seen on the coast, among them Brown-chested Jungle Flycatcher and Orange-bellied Leafbird.

LESSER YANGSHAN ISLAND: Part of Zhoushan Archipelago in the East China Sea. Lies 25 km (16 mi.) off Cape Nanhui and is linked to it by the Donghai Bridge. Migrating passerines are a major attraction. Meadow Bunting breeds on the island.

DONGTAI (Tiaozini): Coastal area in Jiangsu, 250 km (155 mi.) north of Shanghai. Flocks of more than 700 Nordmann’s Greenshank have been recorded there. Spoon-billed Sandpiper is a regular visitor.

YANGKOU (Rudong): The fishing town north of Shanghai has declined in the face of manic development. It formerly achieved fame for its mudflats, an important staging area for Spoon-billed Sandpiper.

Featured image: With the skyscrapers of Pudong as their backdrop, Craig Brelsford (L) and Michael Grunwell scan the Huangpu River for gulls. For more on birding the Huangpu River, see our page Urban Shanghai. (Elaine Du)