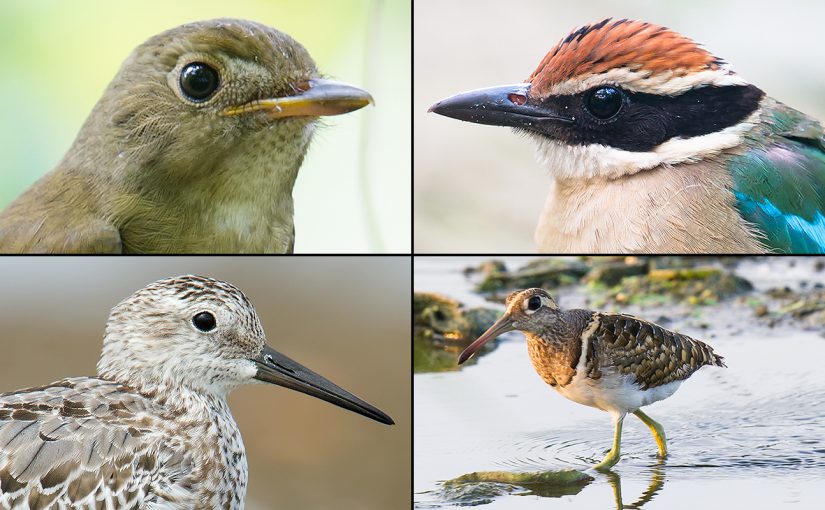 As summer melts into fall, Pudong’s Cape Nanhui continues to prove to be one of the best birding locations in China. In the period 26 Aug. to 8 Sept., I birded four days at the most southeasterly point of Shanghai, as well as at other key locations in Earth’s Greatest City. I noted 106 species.

Here are some of the best birds:

3 Amur found 27 Aug. at Binhai Forest Park, the heavily wooded green space near Cape Nanhui, 4.5 km inland from the East China Sea. A stunning white-morph male and rufous-morph were continuously together, and we found a single rufous-morph in another part of the park. The white-morph as well as the rufous-morph accompanying it were calling. I have seen dozens of paradise flycatchers in Shanghai over the years and heard only one call (a Japanese for 1 or 2 seconds). Why were the Amur at Binhai Forest Park calling?

Binhai Forest Park is visited little and birded even less; could this quiet, thickly wooded park hold breeding Amur Paradise Flycatcher? As the white-morph male looks like something out of a fairy tale and is a bird even a non-birder would recognize, I asked park employees whether they had seen it. All said no.

The white-morph Amur that U.S. birder Tom Hurley and I saw was only the second I had ever beheld and a first for me in Shanghai. At Dongzhai National Nature Reserve, Henan, on 5 June 2010, I photographed the white-morph shown right. The Binhai white-morph lacked the long tail feathers of the bird I saw at Dongzhai but was still an unforgettable sight.

On 4 Sept. at Nanhui, my wife, Elaine Du, and I sneaked away from the action in Nanhui’s Microforest 1, where the photographers were set up. Microforest 4 was devoid of humans and peaceful. I tiptoed in. I scanned the undergrowth before me and, to my surprise, found a Fairy Pitta.

The pitta was standing on the ground, almost completely blanketed by a tangle of leaves, branches, and vines. Its big black eye was fixed on me. It didn’t move. I looked at the pitta, the pitta at me.

We stared at each other for 10 minutes.

Thus roosts the pitta during migration. It parks itself in thickets and waits. It bides its time, conserves its energy. Somewhere south of Shanghai, it will veer off the coast and fly non-stop across the South China Sea to Borneo, where it will spend the winter.

The pittas are mainly tropical species. Most are short-distance migrants. Not Fairy Pitta. No pitta invades the temperate world as deeply as Fairy Pitta; none makes so audacious an incursion into the north. None makes so long and daring a migration across hundreds of miles of sea.

My pitta was saving up its energy for its life-or-death run across the sea. Good luck, you explorer, you risk-taker! Good luck, Fairy Pitta.

Viewed with Elaine at dusk 3 Sept. then viewed again the next morning at dawn. For weeks, the painted-snipes have been found at a single spot (30.939534, 121.955370) in a trash-strewn canal. Earlier, when news of the painted-snipe at Cape Nanhui first broke, I wrote a post in which I regretted sharing the location where were found the painted-snipes, a rare species in Shanghai. As things stand now, I can breathe easier; the many photographers who have visited the location have had no ill effect. The birds I found 4 Sept. were aware of me but behaved normally. They fed, drank, and preened. I used my car as a blind and never got out. The painted-snipes at Nanhui tolerate photographers confined to their cars.

27 Aug., South Pond. Juvenile. Videoed by me using my iPhone 6, adapter by the U.S. company PhoneSkope, and my Swarovski ATX-95 spotting scope:

Photographed by me in gorgeous morning light 4 Sept. at Cape Nanhui.

Adult plus another goshawk calling unseen at inner-city Zhongshan Park on 8 Sept.

I videoed the goshawks:

Party of 3 on 26 Aug. at Cape Nanhui. When flushed, made loud, raspy, memorable call. I quickly compared the call I had just heard to calls of Pin-tailed Snipe downloaded from xeno-canto.org to my iPhone. The match was perfect. Lookalike Swinhoe’s Snipe rarely calls when flushed. Dark underwing clear in my many photographs of the trio. Flew high when flushed, then returned to land at point only 50 m from where originally flushed.

The canals on the inland side of the sea wall were resounding with the characteristic yaps of this passage migrant. A clear photo is especially useful for discerning the thick bill.

In the wake of my post of 31 Aug. 2017 about distinguishing Pale-legged from Sakhalin Leaf Warbler by call, I was hoping to find more members of this species pair. On 4 Sept. 2017 at Pudong’s Cape Nanhui, I was richly rewarded. For more, see my 10 Sept. 2017 post, “Pale-Sak Calls: An Addendum.”

It’s worth stressing how good is our opportunity here in Shanghai to view Siberian Blue Robin for a few short weeks each spring and fall. On the breeding grounds up in northern China, the males sing loudly and beautifully but are very hard to see; no Siberian Blue Robin I experienced on the breeding grounds ever sang from anything like an exposed perch. The few I was able to see in Elaine’s hometown of Boli, Heilongjiang sang on or near the ground. Females are almost impossible to see; in fact, I saw not one in Heilongjiang in May-June 2016. Siberian Blue Robin are also apparently hard to see on their wintering grounds in south China and Southeast Asia. Places such as Cape Nanhui are probably among the best places in the world to view this common but shy species. We Shanghai birders have yet another reason to count ourselves lucky.