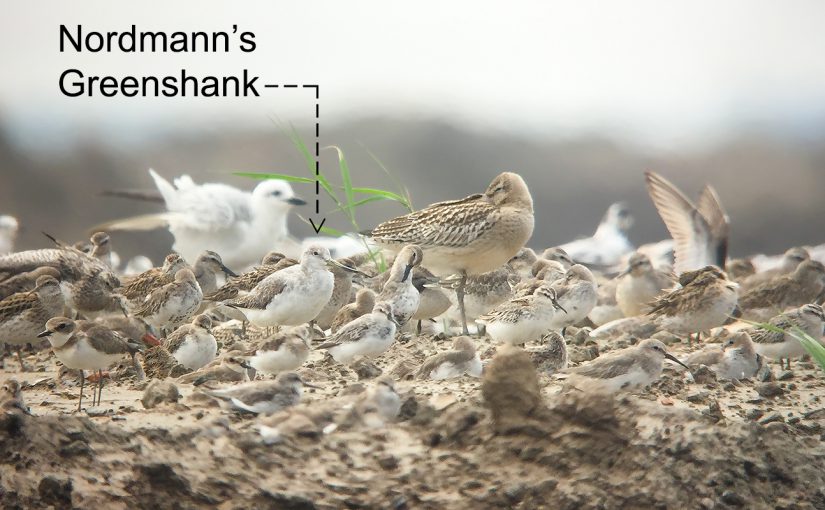 Distinguishing non-breeding Nordmann’s Greenshank from Common Greenshank is a tricky task, but one that reaps rewards. With practice you too can feel the rush that comes when you realize that the greenshank you are viewing is not one of the most common shorebirds in Eurasia, but one of the rarest. At Cape Nanhui in Pudong, our team experienced that thrill, picking out a Nordmann’s in a roost holding a few hundred shorebirds.

We noted the following:

— Tibiae of Nordmann’s Greenshank are noticeably shorter than those of Common Greenshank.

The picture above makes it clear. The biggest reason Nordmann’s is known as the stockier bird, the rugby player compared to the ballerina that is Common Greenshank, is tibia and leg length.

— Nordmann’s has a thicker neck that it often holds closer to its body and has a pronounced ventral angle (protruding belly), giving Nordmann’s a more hunched appearance than Common.

As with many of the characters of these species, the hunched stance of Nordmann’s is not always obvious, especially when the bird is active. Likewise, even a Common sometimes can appear stout. But as one’s observation time grows, the classic features of both species will emerge.

— Nordmann’s has a thicker, more obviously bi-colored bill than Common.

Because the Nordmann’s at our Nanhui roost did not fly, we missed the following key characteristics:

— The toes of Nordmann’s project just beyond the tail-tip; the toes of Common project farther.

This difference can be subtle, and a good camera is sometimes needed to appreciate it. But it is consistent.

— Nordmann’s has a cleaner tail and underwing than Common.

Even if your Nordmann’s is roosting, you can sometimes note the white underwing. Wait for the bird to stretch out its wing.

— The calls of Nordmann’s Greenshank and Common Greenshank are markedly different. The well-known chew-chew-chew call of Common is never made by Nordmann’s.

Nordmann’s Greenshank Tringa guttifer is an endangered species. Only 500 to 1,000 of these birds are thought to remain. Development along the East Asian coast is the main reason for its decline. Nordmann’s breeds in Russia, passes through China, and winters in Southeast Asia. It is present in the Shanghai area for several months each year.

Featured image: Nordmann’s Greenshank stands among wader roost at Cape Nanhui, Shanghai. Using the principles described in this post, our team was able to ID this Nordmann’s. (Komatsu Yasuhiko/Craig Brelsford)