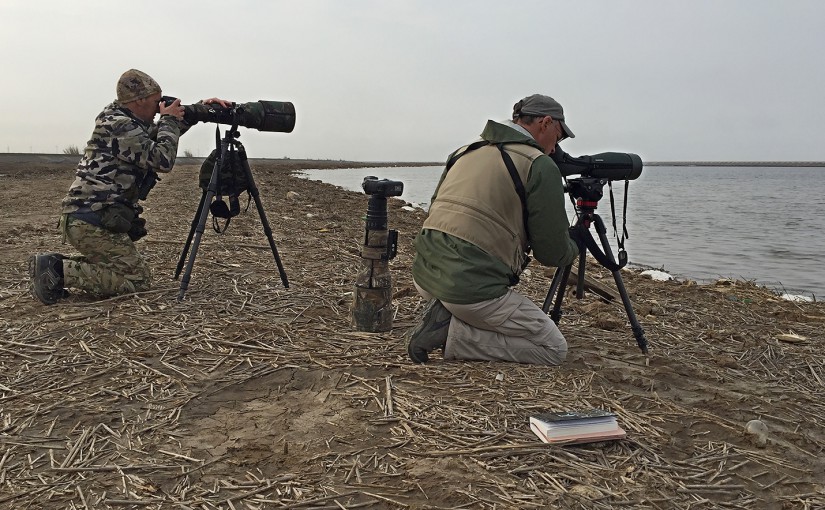 On 18-20 March, Elaine Du, Kai Pflug, and I noted 89 species at Chongming, Dongtai, and Yangkou. We found a dowitcher at Dongtai, and at Chongming we had 90 cranes so far away and in such thick fog that we were unable to determine how many were the expected Hooded Crane. The canal at the base of the northeast Chongming sea wall gave us Common Goldeneye, Garganey, and Horned Grebe assuming breeding plumage and Black-necked Grebe in breeding plumage. In addition to the dowitcher, Dongtai produced Greater Scaup, Common Merganser, and endangered Far Eastern Curlew and near-threatened Eurasian Oystercatcher as well as early Bar-tailed Godwit, Barn Swallow, and Bull-headed Shrike and singing Chinese Grey Shrike. Yangkou gave us early Black Drongo.

On Fri. 18 March Elaine and I left our apartment near Zhongshan Park in a Skoda Scout rented from Avis. We picked up Kai at his home in Jiading, Shanghai and drove to the ferry terminal on Changxing Island in the Yangtze River. Our plan was to take the ferry to Hengsha Island. The ferry was fogged out until at least 07:25, at which time we gave up and drove to Chongming. We noted 49 species there, our chief stops being a place rich in Common Snipe near the base of the eastern sea wall and the aforementioned canal where we found the goldeneye and grebes.

Sat. 19 March saw us note 60 species around what Elaine and I call the Great Dongtai Surf ’n’ Turf Birding Trail. We had a neap tide that crested around 10:00, leaving the shorebirds far out. The godwit showed the slightly upturned bill and was associating with Eurasian Curlew, as was our lone Far Eastern Curlew. The dowitcher was far inside the sea wall and visible only through the spotting scope. It was showing more brown than grey and no orange. It had a long, seemingly straight bill like a snipe but unlike a typical snipe was alone in an area far from cover. We observed a clear sewing-machine feeding motion.

Intensive work is under way around the southeast corner of the reclaimed area. Digging machines were working throughout the weekend dredging up canals, changing forevermore areas where only last year Elaine and I found breeding Common Tern and territorial and possibly breeding Pied Avocet. The plan, clearly spelled out on the billboards near the tourist facilities, is to give nearly the entire reclaimed area over to aquaculture. The Great Dongtai Surf ’n’ Turf Birding Trail offers the best coastal birding within 500 km of Shanghai, it is a critical staging area for Nordmann’s Greenshank and Spoon-billed Sandpiper, it is relied upon by Black-faced Spoonbill, Great Knot, and Far Eastern Curlew–and it is being transformed, utterly. How interesting it is to be birding at this moment in history on the Chinese coast, scene of an ecological disaster like few ever seen before.

On Sunday morning 20 March we again covered the Surf ’n’ Turf Trail. We moved down to Yangkou in the afternoon, and we sneaked in an hour’s worth of birding at Chongming on the way back to the city. At Yangkou we failed to note Brown-cheeked Rail at the spot where I have seen the species three times before. We used playback off and on for about 45 minutes and got no response. Reed Parrotbill were in the area. At the snipe spot on Chongming, I photographed as many of the flushed snipe as possible, trying to find Jack, Pin-tailed, or Swinhoe’s. The photos I got show only Common Snipe.