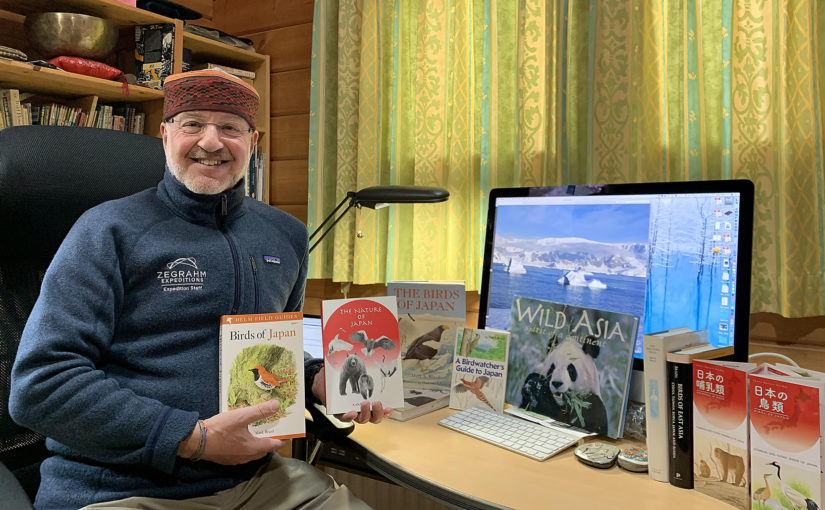 Craig Brelsford: Thank you very much, Mark, for doing this exclusive email interview with shanghaibirding.com. Before we begin, please allow me to inject a personal note. No field guide mattered more to me in Shanghai than your Birds of East Asia. I consulted it daily and eventually had to hold my copy together with packing tape. Birds of East Asia is one of the most consequential books I have ever read, and it is not often that a reader can interview the author of a book that has meant so much to him. It is therefore a thrill and a privilege to have you here. I am certainly not alone in my respect for you. Among China-based birders, especially those of us in Shanghai and the other coastal provinces, you hardly need an introduction. There may be some, however, who would like to know more about you. Who is Mark Brazil?

Mark Brazil: I was born in Worcestershire, England, and educated at Alcester Grammar School, Warwickshire, then Keele University, Staffordshire and finally went to Stirling University, Scotland for my Ph.D. Research for my doctorate also took me to Iceland for three summers and to northern Japan once in winter.

As a child I was drawn to natural history first through reading, then through exploring the local countryside on foot and by bicycle. I became a birdwatcher at age 13 and began exploring my home county of Worcestershire, then steadily traveling ever further afield in search of birds. As an undergraduate student in the mid-1970s, I made many journeys around the U.K. by hitch-hiking, and extended my travels overseas with trips to Turkey and Guyana at a time when few U.K. birders were heading in those directions. Then, as a postgraduate student, I traveled to Iceland, Argentina, Brazil, and Kenya, always for birds (and other wildlife) and always on a tight budget. An international conference on swans and cranes, held in Sapporo, Japan in February 1980, gave me my first opportunity to travel to Japan. At that time my Ph.D. research was in avian behavioral ecology, and the Whooper Swan was my study species. That first visit to Japan opened my eyes to a fascinating culture and avifauna. I was hooked, fell in love with Hokkaido, but never imagined that one day it would become my home. I now live in the buffer zone of the Akan-Mashu National Park in east Hokkaido.

Brelsford: What projects are you currently working on?

Brazil: Peking University Press has just published a Chinese edition of Birds of East Asia, which is a major milestone for me, as it is the first of my books to be translated into a second language.

Next in line are two more books about Japan. The first is about the natural history of the entire archipelago, which is set to be published by Princeton University Press in 2021. The second is a travel guidebook devoted to the national parks and other wild places of east Hokkaido, which will be published by Hokkaido Shimbun, also in 2021. Both books are designed for naturalists and travelers, but inevitably they contain much that will be of interest to birders traveling in Japan.

I love learning about birds and wildlife, and the way I process what I learn is to write about it. That means that I always have a project to occupy my time.

Brazil: While the publisher has expressed interest in a second edition of Birds of East Asia, I feel it may take more pressure from the reading and birding public to see them make a positive move towards the next edition.

In a second edition I would like to see updates to cover the many new discoveries of species breeding in the region, along with improvements to some of the early artwork. It will take a huge amount of work and collaboration from birders in the region, but will be a challenge well worth undertaking.

Brazil: My experience birding in China is far more limited than I would like, but I spent a season working on the northern Bohai Gulf southwest of Panjin, writing a management plan for a national nature reserve and studying the breeding biology of Saunders’s Gull. I was thrilled to be there during spring migration, when every day brought surprise migrants. There have been so many avian thrills for me in East Asia, from small islands off the Korean Peninsula to tiny islands in the Bering Sea, from Chukotka, Kamchatka and the Kuril Islands to Kyushu and the Okinawan islands, but much of my pleasure in birding comes from watching day-to-day changes on my local patch, or returning over and over again to the same location at different seasons. I am not a lister—except for my bath list!

As a young teen-aged birder in the U.K., I was enthralled by a painting I saw of a Steller’s Eagle—it became my dream bird. Little did I know then that one day I would not only visit its wintering grounds in Japan, but also its breeding grounds around the Sea of Okhotsk (one of my favorite areas on Earth). The biggest thrill for me, after moving to my current home in east Hokkaido, was seeing a Steller’s Eagle fly overhead while I was relaxing at home in my outdoor onsen (hot spring)! Can there be a more thrilling garden bird?

Brelsford: What took you to Japan? What keeps you there? What fascinates you about the birds of Japan and East Asia?

Brazil: My first visit, as I mentioned above, was to attend that conference in 1980. Then, as a “Margaret Thatcher refugee,” I left the U.K., not wishing to join the swelling ranks of unemployed and overqualified scientists. I traveled in Malaysia and subsequently settled in Japan for a while in the early 1980s, which gave me the opportunity to explore the country and led me to write A Birdwatcher’s Guide to Japan, published in 1987. That was a case of my writing a book I wished I’d had when I first arrived.

I find the Japanese landscape attractive, the culture fascinating, and the wildlife exciting. Island biology is a fantastic field of interest, and Japan offers so many wonderful examples. After a career in television in New Zealand and for Japanese television, I had another opportunity to work in Japan, this time as a university professor—that led me to settling here in Hokkaido in 1998. I met my wife, who is from Hokkaido, a few years later, and we have made Hokkaido our home. I always dreamed of living in east Hokkaido, close to some of my favorite areas for birding and hiking, and that dream came true when we moved to Teshikaga in April 2018.

Working in the expedition cruise industry has allowed me to travel extensively along the coast between Hong Kong and the Bering Strait, but I would love to travel more within the continent.

Brelsford: Writing field guides is a monumental undertaking. Why do you write field guides? What is the biggest motivator that keeps you going when you are feeling the most bogged down?

Brazil: I am driven by the desire to make available the books I wished I had had at my disposal when I first came to Asia. I see books and guides as rungs on a ladder. Each new book, each new edition, has the opportunity of climbing a rung or two higher than the one before, allowing the reader to jump-start their own learning. Just think how much more I could have learned if I could have started in 1980 with the books we have available now. Even today, there are books that should be out there that no one seems to have written yet, so I end up working on them myself.

There are many stages of field guide writing when becoming bogged down is likely, as there are so many steps between the concept and the final product. The first writing phase is all excitement as the body of work builds, and it all seems too easy. Corresponding with collaborators and advisers is exciting too, as new information invariably emerges. The endless fact-checking, the checking of the edited version, the proofs and the maps all become tedious, but by then the final goal is nearing and the underlying emotion is how great it will feel when it is over!

• Mark Brazil’s Birds of East Asia and Birds of Japan receive prominent mention on the shanghaibirding.com page Field Guides to the Birds of Shanghai

Featured image: Author and naturalist Mark Brazil poses with copies of the books he has written. (Mark Brazil)