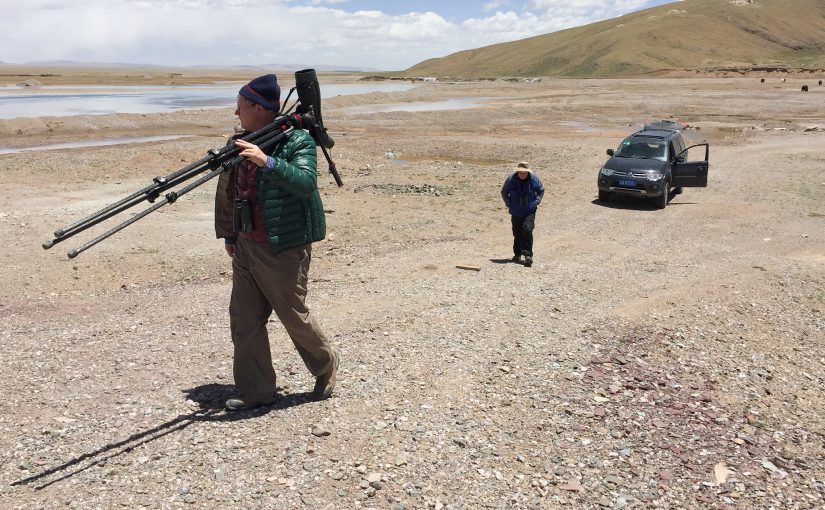 Elaine Du and I spent the first two weeks of the Qinghai birding expedition, 26 June to 10 July 2016, with Shanghai-based British birder Michael Grunwell and his old friend Mark Waters. We covered a vast area, ranging from Huzhu County on the Gansu border in northeast Qinghai to Ga’er Monastery (31.829966, 96.487758) in southern Qinghai, near the border with Tibet.

Among the 136 species of bird we found were 40 of Michael’s 45 hoped-for lifers. Highlights:

5 Ibisbill on tributaries of Mekong River in Nangqian County

1 Black Woodpecker at Baizha Nature Reserve. Black Woodpecker is one of several species whose ranges cover northern-temperate Eurasia in a band from Europe to northeast China then spur southwestward to the Tibetan Plateau

16 Sichuan Tit in Kanda Gorge and at Baizha Nature Reserve

11 Plumbeous Water Redstart, all at lower elevations at Baizha

107 Kessler’s Thrush at various sites, usually in high-altitude forest and scrub, sometimes around farms and villages

3 White-winged Grosbeak near Chaka and in Kanda Gorge

9 Blanford’s Snowfinch in semi-desert and high steppe, sometimes occurring alongside its congener Rufous-necked Snowfinch, which we usually were finding in slightly wetter habitats

The next morning, Mon. 27 June, in the gardens near the hotel we noted singing Siberian Rubythroat. Juvenile Hodgson’s Redstart were numerous, a Chestnut Thrush was collecting worms, and we found Chinese Nuthatch and Elliot’s Laughingthrush.

After breakfast, driving along the Datong River, we quickly found Michael’s target species, Gansu Leaf Warbler. It was making its easily recognizable trill from the crown of trees near the busy S302. The warbler did not show. Thinking we would find plenty of Gansu Leaf Warbler elsewhere, we drove to Zhalong Gou Scenic Area. There we noted Large-billed Warbler and Greenish Warbler but no more Gansu Leaf Warbler.

We doubled back to the hotel and checked out. We drove northwest on the S302. We enjoyed extended views of Gansu Leaf Warbler in a stand of conifers at 36.973133, 102.441300. At the pass and at the areas below the pass we found Blue-fronted Redstart and heard Chinese White-browed Rosefinch.

A BAGFUL OF LIFE BIRDS AT QINGHAI LAKE

Tues. 28 June was a banner day that saw Michael tick 13 lifers. We awoke at dawn to the sound of Black Redstart singing from the top of a nearby building. Alpine Chough flew over the heads of the crowd of tourists watching the sun rise. We drove west of Heimahe on the G109. Along the way we found Ground Tit and Rock Sparrow nesting in cavities on the wall of a ditch. We stopped at KM 2189.5 (36.778749, 99.653861) on the G109. Among the highlights there were Przevalski’s Finch, White-browed Tit, Tibetan Snowfinch raising young, and three species of accentor: Robin Accentor, Brown Accentor, and Rufous-breasted Accentor.

Kessler’s Thrush was singing at the top of the scrub-covered mountain (36.778217, 99.660255). I walked to that point, noting Twite and breeding Siberian Stonechat. Alpine Leaf Warbler were carrying cropfuls of grubs for their young, and Himalayan Vulture made a low flyover. We noted trip-first Upland Buzzard.

The long climb up the scrub-covered hill by KM 2189.5 tired everyone out. We drove back to Heimahe and rested.

The rubythroat and tit-warblers were lifers for everyone but me. We also had Robin Accentor and Alpine Leaf Warbler. We failed to note Smoky Warbler and White-browed Tit, species I had noted on that hill in 2013. We found 10 White-lipped Deer, a species we have seen regularly at KM 2189.5 (36.778749, 99.653861) as well as on Tit-Warbler Mountain.

Michael was particularly happy, and everyone was amazed at the panorama of mountain, scrub, and pasture. High clouds softened the intense sun. We could see our Pajero in the valley far below, and in the hazy distance Qinghai Lake was blue, like a sea.

As we were watching the rubythroat, a pair of young Tibetan men arrived. They had seen us in the valley and followed us. One of the pair hardly spoke Mandarin, but the other was fluent, having attended university in Nanchang, capital of Jiangxi. As Michael spent two years in Nanchang, we immediately had something to talk about. The young man said he would like to go abroad but cannot, because the Chinese government will not issue passports to young Tibetans. The Qinghai that for me is a paradise of birds and clean air is for this young man a place of restrictions and dilemmas. To be fair, though, one must note that just a few decades ago a university education for a Tibetan would have been unthinkable.

Driving back to Heimahe, we found Common Tern in a pond on the outskirts of town.

In the afternoon we drove 22 km (14 mi.) to Rubber Mountain Pass (36.754213, 99.606705), elev. 3817 m (12,520 ft.). Just below the pass we found Güldenstädt’s Redstart, a lifer for everyone in our party but me. We crossed the pass and on the Chaka side soon noted the transition from an alpine to semi-desert environment. The birds were different: Common Rock Thrush, Common Swift, Blanford’s Snowfinch, Desert Wheatear.

We found the ground jays in the late afternoon, after rainstorms had cleared the already very clean air. The air was cool and refreshing, the views superb. The Chaka area is the very definition of a basin. Mountains, the higher ones lightly dusted with newly fallen snow, surround the ground-jay spot. The vegetation is old; the woody bushes occupy little clumps of earth created by the holding action of the roots over the decades. The ground jays perch atop the bushes.

Fri. 1 July saw us note Przevalski’s Redstart and Pine Bunting. We drove 82.7 km (51.4 mi.) west from Chaka to the turnoff at KM 2335.5 on the G109. We negotiated the dirt road carefully in our high-clearance Pajero. We parked at the entrance to the valley. Nothing had changed since my last visit in 2013. Chinese Juniper Juniperus chinensis stud the slopes, some of the trees centuries old.

Przevalski’s Partridge did not appear, so I climbed to the ridge, elev. 3990 m (13,090 ft.). Michael, Mark, and Elaine stood ready below, around the spotting scope. I saw a nesting pair of White-throated Redstart at 3960 m (12,990 ft.). I reached the ridge and walked into the next valley. I heard a single Przevalski’s Partridge calling, but Michael and Mark weren’t going to climb 400 m (1,310 ft.) from the valley floor to get to this valley. I returned to the ridge and walked back down. En route I noted Blue-fronted Redstart and Alpine Leaf Warbler. White-lipped Deer were in the scrub.

Michael walked up the valley to meet me. At 36.462925, 98.50332 he found Przevalski’s Redstart. He radioed me with the news, and I scrambled down the valley toward him. A male and female were together. Michael, Mark, and Elaine had a life bird.

Another interesting record today was Mongolian Lark found at KM 197 on G214 south of Gonghe (共和). The elevation at that spot is 3110 m (10,200 ft.). This region of Qinghai must be the far southern extension of the range of Mongolian Lark. Just south of KM 197, the land tilts upward, the average elevation is higher by about 1000 m (3,280 ft.), and the vegetation changes from high-arid to alpine.

On Sun. 3 July our team drove west of Maduo-Machali to Eling Lake, one of the sources of the Yellow River, which is the source of Chinese civilization. At the place where China begins, we found 225 Common Merganser, 250 Bar-headed Goose, 2 Red-crested Pochard, 1 Common Pochard, and 27 Himalayan Vulture devouring the carcass of a sheep. On the high-altitude steppe between Maduo-Machali and the lake we found 2 Black-necked Crane, 27 Tibetan Wild Ass, 25 Tibetan Gazelle, and a Tibetan Fox.

Here near its source China’s Mother River runs clear and cold, a mountain stream. The steppe is remarkably flat and vast. Sunset was a marvel.

After the sun set, we chose a spot on the range and set up my spotting scope. We saw the bands on Jupiter as well as the moons of that giant planet, and we saw the rings of Saturn. The Milky Way was so bright, it looked like haze.

Driving back to Maduo-Machali, our headlights caught the eye shine of a plump little Pallas’s Cat. Crossing the road were 2 long-eared, whip-tailed Mongolian Five-toed Jerboa.

On 4 July, our team crossed the Yellow River and the Yangtze River in the same day. We drove from the Yellow River town of Maduo-Machali to Yushu-Jiegu, the major Tibetan cultural center just south of the Tongtian River, i.e., the upper Yangtze.

GET THEE TO THE NUNNERY (IN KANDA GORGE)!

Tues. 5 July: In China, Buddhist sites are famous for doubling as nature reserves. Take for example the nunnery in Kanda Gorge, north of Nangqian in Qinghai. Nestled deep in the canyon, the steep limestone walls holding the world out, the nunnery is a refuge for Tibetan Partridge and Tibetan Babax, species endemic to the Tibetan Plateau. Today I had the pleasure of watching Michael Grunwell, his old friend Mark Waters, and my wife Elaine add them to their life list.

We counted 72 Common Rosefinch, most of them in large flocks assembling toward sunset. We found it strange that the rosefinches would be forming large flocks during breeding season.

We’re in Nangqian, Qinghai. Today Elaine talked Blood Pheasant with Tibetans. We are trying to find Blood Pheasant in Baizha Forest and thought these gentlemen may know where to go. Craig admired a fine painting of male Hodgson’s Redstart outside our hotel room in Nangqian. What a nice touch, honoring your local birds in your hotel.

Michael Grunwell used my scope to scan the slopes around Ga’er Temple, Nangqian County, Yùshù Prefecture, Qinghai. In the background you could see one of the main buildings of the temple clinging to the mountain at the lofty elevation of 4200 m (13,780 ft.). While we scanned, friendly Tibetan monks and pilgrims passed by, Bearded Vulture passed overhead, no less than six species of crow were making a living, Kessler’s Thrush and Rufous-breasted Accentor added beauty, and half-tame Blue Sheep were clinging to the cliff faces.

QINGHAI UPDATE: Hello Shanghai Birders from beautiful Yushu, Qinghai! This past weekend, the second week of Elaine’s and my Qinghai expedition ended with Blanford’s Rosefinch, Black Woodpecker, and White Eared Pheasant at Baizha Forest on Fri. 8 July and on Sat. 9 July Tibetan Babax at mouth of Kanda Gorge and Ibisbill in stream along G214.

Featured image: Michael Grunwell (L) carries spotting scope to view waterfowl on Eling Lake, near the source of the Yellow River in Guoluo Prefecture, Qinghai, 3 July 2016. To the right is Mark Waters, Michael’s old friend from England. In the background is our rented Mitsubishi Pajero. Craig Brelsford and Elaine Du were in Qinghai from 26 June to 21 August 2016. We spent the first two weeks of our expedition with Michael and Mark and noted 136 species. (Craig Brelsford)

“Qinghai, June-August 2016” contains an introduction and six parts. This is Part 1.

Featured image: Birders walk near the shore of Eling Lake, a part of the young Yellow River. (Craig Brelsford)