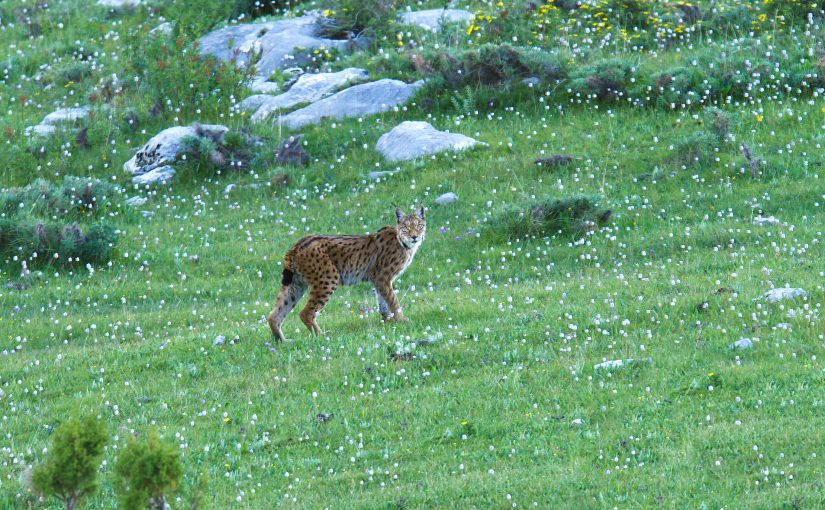 This post covers the third and fourth weeks of our two-month birding expedition in Qinghai. The third week, 11-17 July, took place entirely within Yushu Prefecture and featured the arrival of Beijing-based Swedish birder Jan-Erik Nilsén. The highlight of this segment, and indeed of the entire expedition, occurred in Week 3, when we found Tibetan Lynx (above). We noted 93 bird species, discovered new birding sites, immersed ourselves in Tibetan Buddhist culture, and saw evidence of attacks by Brown Bear.

The scrub delivered close views of White-browed Tit and White-browed Tit-warbler as well as Common Cuckoo and Greenish Warbler. In the streams were Ibisbill, White-throated Dipper, and Brown Dipper. Bearded Vulture, Himalayan Vulture, and Golden Eagle soared above. Among the most conspicuous birds were Kessler’s Thrush (39), found mainly around the scrub, and on the grassy slopes Brandt’s Mountain Finch (50) and Tibetan Snowfinch (25). We noted a single Snow Pigeon.

I’d waited nearly half a century to glimpse a lynx. My partners also had never seen a lynx. This is the Central Asian subspecies of Eurasian Lynx, also known as Himalayan Lynx and Turkestan Lynx. We found the lynx at elev. 4550 m (14,920 ft.).

Lynx roam throughout the Northern Hemisphere and are mainly associated with boreal forests. Alpine meadows at 4550 m (14,920 ft.) may not be classic lynx habitat, but our specimen was very much well-suited—a sleek, supple, healthy cat, probably feasting regularly on the Blue Sheep, Himalayan Marmot, Plateau Pika, Woolly Hare, and gamebirds that are abundant at Kanda.

The next morning, 15 July, just below Kanda Pass (at 32.310031, 96.607089), Jan-Erik’s sensitive ear once again proved its worth. He correctly assumed that the rosefinch in front of us was not the more commonly noted Pink-rumped Rosefinch but Himalayan Beautiful Rosefinch. I recorded the call of the individual shown below:

The reports of bear aroused our curiosity, and we scanned the slopes and ridges looking for one. We found none, but our search bore fruit with good views of Sichuan Deer Cervus canadensis macneilli and at dusk a distant view of White Eared Pheasant.

On the grounds of the school, birds roamed freely and fearlessly. Large-billed Crow cawed throughout the day, Elliot’s Laughingthrush were ubiquitous, Kessler’s Thrush used the lawns, and Slaty-backed Flycatcher called from the copses. There were three species of pigeon: Snow Pigeon, Hill Pigeon, and Oriental Turtle Dove. The trill of Pink-rumped Rosefinch was commonly heard, and Hodgson’s Redstart and White-throated Redstart were the two main representatives of Phoenicurus. Salim Ali’s Swift and Eurasian Crag Martin were in the area, and we noted Red-rumped Swallow.

We spent the night of 17-18 July at Yùshù Kōnggǎng Jiǔdiàn (玉树空港酒店). This hotel is a good choice for birders needing a rest after days birding at high altitude. The restaurant is good and the shower in your room is separated from the rest of the bathroom. We paid 320 yuan per night.