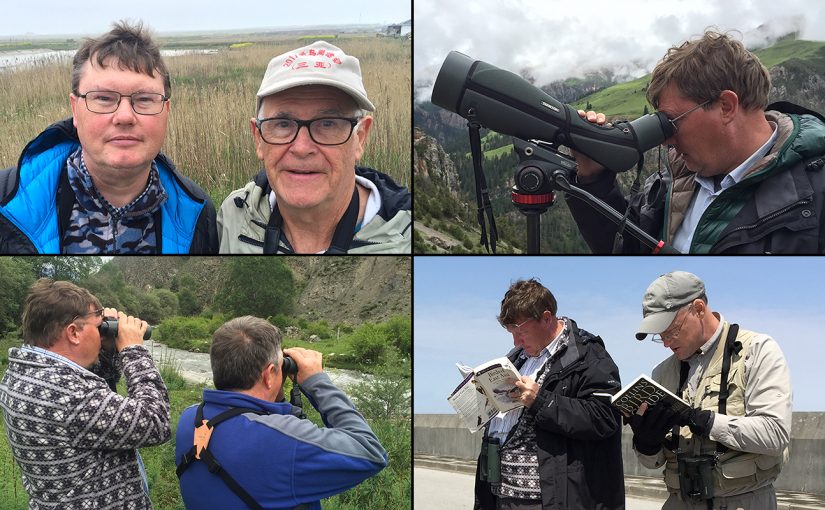 Michael Grunwell (above) is a British birder who last month moved from Shanghai to Penang, Malaysia. Michael spent four years in China, two in Nanchang and two in Shanghai. During that time, amid a full-time career and while providing for his wife and three children, Michael noted more than 700 species of bird in the Middle Kingdom. As if his personal commitments were not challenging enough, Michael faced another obstacle: a lack of “gen,” or basic birding information. In this essay, Michael contends that in China, getting gen is too difficult. Among “people in the know,” writes Michael, a “cheery, clubbable atmosphere” stifles the free flow of information. “China needs a great deal more published articles on sites and species,” he maintains, and he looks forward to a day when birding info in China will be “logged by and accessible to all.” — Craig Brelsford

by Michael Grunwell
for shanghaibirding.com

Exactly 33 years ago, I went on an independent birding trip to Peru. We faced Maoist insurrection and genuine danger—and we had better gen on where to find birds than China has in 2017.

China needs a great deal more published articles on sites and species. It is not right that most of the birding days in various bird-rich parts of China are unpublished and unavailable.

There seems to be a cheery, clubbable atmosphere which stifles real gen.

Take Sichuan, for example. Most Western birders on a trip to that province are taken to major sites such as Labahe and Balangshan. Very little precise gen is ever published about where species are seen.

Glowing accounts of yet another glorious China trip are written up by the tour companies and uploaded to Cloudbirders. These so-called “reports” are devoid of precise gen and should be seen for what they really are, which is infomercials.

With the growing popularity of bird-observation sites such as eBird, it has never been easier to make records that are timely, accurate, and most important, public. I note that the vast majority of the eBird hotspots in Sichuan have lists posted by independent birders—and almost no tour companies.

I do not agree that freedom of information damages commercial guiding. Take Turkey, for example. Although the main birding sites in that country are well-known, birders still pay big money for tours, because most people who go on tours are not list-obsessed but just normal people who want a hassle-free trip. I published a report on sites around Istanbul 13 years ago; a few years ago, I saw an advert for a bird tour going to the same places for a handsome price.

Another example is Sri Lanka. All the sites for the endemics are well-known. I recorded all the endemics in only five and a half days in 2011, and I wrote a full report that did wonders for my guide’s business.

Other examples are Florida, Arizona, The Gambia, Majorca, and even my home country, the United Kingdom. In all these cases, there is more than enough accurate, precise gen amid a thriving bird-tour industry.

In stark contrast to the foregoing stands China. It still astonishes me that, time and time again during my four years in China, I had to rely on a handful of trip reports for basic gen. China has a population of 1.4 billion, and there is no simple, clear Web site giving basic information on the Top 10 birding sites in western China!

I want every day’s birding in China to be logged by and accessible to all. Am I idealistic? Indeed I am. Knowledge about Chinese birds needs to grow, and fast. We must escape the current sclerotic situation, in which keen birders are waiting for crumbs to be thrown from the table of those in the know.

If you want an example of what the future could be like, then look no further than this Web site, shanghaibirding.com. Craig Brelsford is committed to cooperative birding, providing complete and precise details of bird sightings and birding locations. On Shanghai Birding, the companion WeChat group, Craig and other users regularly post news of and directions to sightings within minutes of discovery.