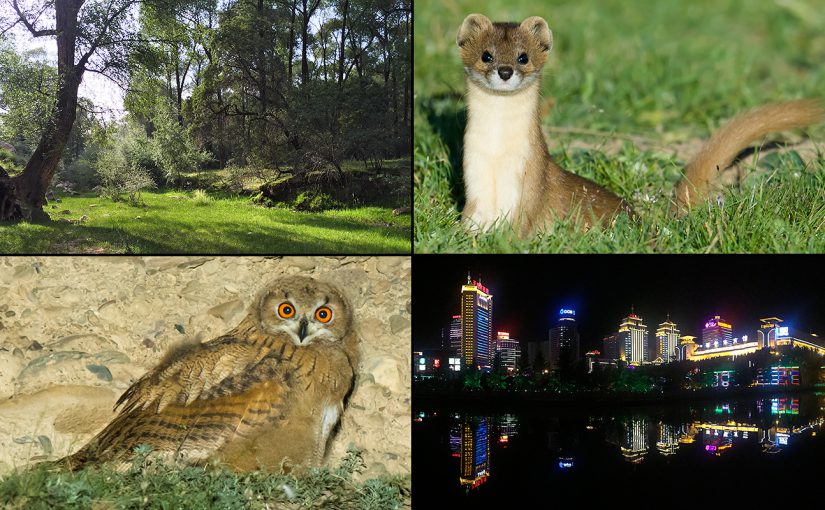 This post covers the fifth and sixth weeks of my 8-week expedition to Qinghai with Elaine Du. In this segment we birded mainly in Qilian County in northern Qinghai. The featured image above shows some of the highlights. Clockwise from top left: poplar forest along Heihe River, Mountain Weasel, neon lights of Xining, and Eurasian Eagle-Owl.

Our first three days back out, 30 July–1 Aug., saw us cover the area between the capital of Qinghai and Qilian Xiancheng, 300 km (186 mi.) to the north. The G227, the main Xining-Qilian highway, offers much good high-altitude scenery and good scrub but in tourist season is packed with cars. The S302 and S204 are less busy.

This leg brought us the family of Eurasian Eagle-Owl, found in pitch darkness on a dirt road along the Yong’an River, followed the next day (31 July) by views of Siberian Roe Deer and near-threatened Mountain Weasel. We found the eagle-owls, two adults and a juvenile, on a cliff (37.676941, 101.270580) at 3220 m (10,560 ft.). The family consisted of two adults and a juvenile. They were calling to each other, a hoarse yipe:

• Qilian Xiancheng, a tourist center occupying a stunning location on the Qinghai-Gansu border, teems with tourists and has many restaurants and stores. There we recorded Spotted Dove, a species that in Haibei Prefecture is near the western edge of its range.

• An interesting spot is 38.117957, 100.190286, a conifer forest 12 km (7.5 mi.) south of Qilian Xiancheng on the S204. There we noted Black Woodpecker, Rufous-vented Tit, and Willow Tit (ssp. affinis). Many other conifer forests cling to the slopes around Qilian Xiancheng. This one was the easiest to access.

The highlight of our time in Haibei was finding forests of Small-leaf Poplar Populus simonii along the Heihe River and Babao River near Qilian Xiancheng. The best forest is across the Heihe River from Dipanzi Village at 38.212130, 100.160214, elev. 2650 m (8,690 ft.). Among the trees, some of which are 300 years old, we found singing Gansu Leaf Warbler. This is probably a previously unknown breeding site of this little-known species.

The Gansu Leaf Warbler at the Dipanzi forest were singing in the same fashion as on 27 June, when Elaine, Michael Grunwell, and I found the species in coniferous habitat in Huzhu County (36.973133, 102.441300). The song consists of quickly delivered opening tzit fragments, usually followed by a sharp trill:

Birding the Qilian Mountains of Northern Qinghai (you are here)