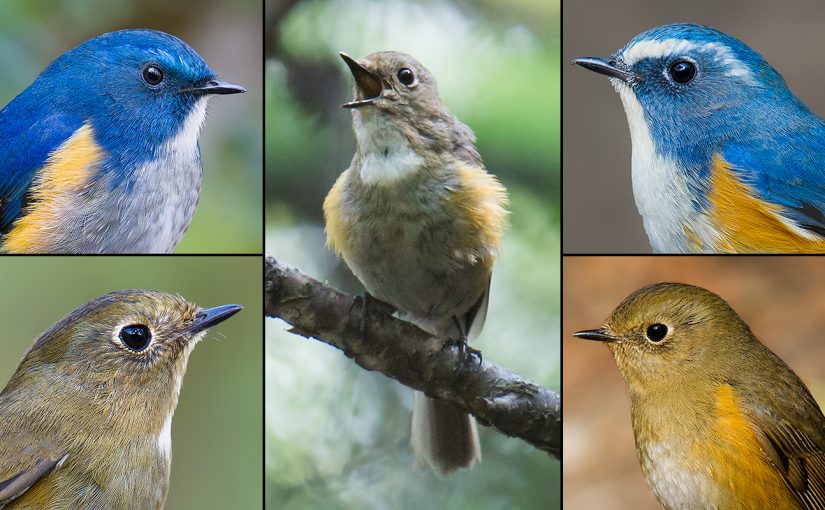 Our featured image above shows the bluetails of the world: Himalayan (left panels), Red-flanked (right panels), and in the middle the inscrutable “Gansu” Bluetail. In this post, I report a new eastern record of “Gansu” and discuss the current taxonomic limbo of the form. — Craig Brelsford

Found at Wulingshan, Hebei, on 11 June: “Gansu” Bluetail Tarsiger (cyanurus? rufilatus?) “albocoeruleus.” Our record is the first for the mountain northeast of Beijing, the first for Chengde Prefecture in Hebei, and the easternmost in history for the form. Until recently, “Gansu” Bluetail was thought to breed only in Qinghai and Gansu, 1200 km (745 miles) to the southwest.

In Beijing, Hebei, and Shanxi, “albocoeruleus” has now been found on at least six mountains. Before our discovery, the easternmost of those mountains was Haituoshan, 140 air-km (87 air-miles) west of Wulingshan. Our record pushes the eastern edge of the range of “albocoeruleus” from the western side of Beijing to the mountains northeast of the metropolis.

The song of “Gansu” Bluetail is distinct from the songs of Red-flanked and Himalayan. Listen to “Gansu”:

Now compare the song of Himalayan Bluetail, by Mike Nelson via xeno-canto.org:

Listen to this other recording by Mike Nelson, also labeled “Himalayan Bluetail”:

The second recording by Nelson is of “albocoeruleus.” It was made in Haidong Prefecture in eastern Qinghai, a place known as a breeding site for “albocoeruleus.” Note the similarity between Nelson’s recording from Haidong and mine from Wulingshan.

Usually, a bird with a song as distinctive as that of “albocoeruleus” would rise to at least the subspecies level. Why, then, is “albocoeruleus” languishing in taxonomic limbo?

The reason may be a simple lack of research. Many species endemic or nearly endemic to China have only recently begun to be fine-tuned taxonomically. Green-backed Flycatcher Ficedula elisae, another bird we noted at Wulingshan, was long considered conspecific with Narcissus Flycatcher F. narcissina, despite the two species having widely separated breeding areas, highly distinctive plumage (especially males), and songs so different that playback of one species elicits no interest from individuals of the other (Clement 2006).

Zappey’s Flycatcher Cyanoptila cumatilis is another species that was long overlooked. It differs subtly but consistently from Blue-and-white Flycatcher C. cyanomelana but was not recognized as a new species until 2012 (Leader & Carey 2012). Zappey’s also breeds on Wulingshan.

Will “Gansu” Bluetail get the same love and attention as Green-backed and Zappey’s Flycatcher? Researchers surely must be aware of the taxonomic uncertainty surrounding “Gansu.” Its distinctive song is a cry in the wilderness, a plea for a more accurate assessment of its place in the animal kingdom.

How: Eschewing undependable air travel, Michael and I took the bullet train from Shanghai. What a ride! 305 kph (190 mph) and arrival in Beijing within a minute of the time scheduled. Then a driver hired by Jan-Erik picked us up for the three-hour drive to Wulingshan. The driver accompanied us there and drove us back to Beijing.

UPDATE, 24 JUNE: After an e-mail exchange with Paul Leader and Geoff Carey, I have changed my record of Zappey’s Flycatcher to Blue-and-white Flycatcher Cyanoptila cyanomelana intermedia. The bird we found at Wulingshan is a male in its second calendar year that has not attained full adult plumage.

Of this flycatcher, photos and sound-recordings of which Leader examined, Leader writes, “[T]he darkness of the throat on your bird is not correct for first-year Zappey’s. … Morphology fits intermedia. It certainly doesn’t fit cumatilis, and I don’t see any plumage features that indicate it’s a hybrid. I think it’s just a first-year intermedia, which accounts for plumage and perhaps the variation in song” (Leader et al., in litt., 2017).

For the song as well as for more photos of this individual, please see our eBird list for 11 June.

• We got impressive results in only a day and a half birding—albeit with perfect weather. Wulingshan can be done from Shanghai in a weekend!

• Special thanks to my partner ​Jan-Erik Nilsén. Jan-Erik heard the song of the bluetail, recognized it, and called me over. Jan-Erik is highly experienced with “Gansu” Bluetail, having seen and sound-recorded the form on Haituoshan as well as at Lingshan and Baicaopan (Beijing-Hebei), Xiaowutaishan (Hebei), and Wutaishan (Shanxi).

• Thanks also to Paul Holt for informing me about records of “Gansu” Bluetail in the Beijing area.