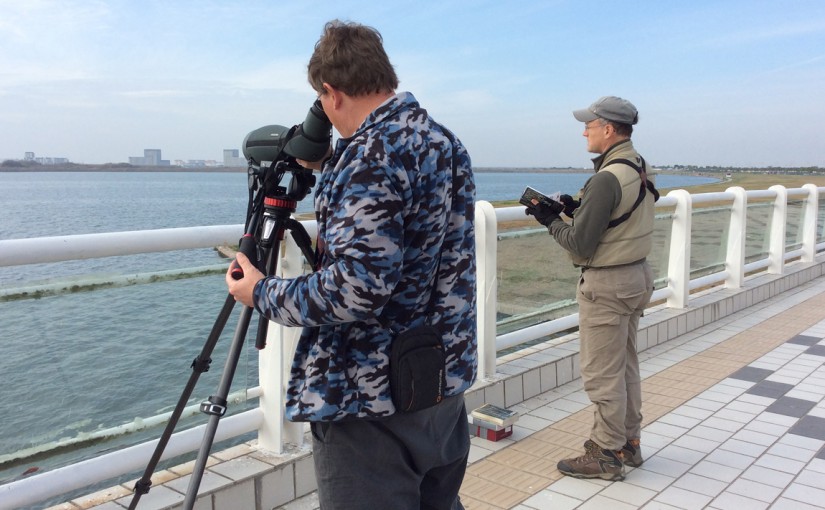 On 28-29 Nov., Elaine and I noted 98 species at three of the Shanghai region’s top sites: Lesser Yangshan Island, Cape Nanhui, and Hengsha Island. On Hengsha Main Pond we noted 3200 Falcated Duck. We noted Water/Brown-cheeked Rail at Nanhui and at Hengsha, and among the hundreds of ducks at Dishui Lake were 10 Greater Scaup as well as 15 Black-necked Grebe. A beautiful jack Merlin was grounded by rain on Hengsha, and another on Nanhui scared up a cloud of rather late Barn Swallow. Verditer Flycatcher resorted to the reeds in the treeless reclaimed area on Hengsha, and on Lesser Yangshan we saw juvenile Lesser Coucal. That tiny island was characteristically thrushy, with Red-throated Thrush and Naumman’s Thrush appearing alongside Dusky Thrush, Pale Thrush, Eyebrowed Thrush, and Chinese Blackbird, the latter not commonly seen on Lesser Yangshan.

The 9000 birds on Hengsha Main Pond were overwhelmingly of just three species: Falcated Duck, Gadwall, and Eurasian Coot, with sprinklings of Mandarin Duck, Common Shelduck, Common Pochard, and Black-necked Grebe. I had never seen so many birds in a single place in Shanghai Shi. The reclaimed area on which the pond sits is under no environmental protection; the area is slated to be turned into a giant container port.

Hengsha Main Pond is in the northwest quadrant of the reclaimed area, hard by the fenced border with Hengsha Island proper. We viewed the pond from the perimeter road, the other side of which contains farms and trees. While scanning and counting, we noted Hair-crested Drongo and Dusky Warbler. Earlier, in the reclaimed area we once again noted Chinese Grey Shrike and a single Water Pipit. We hadn’t seen Intermediate Egret in a while. Robin-like Red-flanked Bluetail were absent from the treeless reclaimed area, but chat-like Daurian Redstart turned into reed-bed specialists; we noted 18.

On Saturday Elaine and I were joined by veteran English birder Michael Grunwell. Lesser Yangshan was its typical late-November self, serving up its usual fare of Daurian Redstart, less common delicacies such as Yellow-bellied Tit, and a main course of buntings, this time Meadow Bunting, Little Bunting, Yellow-throated Bunting, and Black-faced Bunting.

The diversity of ducks on Dishui Lake was a welcome surprise. Common Shelduck appeared here as well, and we sifted through the Tufted Duck to find the Greater Scaup. The Mandarin Duck were seen on a pond inside the sea wall and attracted some photographers, who paid little attention to the nearby flock of 800 Kentish Plover.

At Nanhui as well as at Hengsha, we selected places likely to hold Water Rail or Brown-cheeked Rail. There, we played back recordings of Rallus aquaticus. On both occasions, we got a loud call from someplace deep within the reeds, but no appearance. While waiting at Nanhui, we noted a flock of Reed Parrotbill.

By positioning ourselves on Hengsha the night before we birded, we saved ourselves our typical early wake-up in the city and a dash to Changxing Island for the first ferry.