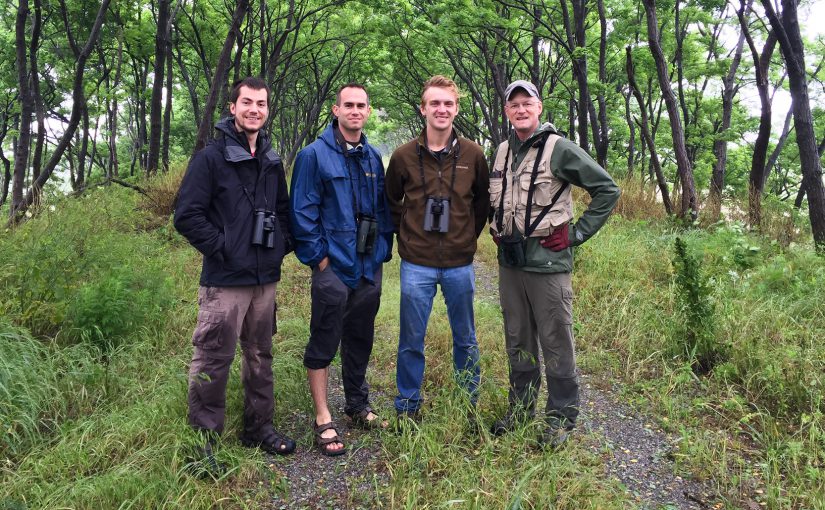 Elaine and I are in Heilongjiang and using the Shanghai Birding WeChat group to keep tabs on this eventful spring migration season. In recent days birders at Nanhui have reported

Before Elaine and I left for this extended visit with her family, we had the pleasure of birding with Ian Davies from eBird and his buddies Nick Bonomo and Luke Seitz:

Sat. 21 May
Dongtai and Yangkou

Yangkou-Dongtai today, Elaine and I with Ian Davies from eBird/Cornell and his buddies Nick Bonomo and Luke Seitz. Rain non-stop all day, extremely difficult conditions, missed Nordmann’s Greenshank and Spoon-billed Sandpiper but covered most other major waders, among them Great Knot, Red Knot, Broad-billed Sandpiper, Grey-tailed Tattler, and Eurasian Oystercatcher. We had a fun encounter with Grey Nightjar roosting on road in forested part of Dongtai Surf ’n’ Turf birding loop. Lifers were piling up for our three young American partners, all on their first trip to China.

Yangkou is still good for waders but continues to lose its appeal. Haiyin Temple Forest has been turned into a menagerie, with the obligatory captive Black Swan as well as Blue Eared Pheasant and—get this—a pair of ostriches! The trees remain but the undergrowth has been pared back, limiting the attraction of the migrant trap to thrushes, robins, and bush warblers. Entrance to the menagerie requires payment, but we got around it by saying we were birders. Entrance to the entire temple-seawall area requires ticket costing 60 yuan per person. The entire sea wall around Yangkou is now fenced off and access to mudflats is in some places denied, notably at the well-known point ca. 10 km south of town where we have seen Spoon-billed Sandpiper so many times. Dongtai meanwhile continues its own transformation, particularly in the southern parts of the reclaimed area.

Yangkou again today with Elaine and American birders Ian Davies, Nick Bonomo, and Luke Seitz. Spoon-billed Sandpiper photographed in flight by Ian after our 4-man group split up on mudflats to cover more ground. Despite relentless search could not find it again. While searching we saw thousands of Red-necked Stint and hundreds of other waders and got soaked in the misty rain. At long-disused Magic Forest we found 33 species in 79 minutes, with Northern Boobook, Lesser Cuckoo, Tiger Shrike, Narcissus Flycatcher, and Forest Wagtail leading the way. The Magic Forest has been locked since 2013, but a guard let us use the area today. It was wonderful to bird the old place again. Our partners were wide-eyed at the richness of the Magic Forest and impressed by the mudflats. Ian trained Elaine and me on the eBird reporting system.

Mon. 23 May
Yangkou and Nanhui

Yangkou and Nanhui today, Elaine, U.S. birders Ian Davies, Nick Bonomo, and Luke Seitz, and I (Yangkou), then Elaine and I (Nanhui).

— I had never heard Thick-billed sing before. This forest Acro was hidden in the crown of one of the locust trees in Microforest 1. The sound I recorded is below. The wind was blowing, lowering the quality of the recording, but the essentials are there. Note the typical raspy Acro sound, and note the much faster delivery of Thick-billed than that of its fellow Acro Oriental Reed Warbler:

— The cuckoos were in full breeding mode, chasing each other and calling constantly.

— Elaine and I spent the better part of an hour walking along the muddy bank of a canal looking for Middendorf’s Grasshopper Warbler. On 21 May 2015 at Nanhui, Kai Pflug, Elaine, and I found this species. Was that encounter a one-off, or is Middendorf’s Gropper a bird that would be recorded more in Shanghai were more birders looking for it? I still don’t have an answer to that question.