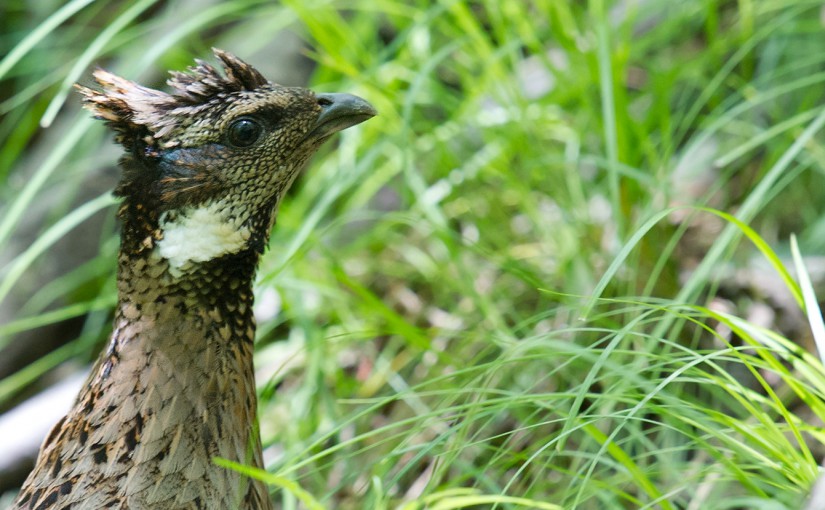 On Sunday 22 Nov. I completed a rainy three-day trip to the Tianmu Mountains, 270 km (170 miles) southwest of Shanghai. The highlight was 4 Koklass Pheasant on Saturday. My wife and partner Elaine Du and I found the pheasants on a long walk down the mountain road at West Tianmu Mountain Nature Reserve. We found several other common south China species rarely or never recorded in Shanghai, among them Chinese Bamboo Partridge, Collared Owlet, Grey-chinned Minivet, Grey Treepie, Rufous-capped Babbler, Streak-breasted Scimitar Babbler, White-crowned Forktail, and Little Forktail. Among the wintering birds were Dusky Thrush, Eyebrowed Thrush, and Mugimaki Flycatcher.

After many weeks spent watching migrating birds along the coast, Elaine and I noted the more settled character of the bird life in the big southern-temperate montane forest at Tianmu. Many of the species we saw have ranges that extend not much farther north than Tianmu.

On Saturday we took the bus to the parking lot at Longfengjian, the famous Japanese Cedar forest. We declined to pay 140 yuan per person to enter the forest. Instead, we walked the road back toward our hotel. The first Koklass took off from cover and flew down slope. A few bends and twists of the road below, we again heard the beating of pheasants’ wings. Finally, at a spectacular clearing about 3 km (2 miles) below Longfengjian, I got a view of a female Koklass startled into flight. I rushed to the edge of the slope, just in time to see her partner, a stunning green-headed male. In the high-quality habitat of Tianmu, large and well-protected, pheasants may be numerous.

At that clearing, the view the pheasants take in is superb, especially on a wet day, with clouds partly filling the valley below. The exercise, fresh air, and good birds put us in a fine mood. I was without my camera, not willing to carry it through the mist, and I reveled in my mobility. When I heard a Koklass calling from bamboo, I jumped in to take a look. I couldn’t find the pheasant, but no matter: The sound of a singing Collared Owlet quickly refocused my attention.

The forest around Longfengjian is mixed broadleaf-conifer. The moderately thick undergrowth is composed partly of short, wispy bamboo. The broadleaf trees are bare now, and the scene is reminiscent of colder, more northern climes. Farther down, more trees retain their leaves, the undergrowth is in places impenetrable, and bamboo grows in thick stands.

Elaine and I have now had a pair of Tianmu trips—one this past May and now this one six months later. The trips have given us a view of Tianmu at opposite ends of the year. We now better understand the southern Chinese flora and avifauna right at the doorstep of Shanghai, and we appreciate more than ever the transitional, north-south character of east-central China.

To view our checklists from this trip, go to eBird: