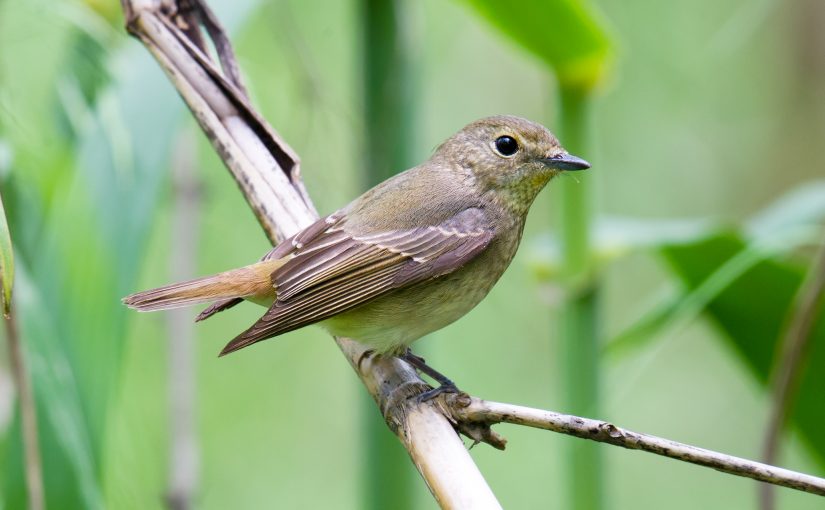 Does Green-backed Flycatcher Ficedula elisae migrate through Shanghai? Records exist of the species, but in my opinion they are mainly misidentifications of female Narcissus Flycatcher F. narcissina narcissina (above). In this post, I am going to unearth the roots of my skepticism about F. elisae in Shanghai and describe the differences between female F. elisae and female F. n. narcissina.

Each spring and autumn, birders in Earth’s Greatest City claim records of elisae. Invariably, the bird in question is a female, not the very distinctive adult male. Here our first red flag pops up: How likely is it that elisae is the one species of passerine whose records in Shanghai never involve adult males?

For the sake of argument, let us admit the possibility of an all-female migration of elisae through Shanghai. Fine, I retort; then show me photos of these purported elisae. The photos are duly supplied, and again and again, as has been the case throughout my more than 10 years in Shanghai, the supposed F. elisae is revealed on closer scrutiny to be female F. n. narcissina.

Indeed, I have seen better documentation in Shanghai of Ryukyu Flycatcher F. (narcissina) owstoni than of F. elisae; on 17 April 2016 at Pudong’s Binjiang Forest Park, Shanghai birder Zhang Xiaolei got a very interesting picture of a possible adult-male owstoni.

Mistakes of the sort many Shanghai birders are making contribute to a distorted picture of the presence on the central Chinese coast of a little-known species. What’s more, the mistakes are avoidable. Separation of female F. elisae and F. n. narcissina is usually straightforward.

Female F. elisae has greenish upperparts with a yellowish or olive tint. Female F. n. narcissina is greenish with a brownish tint, like female Blue-and-white Flycatcher Cyanoptila cyanomelana (above). On their underparts, female F. elisae is “dull yellow or yellowish-buff,” while F. n. narcissina is mainly off-white, with brownish-white flanks and a hint of yellow on the throat and belly (Brazil 2009, 436).

We can say, therefore, that unlike Pale-legged Leaf Warbler and Sakhalin Leaf Warbler, female F. elisae and F. n. narcissina are distinguishable by plumage. A good look or good photo will likely lead to an accurate ID.

Accurate records in Shanghai, one of the most thoroughly birded areas on the Chinese coast, will lead to better understandings of both F. elisae and F. n. narcissina. Already, the growing body of knowledge about these East Asian breeding endemics has led to the separation of F. elisae and F. n. narcissina into separate species. Previously, elisae had been treated as a subspecies of Narcissus Flycatcher.

We know as well that the summer and winter ranges of the sister species are disjunct, with F. elisae breeding in a very compact range in Hebei (Wulingshan), Beijing, and Shanxi and wintering in southern Thailand and Peninsular Malaysia. The breeding range of F. n. narcissina includes the main islands of Japan as well as the Kuril Islands, Sakhalin, and the coastal Russian Far East. The species winters in Hainan, the Philippines, and Borneo and passes through Shanghai each spring from about 15 April to 15 May.

Unlike other passage-migrant flycatchers in Shanghai, F. n. narcissina is much less common in autumn than in spring. That is a mystery, one of many surrounding the migration of the Narcissus Flycatcher group.

In light of the information deficit, it behooves us Shanghai birders to strive for accurate records (or non-records) of elisae in our region. Let us practice self-discipline, hone our skills, and give outside observers the clearest possible picture of bird migration in Shanghai.

Below are links to photos of female elisae:

The flycatcher was attracted by mealworms speared by photographers onto a soft steel wire. The wire was hung from a branch, enticing the flycatcher to hover to snatch the bait. The bird was appearing every 10 minutes.

I expressed concern but did not feel the need to be critical or intervene. The photographers obviously liked the flycatcher, did not think that they were harming it, and were enjoying themselves immensely.

I watched the flycatcher attack the mealworms. I think it unlikely that the wire would harm the bird. The bigger problem may be that the free protein will keep the bird here an unnaturally long time. A passage migrant through Earth’s largest city, Narcissus Flycatcher should be in Borneo by now.

On Thurs. 20 Oct. and Sun. 23 Oct., Elaine Du and I birded Nanhui and the sod farm south of Pudong Airport (31.112586, 121.824742). On 23 Oct. Elaine and I were joined by British birder Michael Grunwell. The two days yielded 92 species. After the Pomarine Jaeger, the big news was rare autumn sightings of Narcissus Flycatcher, another record of Nordmann’s Greenshank, and still more evidence that the highly threatened Nanhui wetland is much depended on by Black-faced Spoonbill.

On 20 Oct. in the canal at the base of the sea wall at Cape Nanhui, Elaine and I had 18 Mandarin Duck and 2 season’s first Greater Scaup. On 23 Oct., the Nanhui microforests yielded Eurasian Woodcock, Ashy Minivet, Siberian Thrush, Red-throated Thrush, and season’s first Pale Thrush. A male Siberian Rubythroat popped out of the undergrowth and a Northern Boobook dozed before a crowd of photographers. At the line of trees (30.859995, 121.910061) near South Lock, 6 km south of the Magic Parking Lot (30.882688, 121.972489), we had season’s first Tristram’s Bunting. Dishui Lake (30.908702, 121.945124) is attracting ducks again, the most notable Sunday being season’s first Tufted Duck and Common Pochard.

The sod farm, which we visited Sunday morning, and which lies just off the S32 freeway, was worth the small investment of time required to get there. The grassy area gave us an unusually large (80) group of Red-throated Pipit. At Cape Nanhui, we have been experiencing this species only in fly-by mode, but at the farm dozens of them were feeding on the ground. Michael and I studied the pipits carefully and concluded the group was pure Red-throated; we saw not a single Buff-bellied Pipit.

Ducks are once again gracing the canals and ponds of Nanhui. The most numerous were, as expected, Eastern Spot-billed Duck (285 over the two days) and Eurasian Teal (270 on 23 Oct.). Less numerous was Eurasian Wigeon, and there were sprinklings of Gadwall, Mallard, Northern Shoveler, Northern Pintail, and Garganey.

— Uniquely among the Shanghai region’s passage-migrant flycatchers, most of which appear in roughly equal numbers on both the spring and autumn migrations, Narcissus Flycatcher appears almost exclusively on the spring migration. We were therefore pleasantly surprised Sunday to see the three males and three females. Did Typhoon Haima send them our way? What are the migration patterns of this beautiful flycatcher?

— The importance of the Nanhui wetlands—as well as the dangers they face—can hardly be overstated. On 20 Oct. at the skua site, Hé Xīn told me that the defunct wetland in which we were standing would already have been utterly transformed by now had it not been for the intervention of Chinese birders, who secured a one-year delay. Within a radius of a few hundred meters of the skua site stood 24 endangered Black-faced Spoonbill and an endangered Nordmann’s Greenshank. The dependence of Black-faced Spoonbill on the defunct wetland reserve is obvious and could be demonstrated by a group of high-schoolers doing a science project. Shanghai lies at the mouth of one of Earth’s greatest waterways (the Yangtze River) and is a major point on Earth’s greatest migratory flyway—yet this wealthy city, a world financial center with a rich natural heritage, entirely lacks an easily accessible wetland reserve on its mainland. The one, weak attempt—the defunct Nanhui reserve, with its crumbling buildings, torn-up boardwalk, and rotting signs—stands near the gallows, in the nick of time being given a stay of execution. And yet, even now, the defunct reserve, mismanaged, unloved, and undervalued, even now the place still attracts Class A birds! When, oh when, will the Shanghai government and Shanghai people learn to value at their true worth their spoonbills, greenshanks, and vagrant skuas? When, I ask, will they see as an asset to be cherished, and not a burden to be cast away, the thousands of birds that migrate through Earth’s greatest city? When will the Shanghai people apply their renowned cleverness and skill to protecting, rather than dredging up the home of, the symbol of their city, Reed Parrotbill? When will Shanghai take a cue from Hong Kong and build its own Mai Po? When will it follow the example of Singapore and create its own Sungei Buloh?