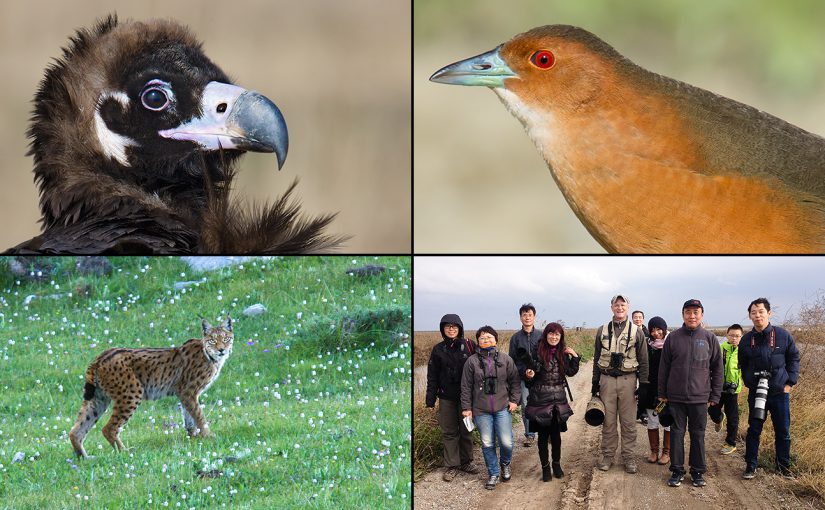 Editor’s note: My photos of the year, 2016. Clockwise from top left: Cinereous Vulture on Chongming Island in January kicked off a year that saw a parade of interesting sightings in Shanghai; ultra-rare Band-bellied Crake was the highlight of my three-week trip to a never-birded area of Heilongjiang; on 10 Dec. members of Shanghai’s ever-growing birding community had a big day out at Pudong’s Cape Nanhui; in a two-month expedition to Qinghai, meeting this Tibetan Lynx was my biggest thrill.

Happy New Year! This post is a photographic summary of my birding year 2016.

Unlike 2015, which saw Elaine Du and me visit the United States, in 2016 we never left China. We birded eight months in Shanghai, two months in Qinghai, and three weeks apiece in the Dulong Gorge in Yunnan and in Elaine’s hometown of Boli in Heilongjiang.

In a year that saw unprecedented numbers of good records in Shanghai, among them Nordmann’s Greenshank, Spoon-billed Sandpiper, Swinhoe’s Rail, Black-naped Monarch, Crow-billed Drongo, Fujian Niltava, and Slaty Bunting, Elaine and I were on hand to record some of the rarities.

One of the best was Cinereous Vulture. I got this photo on 23 Jan. on Chongming Island.

Pomarine Jaeger was discovered at Cape Nanhui on 19 Oct., a first for Shanghai. The next day, Elaine and I got this image.

A trio of Critically Endangered Siberian Crane took up residence on Hengsha Island around 12 Nov. On 7 Dec., I got this photo.

Here are images of birds more commonly noted in the Shanghai region.

From 16 Feb. to 5 March, Elaine and I were in Yunnan, where we explored the Dulong Gorge, a remote valley in the northwestern corner of the province. Birding there is excellent, and the views are sublime.

After days of rain, we were rewarded with this moon-set at dawn on 26 Feb.

We noted 170 species of bird at Dulong. One of the best was Grandala.

For its combination of stunning beauty and strong Himalayan character, Rufous-breasted Bush Robin was Craig’s Bird of the Trip.

Birds have plenty of places to hide in the thickly vegetated Dulong Gorge. Sometimes we got lucky, as with this Chestnut-headed Tesia.

Elaine and I spent most of the summer in Qinghai. We noted 195 species of bird, but our most unforgettable moment was supplied by a mammal. This is Tibetan Lynx.

Brandt’s Mountain Finch is hardy. It thrives at high elevations.

… while Isabelline Wheatear is master of the semi-deserts of Wulan County.

We had great partners in Qinghai. One of them was Michael Grunwell.

Landscapes in Qinghai are beyond beautiful. Here are my favorites.

A closer look at the dunes.

I used my iPhone 6 for this image of a Chinese Juniper gazing out at the Dulan Mountains. The tree clings to the slope at elev. 3960 m.

From 26 May to 12 June 2016, Elaine Du and I visited her home village of Dawucun in Boli County, Heilongjiang, China. The area was never properly birded before we arrived there, and our discoveries have been many. The biggest highlight was Band-bellied Crake.

Mandarin Duck breed in Boli County. We found this drake in a small pool deep in Xidaquan Forest.

In the Manchurian forest, woodpeckers abound. The most common species is White-backed Woodpecker.

Elaine Du is my wife and partner. The year 2016 was our third in a row of non-stop birding. Although she is happy birding and has put together an impressive life list, the Heilongjiang native is never happier than when she is in her hometown.

Through thick and thin we tough it out. Here we are smiling despite being confined to our tent during a rain shower at Hala Lake.

At Eling Lake in Qinghai, where the Yellow River and China are born, Elaine and I posed for this self-portrait.

Elaine is a little short, but she never gives up. In Dulong Gorge, she improvised a way to see Grandala, a life bird.

Elaine is proud of the remnant Manchurian forest near her home in Boli. Here we are in front of a stand of Silver Birch.

People like Elaine’s family put food on the table for the city folks.

In 2015 I started shanghaibirding.com and the Shanghai Birding WeChat group. In 2016, the number of readers of the Web site and members of the chat group steadily grew. On 10 Dec., the day of the Shanghai Birding Christmas party, I led a group of birders to Cape Nanhui. There we found a pair of Red-crowned Crane, a first for mainland Shanghai. Here is the group after the historic event.