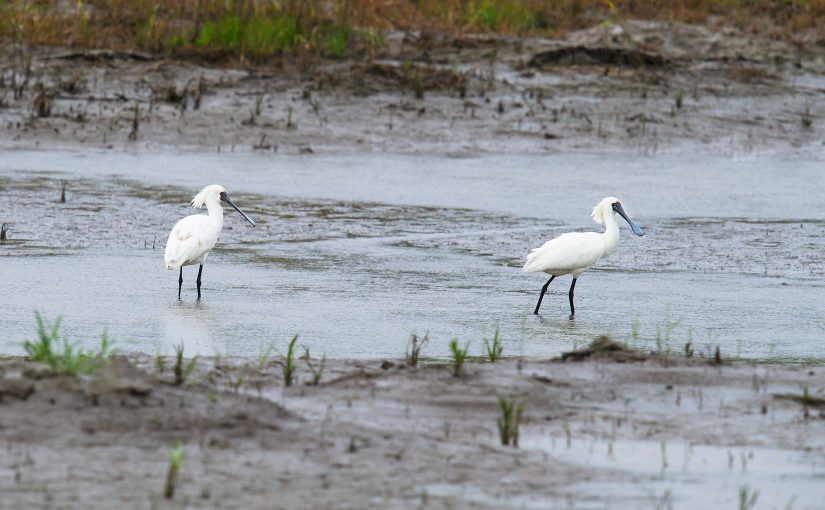 Elaine Du and I noted 86 species over the rainy weekend of 7-8 May 2016. We had White-shouldered Starling, Siberian Blue Robin, and Chestnut Bunting on Lesser Yangshan Island and Chinese Egret, Black-faced Spoonbill, and Curlew Sandpiper at Cape Nanhui. I got my best view of Sakhalin Leaf Warbler at Nanhui, and on Yangshan our partner Michael Grunwell got his best view of Yellow-rumped Flycatcher. Other passage migrants were Brown Shrike, Eyebrowed Thrush, Siberian Rubythroat, and season’s first Dark-sided Flycatcher at Cape Nanhui and Blue-and-white Flycatcher on Lesser Yangshan.

The nearly constant rain made birding challenging but had its good points. While depressing our bird count, especially on Sunday (just 62 species), the rain also depressed the number of visitors, giving Nanhui its former wild feel. The lack of tourists and their vehicles on Sunday allowed 9 Black-faced Spoonbill to exploit a good pond just a stone’s throw from the usually busy sea-wall road. The spoonbills, all sub-adults in non-breeding plumage, noted our car and went back to feeding. On that same pond on Saturday, we captured in a single photograph 6 birds representing five species: 2 Black-faced Spoonbill plus Intermediate Egret, Little Egret, Great Egret, and Chinese Egret.

Elaine and I came upon three other birds that are hard to ID to species level. The question of Pale or Sand Martin is nettlesome, as is separating Japanese Bush Warbler Horornis diphone canturians from Manchurian Bush Warbler H. borealis borealis. I know that the Shanghai region falls within the breeding range of canturians, but borealis very likely passes through this region, and Kennerley and Pearson suggest that migrating borealis may sing. Certainly some of the canturians/borealis that we see here are breeding canturians; the problem is singling one out with any certainty.

Another problem is the non-calling Cuculus cuckoos one encounters in Shanghai. On size one can often distinguish a well-viewed Lesser Cuckoo Cuculus poliocephalus, and if the eye is seen well one can distinguish the dark iris of Indian Cuckoo C. micropterus. Common Cuckoo C. canorus, Oriental Cuckoo C. optatus, and Himalayan Cuckoo C. saturatus are larger than C. poliocephalus, and unlike C. micropterus have yellow irides. C. optatus and C. saturatus are virtually indistinguishable, but this pair and C. canorus have some differences, among them the often unbarred yellow undertail coverts of C. optatus/saturatus and the thicker barring of those species on the breast and belly.

Common Cuckoo almost certainly breeds in Nanhui, and very soon we should be hearing its famous call. I have recorded neither C. optatus nor C. saturatus in the Shanghai region, I have witnessed C. micropterus in Shanghai, in the Tianmu Mountains, and at Dongtai in Jiangsu, and I have found C. poliocephalus at Dongtai.

In springtime, one encounters Cuculus adults, which if not calling are hard enough to ID; but just wait, come autumn we will be seeing the juveniles coming through. Juveniles never call, and the various Cuculus species in juvenile form resemble each other even more than Cuculus adults.

On Saturday, Elaine and I birded once again with Shanghai-based English birder Michael Grunwell. On Sunday, we birded briefly with Stephan Popp and Xueping Popp, and later Kai Pflug and his wife Jing dropped by.

Featured image: Black-faced Spoonbill in sub-adult plumage, Cape Nanhui. The spoonbills were taking advantage of the rainy weather, using pools just below the sea wall road. The road is busy when the weather is good but on rainy days is quiet. (Craig Brelsford)