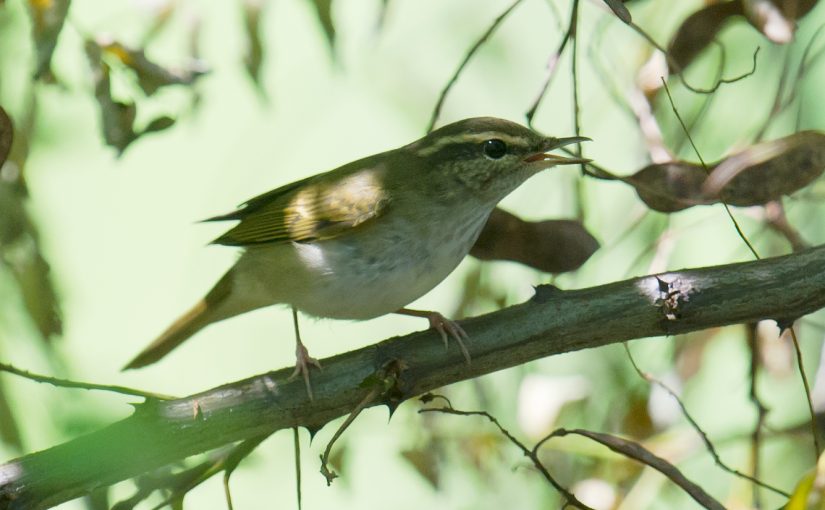 Editor’s note: In the photo above, a Pale-legged Leaf Warbler emits its characteristic “tink” call in Microforest 4, Cape Nanhui, Pudong, 27 Aug. 2017. The tink call of Pale-legged is appreciably higher-pitched than that of Sakhalin Leaf Warbler. Distinguishing the two calls is the subject of this post. — Craig Brelsford

If your ear is good, or even if your ear is just average and you have a sound-recorder, then you too can appreciate the higher frequency of the call of Pale-legged. A sound-recorder is important, because if you upload your recordings to databases such as eBird and the Macaulay Library, then you will be able to “see” the sound in the audio spectrogram.

Our first exhibit is the spectrogram of a call I sound-recorded of Sakhalin Leaf Warbler on 8 May 2016 in Cape Nanhui’s Microforest 4 (30.953225, 121.959083). The frequency is 4.8 kilohertz, a number that matches closely the frequency of Sakhalin calls on xeno-canto.org. 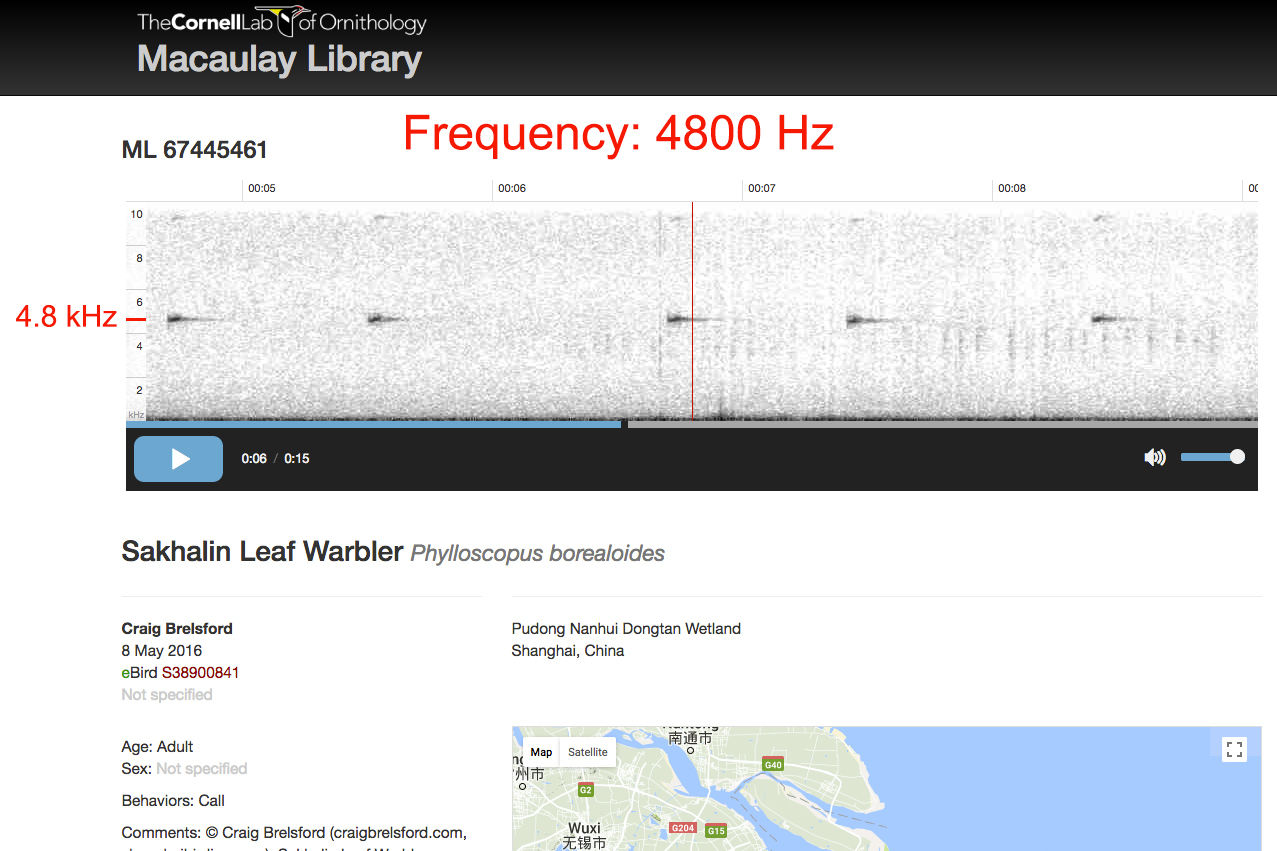 Here is the sound-recording: 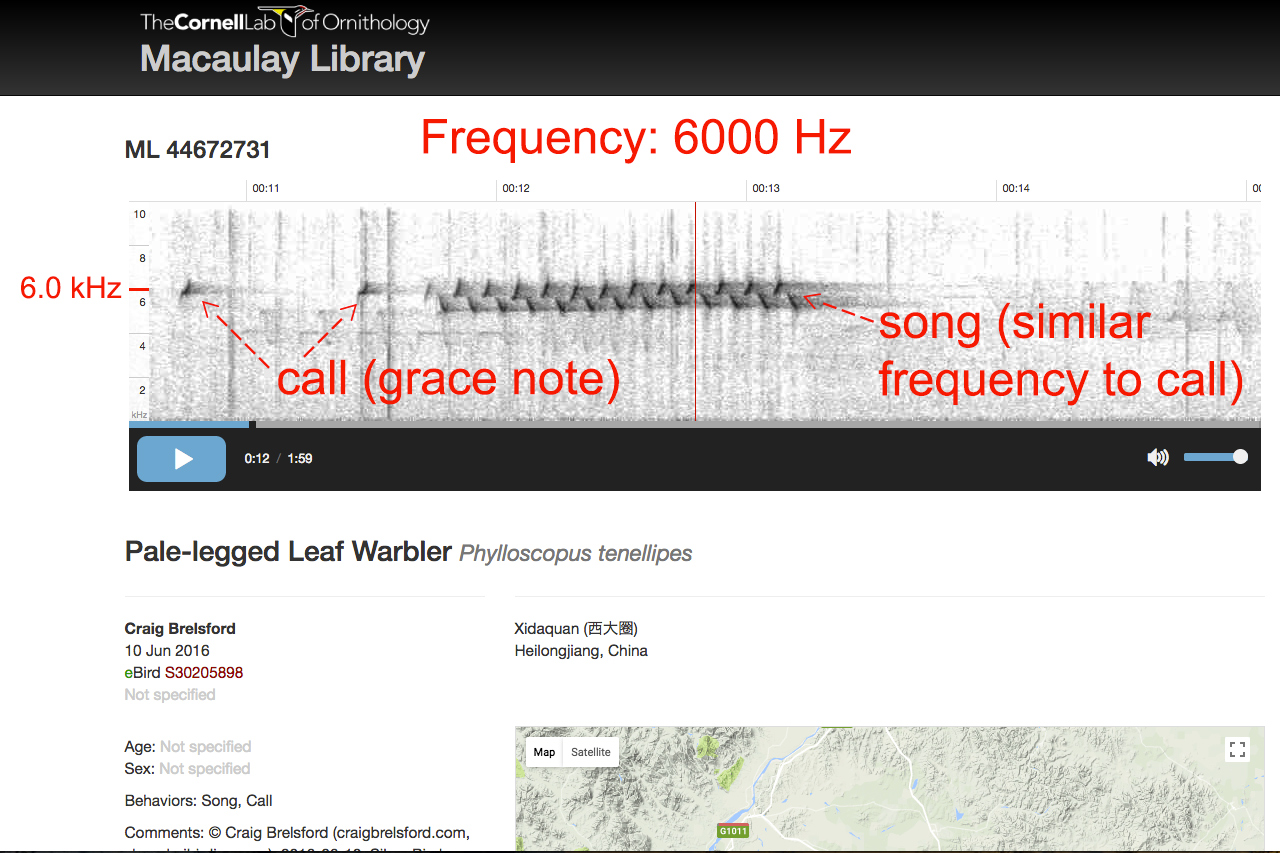 Here is the sound-recording:

The spectrogram below is of a brief sound-recording I made in Microforest 4 this past Sunday. The song element of this passage migrant is absent (though note that I have heard Pale-legged and Sakhalin singing in Shanghai in spring). The call has a frequency of 5.9 kHz and clearly belongs to Pale-legged Leaf Warbler. 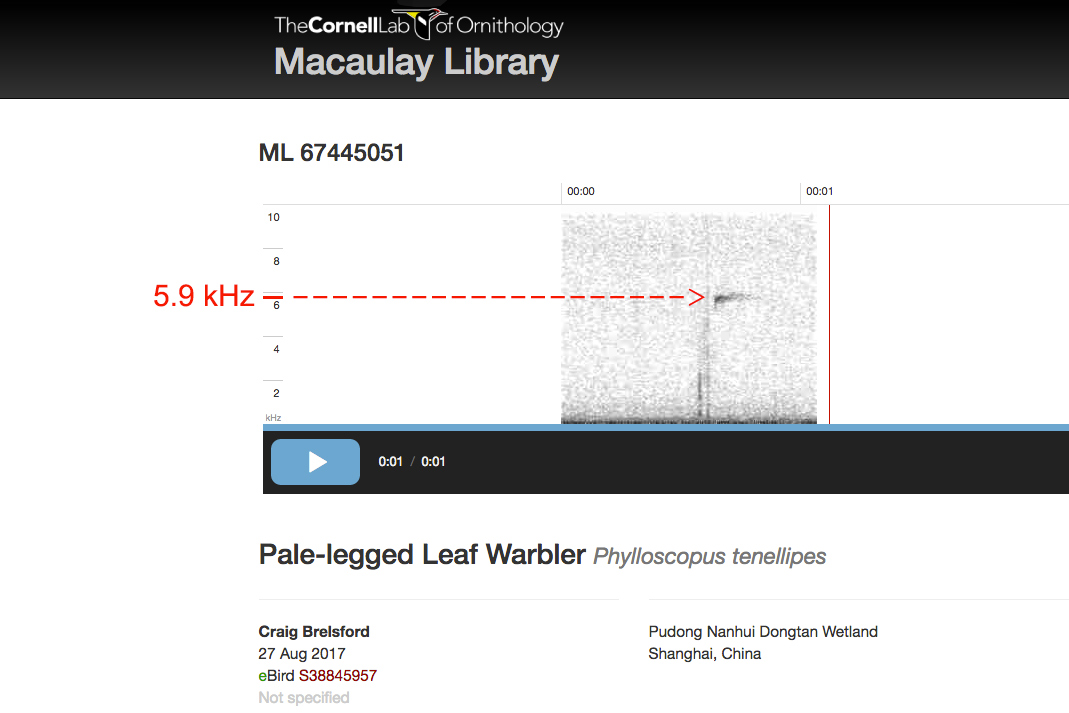 Why should you care about all this? Because prepared birders have a chance to get solid ticks of “Pale-Saks” that are merely calling and not necessarily singing. If you hear a Pale-Sak calling and trust your ear (or better yet, sound-record the call and later analyze the spectrogram), then you may be able to go beyond the safe, boring record of “Pale-legged/Sakhalin Leaf Warbler” to a more satisfying full tick.

Accurate, plentiful records from Shanghai will help researchers such as Round get a clearer picture of the movements and population of these understudied species. As Round et al. write: “Increased sampling of migrants may also resolve the differences in timing of passage between P. examinandus and P. borealis on the one hand, and P. borealoides and P. tenellipes on the other” (“Addition”; hyperlink mine).

What’s more, you do not need to spend much or even know much to record good audio. My Olympus DM-650 costs less than US$250. I have no microphone other than the one built into my pocket recorder, and I possess no parabola. I record in lossless 48kHz .wav. The very scientific-looking spectrograms displayed in this post are generated automatically by eBird and Macaulay.

In Shanghai and throughout China, important facts about common birds such as Pale-legged Leaf Warbler and Sakhalin Leaf Warbler remain unknown. This ornithological semi-wilderness is both difficult and exciting. If we rise to the challenge and become better birders, then we will make new discoveries and blaze a trail of knowledge for future birders to follow.