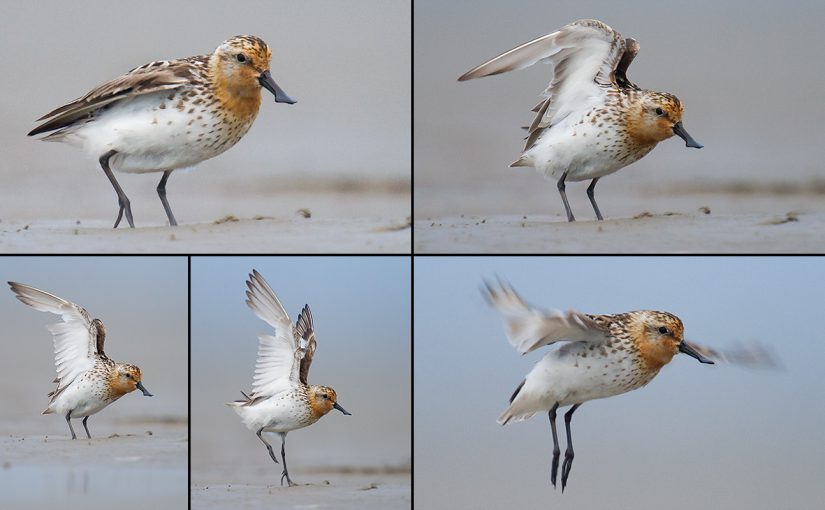 Editor’s note: The photos above record the moment when I first beheld Spoon-billed Sandpiper. The date was 23 Aug. 2011; the place was Yangkou, a major stopover point for Spoon-billed Sandpiper in Jiangsu; and the bird was this adult, still with a considerable amount of its rufous breeding plumage. Since then I have had numerous encounters with the critically endangered species. The most recent was 3 Nov., when I achieved one of my most sustained views (nearly 30 minutes) and first view in Shanghai of one of the rarest vertebrates on the planet. — Craig Brelsford

On 3 Nov. Elaine Du and I found Spoon-billed Sandpiper at Cape Nanhui, the coastal birding site in Pudong. A single SBS was associating with a flock of 2600 waders in mud near the entrance to the defunct nature reserve. The SBS site is 4.3 km north of the Holiday Inn, and its coordinates are 30.921616, 121.969776.

Seated, as is my wont, on the access road, my Swarovski ATX-95 spotting scope atop my tripod in front of me, I was scanning the flock of 2600 waders, looking for anomalies. The great majority (1920) of the birds were Dunlin, with Kentish Plover (620) the other major component.

I saw a bird that was one of a kind. It was not associating with Kentish Plover or Dunlin. Unlike the plovers and Dunlin, which were resting and preening, the bird I was viewing was feeding. It was moving quickly and covering much ground.

The constant movement, like a wind-up toy, reminded me of the Spoon-billed Sandpiper I have viewed at Yangkou and Dongtai. The speed at which the bird ran fit the pattern, as did the average length of sprint. The bird would occasionally take a short flight. When it flew, the bird showed the white sides to its uppertail coverts.

The foregoing did not prove Spoon-billed Sandpiper—other species such as Red-necked Stint share some of those characters. What I needed was a close view. Unfortunately, the galaxy of shorebirds was spread out between me and the Spoon-billed Sandpiper, and the SBS was obviously shying away. Finally the bird moved to within 150 meters of the road. Even through the heat haze, the scope brought home the trademark spatulate bill.

Second, as more and more of the Chinese coast is gobbled up by development, places such as the wetland at Nanhui, abandoned and gravely threatened as it is, take on greater and greater importance to migrating shorebirds. With so few places left for them, migrating waders pool in whatever hospitable area they can find. Small wonder, then, that in recent weeks the abandoned reserve has yielded Endangered Nordmann’s Greenshank and ultra-rarities such as Pomarine Jaeger and that the site is depended on by about 2 percent of the world’s Endangered Black-faced Spoonbill.

One thought on “Spoon-billed Sandpiper at Cape Nanhui”