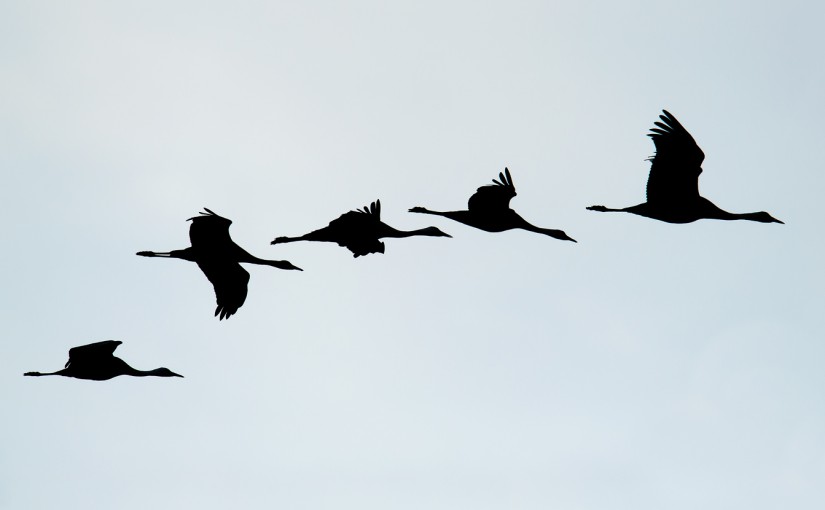 About a hundred Hooded Crane winter on Chongming, the great alluvial island at the mouth of the Yangtze. On the eastern tip of the island, Chongming Dongtan National Bird Sanctuary and Nature Reserve protects the cranes and dozens of other key species. Access to much of the reserve is barred to foreigners. The coastal hotspot in Shanghai offering much easier access is Cape Nanhui.

Eastern Chongming Island is made for car-birding. For best results, arrive early, before the guards. Drive along the dike (if accessible). If you cannot access the reserve, then drive on the farm roads just inside the dike. Use your spotting scope to note migrants and overwintering birds such as Common Crane accompanying the Hooded Crane and threatened species such as Swan Goose and Far Eastern Curlew.

Ducks are common, with several species of Anas and other genera such as Mergus (Common Merganser, very rarely Scaly-sided Merganser) and Tadorna (Ruddy Shelduck, rarely Common Shelduck). Look carefully in the beds below the dike for Reed Parrotbill. Among your Circus species will be Hen Harrier, Eastern Marsh Harrier, and the occasional Pied Harrier. In the reeds atop the dike and in the bushes popping up here and there, it’s possible to view birds arriving after a long migratory flight. Siberian Thrush and Arctic Warbler show up looking haggard and hungry.

The fields, ponds, marshes, and canals inside the dike are productive. Unlike the protected areas, the areas inside the dike are always accessible. When water in the ponds is low, waders arrive, with Black-faced Spoonbill always a valuable record and Temminck’s Stint sometimes seen. Look for migrating passerines such as Red-throated Pipit and taivana Eastern Yellow Wagtail. Look overhead for Peregrine Falcon.

Some years, fields lie fallow and thick grasses and scrub return, providing ideal habitat for flocks containing hundreds of Brambling. Look for several species of bunting, among them the beautiful Chestnut-eared Bunting, along with Pallas’s Reed Bunting. Just about any migrating passerine is likely to show up in the new thickets, among them Siberian Rubythroat and even scarce species such as Brown-eared Bulbul. Long-eared Owl has appeared around those fields, and I have seen Japanese Reed Bunting. Hooded Crane roost in the stubbly fields, and Chinese Grey Shrike and Black-winged Kite have had a sustained presence there.

The first wooded areas lie several hundred meters inland and so have little of the visible migration to show. Japanese Waxwing have appeared on berry-laden trees, and Eurasian Sparrowhawk have been known to birdwatch there. Among the many common wintering species are Pale Thrush and Dusky Thrush.

My teams usually birded four to six hours around Chongming Dongtan before heading to another site. We drove out from the city on the Shanghai Yangtze River Tunnel and Bridge. Sometimes we returned to the city, and sometimes we continued on to Jiangsu over the Chongming-Qidong Yangtze River Bridge.

Another alluvial island at the mouth of the Yangtze, Hengsha, used to offer a world of birding on its reclaimed eastern end. The reclaimed area is, presumably, closed, at least to foreigners; since the day in August 2017 when guards expelled me from the reclaimed area, I have noted few eBird checklists from Hengsha.

Return to “Birding Sites Around Shanghai”