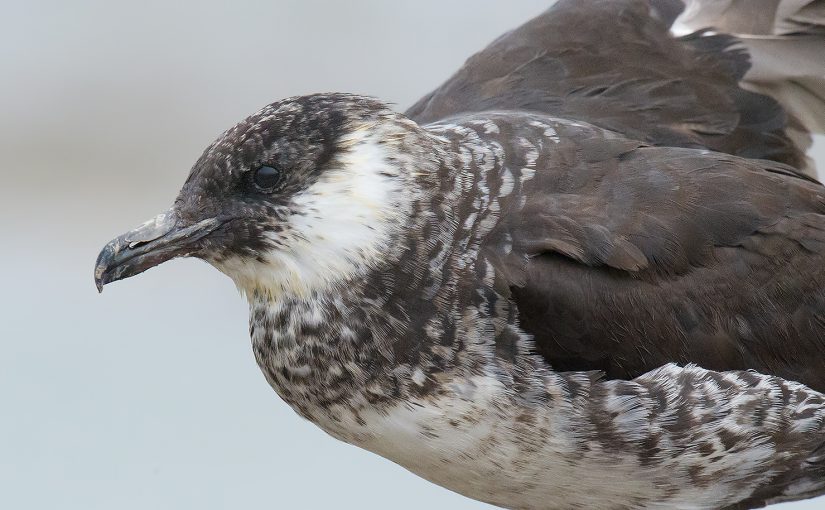 Found at Cape Nanhui on Wed. 19 Oct.: Pomarine Skua (called Pomarine Jaeger in North America). This first record for Shanghai was discovered by local birder Hé Xīn (何鑫) in the defunct nature reserve 1.4 km inland from the East China Sea. Kai Pflug was also on hand. Hé Xīn and Kai spread the news through our Shanghai Birding WeChat group, and the next day Elaine Du and I found the skua at the same spot (30.921625, 121.958940). The skua stayed four days, until Sat. 22 Oct.

The seabird appeared healthy, alternately feeding, preening, and roosting. Its plumage was shiny, and I saw no evidence of injury. It was a healthy refugee blown west by Typhoon Haima.

As sightings of skuas on the Chinese coast are rare, and because skuas have a bewildering array of plumages, at first there was some confusion about the species of our bird. It soon became clear that the vagrant was either Pomarine Skua Stercorarius pomarinus or Arctic Skua (IOC: Parasitic Jaeger) S. parasiticus. But which?

To answer that question, we needed photos, and so on Thurs. 20 Oct. Elaine and I drove to Cape Nanhui, the coastal birding site in Pudong.

We quickly found and photographed the bird. After examining our images, talking to other birders, and studying the books, we determined that it is a pale-morph adult pomarinus in non-breeding plumage. Here’s why:

— S. pomarinus is larger and bulkier than the other jaegers (small skuas), in particular the jaeger that it most resembles, S. parasiticus. The jaeger we found was large and bulky.

National Geographic describes pomarinus as a “bulky brute with a commanding presence [and a] thick bull-neck—a Rottweiler among the jaegers.” S. pomarinus, Geographic adds, “is the bulkiest [jaeger] and appears pot-bellied and very deep at the chest. … Often it appears there is more body before the wing than behind the wing.”

The image above is in line with that description. Below, another image illustrating the bulky shape and barrel chest.

Below, another close-up of the head. Note here and above that, unusually for pomarinus, the bill appears almost all-black.

There are several other ID points, some of them, such as tail streamers, not visible in The Shanghai Skua. The points discussed above, however, are enough, we think, to clinch the ID.

Enjoy these other photos of the rarity.

The skua was very tame and performed various functions in its unaccustomed surroundings. It scratched itself (below), bathed, scavenged dead fish, and occasionally took short flights.

Its most common activity was roosting on the mud bank.

Kai Pflug got the photo below of the skua with wings upraised. Note the unbarred underwing and pale flash at the base of the primaries, further evidence that the skua is an adult.

Hé Xīn (below) found The Shanghai Skua on Wed. 19 Oct., a historic first record for Shanghai. The next day I met Hé Xīn at the site.

Note: Nearly every major field guide covers skuas, a cosmopolitan family. This is a partial list showing the main works I consulted as I researched Stercorariidae.

Brelsford, Craig, moderator. Shanghai Birding, a WeChat chat group. News about the sighting of Pomarine Skua was disseminated by Hé Xīn and Kai Pflug through this chat group.

2 thoughts on “The Shanghai Skua”