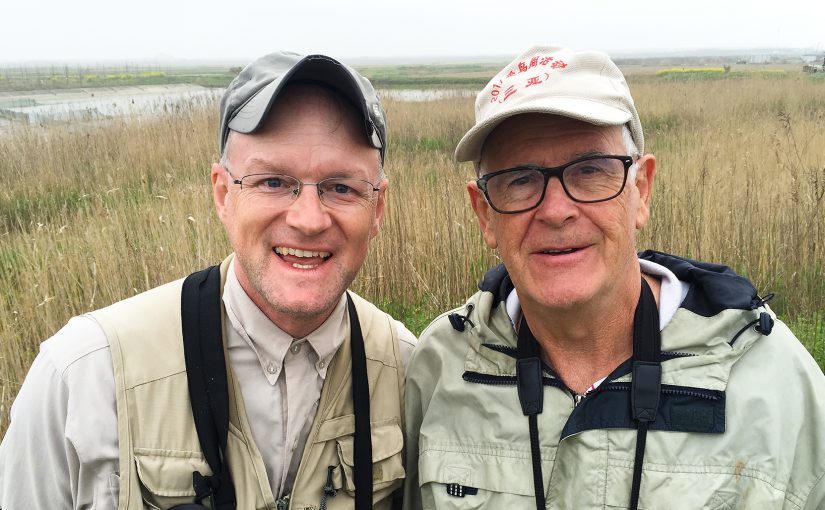 On Sat. 8 April I birded Cape Nanhui with John MacKinnon. John is co-author of A Field Guide to the Birds of China, the most influential book ever written about China’s birds. On John’s first visit to the tip of the Shanghai Peninsula, we noted 84 species. John and I were joined by veteran birders Michael Grunwell and Russell Boyman and the outstanding high-school birder Larry Chen.

We gave John the Grand Nanhui Tour, starting at Luchao to the south and ending 30 km north at Binhai. Heading back to the city, we made a brief stop at the sod farm just south of Pudong Airport, where we found a single Oriental Plover.

Nanhui yielded 23 Marsh Grassbird performing the song flight at three locations, and we saw 10 Endangered Great Knot and 1 Near Threatened Curlew Sandpiper. We had a pair of Rufous-faced Warbler and a Common Starling.

GETTING TO KNOW JOHN MACKINNON

Our partner, John MacKinnon, co-authored A Field Guide to the Birds of China. Published in 2000, the book has sold more than 50,000 copies and remains the only bird guide in English covering all China. John also wrote the first and second guest posts in the history of shanghaibirding.com.

John is witty and a fine storyteller. He had us roaring with tales drawn from his six decades as a researcher in Asia. The funniest story was about the doctor back home in Britain. Every time John straggled in, the doc would call in his students, so that they could study the strange new tropical disease John had contracted.

“I never cared about my health, because I never expected to live this long!” John said.

John also talked about his masterpiece, A Field Guide to the Birds of China.

It is difficult to overestimate the importance of the Field Guide. Had it merely been a window for Westerners to the birds of the world’s most populous country, then John’s work would have been important enough. The Field Guide, however, in translated form has introduced tens of thousands of Chinese to the birds of their own country. John’s Chinese name, Mǎjìngnéng (马敬能), is known by every birder in China.

John faced obstacles unknown to field-guide writers in North America and Western Europe, where birding has been practiced for 200 years. His sources were often thin, he said.

“For range maps, I had nearly nothing from Russia,” John said. “A Chinese book had ranges stopping at the Chinese border. Another book had no paintings, only descriptions.”

To critics who unfairly compare John’s Field Guide to field guides covering more developed parts of the world, John had this to say:

“You’ve got to finish something. We finished the book. We could have waited and said, ‘Oh, another species has been split, we must revise,’ but at a certain point you have to say, ‘We must go with what we’ve got.’”

To this day, no Westerner has repeated John’s feat.

John is a handy photographer and got off some good shots, three of which are displayed in the Day List at the bottom of this post. Here are some photos I took of the pioneer birder and naturalist.

MARSH GRASSBIRD ON THE BRINK

One of the areas where last year my partners and I noted Marsh Grassbird performing its song flight has been flattened. No song of Marsh Grassbird was heard there Saturday. A few Reed Parrotbill were calling in one of the strips of reeds left standing.

Much needs to be learned about Marsh Grassbird in Earth’s Largest City. Birders, look for the fluttering song flight, and listen for this song:

4 thoughts on “John MacKinnon in Shanghai”