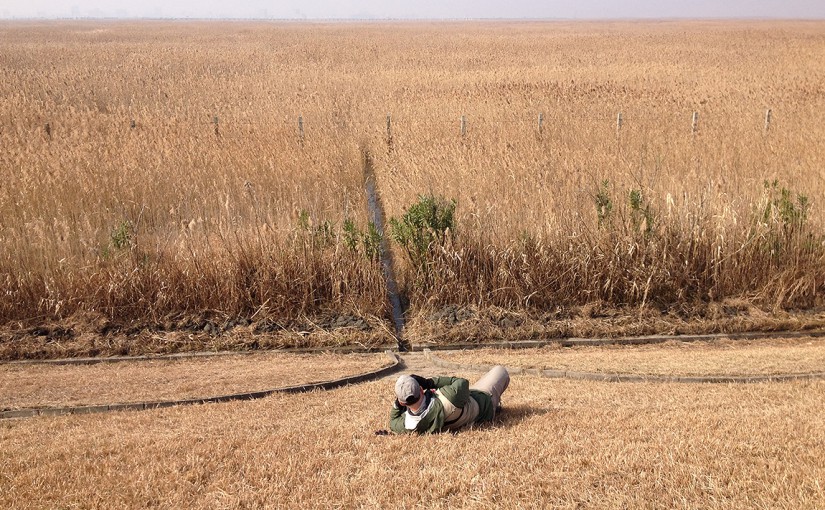 Elaine Du and I birded Cape Nanhui on foot, noting 43 species. I had my first-ever visual record of Brown-cheeked Rail in Shanghai, and at Dishui Lake we noted Common Goldeneye, 6 Greater Scaup, and 4 Black-necked Grebe. We had an unusual winter record of Eastern Yellow Wagtail (ssp. tschutschensis).

The Brown-cheeked Rail was at 30.907690, 121.972372. Our discovery of the shy species came about because we were walking, not driving. On a sunny and unusually quiet day along Shijitang Road (the sea-wall road), Elaine and I were walking slowly, noting every sound and movement. Had we been driving, we might have missed the brief, piercing call of the rail.

The sound was coming from the reeds at the landward base of the sea wall. As it was time for lunch, and knowing how long rail vigils can take, Elaine and I sat down and ate our sandwiches in the warm sun, watching for movement in the reeds below and recording the calls the rail was intermittently making. Finally, the rail appeared atop the thin drainage canal connecting the wall to the marsh. I got a good enough look at the brownish flanks to affirm that the bird was not the extralimital Water Rail Rallus aquaticus but Brown-cheeked Rail R. indicus.

The valuable record was icing on the cake for us, because Elaine’s and my main goal today was not to acquire lifers but to get outside and exercise. If good birds appeared, we said, then fine, but nothing was more important to us than casting away the cooped-up feeling we get living in our apartment in the center city. We wanted sunshine, broad horizons, and the relatively clean air of Cape Nanhui, and this time, for the first time, we wanted to bird Nanhui on foot.

We were able to do Nanhui without a car because of the recent opening of Metro Line 16, whose south terminus is at Dishui Lake. We needed only 90 minutes to go from our apartment near Zhongshan Park to Dishui Lake, taking Line 2 to Longyang Road and transferring to Line 16. After a quick taxi ride, by 08:15 we were at our favorite Dishui Lake viewpoint (30.908702, 121.945124). Having noted in addition to the aforementioned birds 350 Falcated Duck, 4 Tufted Duck, 1 of today’s 2 Richard’s Pipit, and surprisingly 0 Common Pochard, Elaine and I walked toward the coast. I had no camera with me, only my spotting scope and binoculars.

At the sea wall, we turned north, finding many Buff-bellied Pipit, White Wagtail, and the misplaced Eastern Yellow Wagtail. We ID’d our 2 Pied Harrier on the basis of the combination of brown back, greyish secondaries, and white rump of both birds, which were together. We heard two more rails but in even thicker cover than the first; we did not wait around for a visual to nail the ID, but we presume that they too were Brown-cheeked. Walking on an unpaved road into the reeds, we startled Common Snipe and Eurasian Teal. We watched Reed Parrotbill pry open the reed stems, making a crunchy sound.

One snipe, a loner, made only a quick, low flight before dropping stonelike and silently into the reeds. There was no “sneeze” at takeoff, unlike Common Snipe, and I saw no white trailing edge to the wing (which is not to say it was not there). The snipe appeared smaller than Common. Because of the angle of the snipe’s head as it dropped, I could not see the bill. Was it Jack Snipe? I do not know, but I urge local birders not to chalk up every snipe they see to Common but to take a good, hard look.

We u-turned and walked south, reaching the bus stop behind the Magic Parking Lot at the Holiday Inn. It was 15:20 and we had walked 17 km (10.6 mi.). We took the bus back to the Dishui Lake Metro Station. The subway ride back to Zhongshan Park was just as smooth as the ride out.