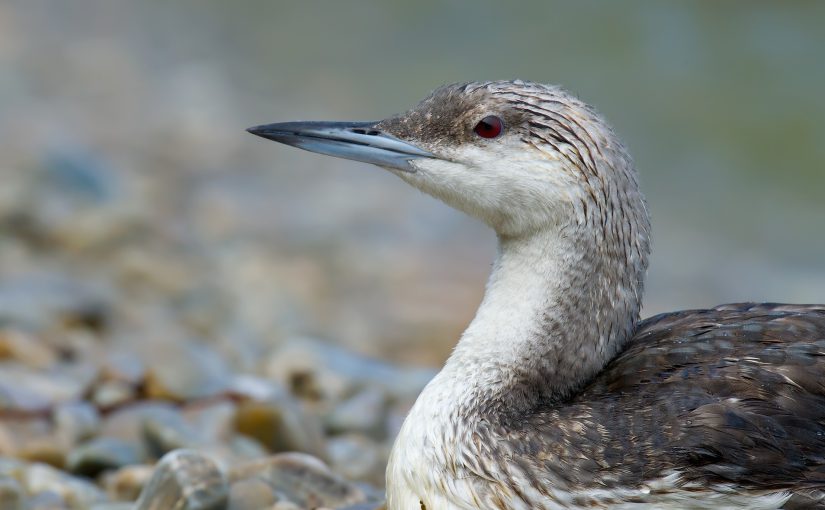 The loons had been sighted numerous times before my partner Michael Grunwell and I arrived on Sat. 18 March at Sanjiagang Seaside Park (31.217928, 121.768172). The dilapidated recreation area is on the coast of the East China Sea, near the mouth of the Yangtze River, 9 km north of Pudong Airport. Chinese birders discovered the loons, and birder Larry Chen, his partners Komatsu Yasuhiko and Archie Jiang, and bird photographer Kai Pflug followed up, reporting back to our chat group, Shanghai Birding.

On Sun. 19 March, the Red-throated Loon was discovered dead at the park by local birder Suōyǔ Hè (蓑羽鹤). It is not clear what killed the bird, but it may have slowly poisoned itself by ingesting oil that had collected on its feathers. Larry said that during his encounters with the individual “The loon was constantly attempting to preen itself” and that he clearly saw oil on one of its flanks. Can you detect anything amiss in the video below?

Red-throated Loon breeds at latitudes above 50 degrees in Eurasia and North America. Wintering Gavia stellata is more common in Shanghai than Black-throated Loon, being recorded annually here. Michael, my wife Elaine Du, and I found Red-throated Loon at Cape Nanhui in January 2016.

Black-throated Loon is also known as Black-throated Diver and Arctic Loon. Gavia arctica breeds across northern Eurasia and into Alaska. It is an uncommon winter visitor all along the coast of China and is very rarely noted in Shanghai, with the last previous record in 2012. Before the encounter Saturday, I had seen Black-throated Loon only once, in September at Laotieshan in the northeastern province of Liaoning.

Here is video of Black-throated Loon at Sanjiagang Seaside Park.

GULLING WITH BIRDERS IN MY POCKET

With my iPhone I took photos of the gull through my scope and uploaded the photos to Shanghai Birding, the chat group I manage on the instant-messaging application WeChat. Within minutes the experts in my pocket started weighing in. Shenzhen birder Jonathan Martinez and Larry Chen, both strong gullers, confirmed Michael’s ID. Michael and I had a life bird!

Slaty-backed Gull Larus schistisagus breeds on islands and cliffs on the coast of the Russian Far East (particularly the Kamchatka Peninsula) as well as Hokkaido. Wintering Slaty-backed are common in Japan, less common in northern coastal China, and rare in Shanghai.

JOIN US ON SHANGHAI BIRDING

You too can join Shanghai Birding. In WeChat, search in New Friends for “craigbrelsford.” I’ll accept your friend request and add you to the group.

Also, don’t forget to subscribe to this Web site. Write us at info@shanghaibirding.com and ask to become a subscriber. I’ll notify you every time I post, and you can opt out at any time.

With these two absolutely free resources, you will have the equivalent of a daily newspaper (Shanghai Birding) and weekly news-magazine (shanghaibirding.com) dedicated to birding in the great city of Shanghai.

5 thoughts on “Loons Near Pudong Airport”