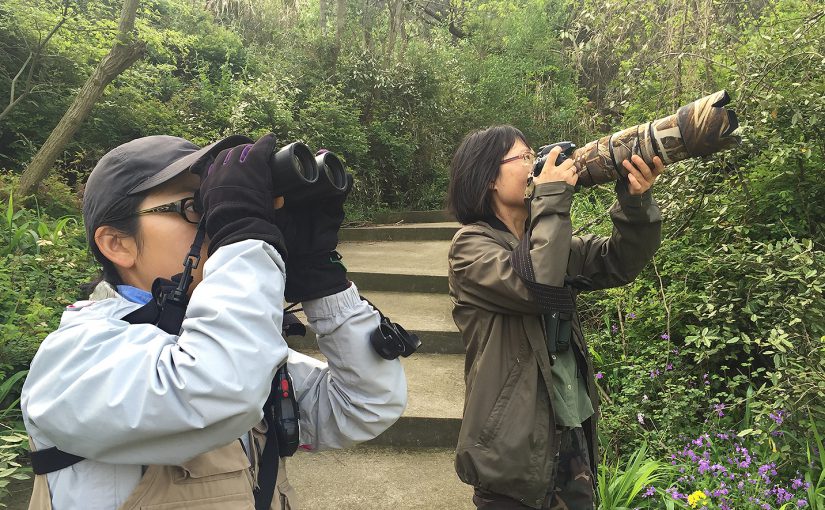 From Thurs. 14 April to Tues. 19 April 2016, Elaine and I combined inner-city birding (Century Park, Shanghai Botanical Garden) with suburban-coastal birding (Nanhui, Lesser Yangshan). We noted 102 species. Sun. 17 April was the big day, with 95 species noted. Among them were 2 Chinese Egret and 3 singing Pale-legged Leaf Warbler on Lesser Yangshan and Rufous-faced Warbler, Swinhoe’s Minivet, and near-threatened Curlew Sandpiper at Nanhui. Among our many firsts-of-season were 10 Narcissus Flycatcher, 4 Eastern Crowned Warbler, 2 members of the Arctic Warbler Complex, and Yellow-browed Bunting. With the spring migration rolling on strong, even the city parks gave us seasonal firsts, with Eurasian Woodcock and Blue-and-white Flycatcher at Century on Thursday and Eyebrowed Thrush Tuesday at the Botanical Garden. During the 6-day period, we noted 0 raptors, whether Accipitriform, Strigiform, or Falconiform.

When silent, as is most often the case in Shanghai even in spring, Pale-legged Leaf Warbler and Sakhalin Leaf Warbler are indistinguishable, and a typical bird list this time of year includes the entry “Pale-legged/Sakhalin Leaf Warbler Phylloscopus tenellipes/borealoides.” The songs of these lookalikes are, however, distinct, and on Sunday in the wooded areas of Garbage Dump Valley on Lesser Yangshan we heard the cricket-like song of P. tenellipes. I made a recording (00:22; 1.7 MB):

For the first time we noted Marsh Grassbird north of the Magic Parking Lot/Holiday Inn at Nanhui. This new location is on the road leading into the reed bed and lined with street lamps. Another, larger location is 30.866006, 121.939614, a point 2.8 km S of the lock at Nanhui and 4.1 km S of the Magic Parking Lot/Holiday Inn. We discovered Helopsaltes pryeri at the southern location on 10 April and found them there again Sunday. 3 Reed Parrotbill were in the area, and Pallas’s Reed Bunting, so numerous just a few weeks ago, were nearly absent, most of them having departed for breeding areas north.

Sunday marked the reunion of the five-member Dream Team after a winter hiatus. Husband-wife members Stephan and Xueping Popp took many fine shots, and Stephan once again performed skillfully behind the wheel. Senior Birder Michael Grunwell combined sober experience with boyish enthusiasm, the latter particularly in evidence when he beheld Narcissus Flycatcher, a lifer for him. Elaine Du did her usual fine job keeping the list. Though I’m making a quick recovery from my intercostal muscle strain suffered 10 April, still I traveled light, eschewing photography and using only binoculars.