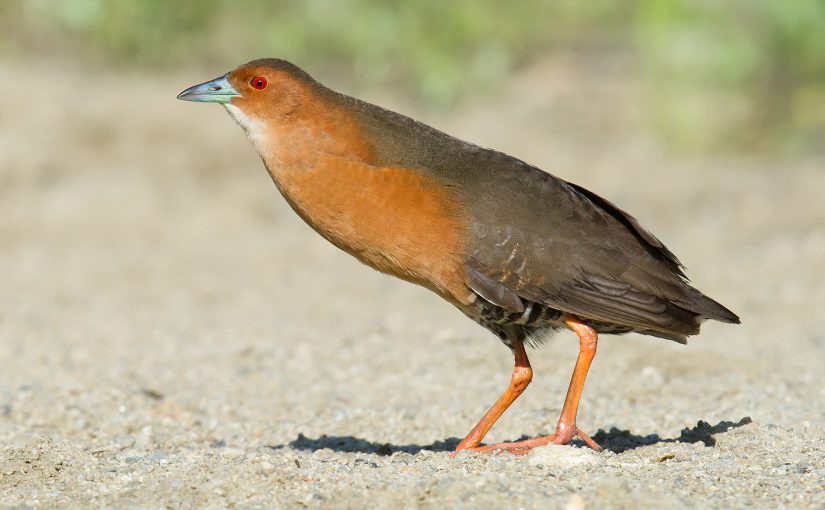 My wife and partner Elaine Du and I flew from Hongqiao Airport in Shanghai to Jiamusi, Heilongjiang. We drove to Elaine’s home village of Dawucun (Dàwǔcūn [大五村], 45.732679, 130.589612) in Boli County. Elaine’s parents’ home became our base of operations for the next 17 days.

Elaine and I birded the northern temperate forest preserved in Xidaquan National Forest (Xīdàquān Guójiā Sēnlín Gōngyuán [西大圈国家森林公园], 45.727751, 130.317316). We saw in a completely new way birds we know from Shanghai. For the first time I heard singing Blue-and-white Flycatcher, Pale Thrush, and Rufous Hawk-Cuckoo. The latter is rarely seen on migration in Shanghai. The former two are well-known to Shanghai birders.

The basic facts about Boli County are two. First, the area is rich in birds. Second, no one birds here.

We are in the heart of the breeding range of Eastern Crowned Warbler (20 today). Most birders “down south” know Eastern Crowned Warbler well but have never heard it sing; today, its song resounded through the forest. Radde’s Warbler (24 today) is another species common here. Mandarin Duck (20) breed in the forest-ringed lakes and ponds around Boli. We also had singing Pale-legged Leaf Warbler.

We spotted a family of Eurasian Eagle-Owl at a quarry near Jiulong Reservoir just outside Boli. A parent was standing guard with two owlets. Elaine scoped them herself with our Swarovski ATX-95.

Elaine and I started birding at 03:40, 9 minutes after sunrise. Singing Daurian Redstart was Bird 1 of our list, which grew to 53 species.

By 09:30, we had already spent several hours at Xidaquan National Forest and were at the end of our tether. We parked on the forest road and napped. While sleeping I heard a sound I vaguely remembered—or was I dreaming? No, I was hearing Gray’s Grasshopper Warbler. I first heard this extreme skulker last July with Elaine and Jan-Erik Nilsén in Hulunbeier, Inner Mongolia.

Also on that road we had male Yellow-rumped Flycatcher and found Mandarin Duck in a pond deep in the forest.

We had a Siberian trifecta today with Siberian Thrush, Siberian Blue Robin, and Siberian Rubythroat, all singing. We once again found Rufous Hawk-Cuckoo as well as Indian Cuckoo, Common Cuckoo, and Oriental Cuckoo. We found Black-browed Reed Warbler in a brushy area far from reeds; the bushes also contained Thick-billed Warbler. Above the scene soared Crested Honey Buzzard.

We are deep in the heart of the Chinese Palearctic. In places, the lush greenery in the northern temperate forest here is as thick and impenetrable as that found in Yunnan’s near-tropical Dulong Gorge, which Elaine and I visited earlier this year. I almost expect to make out a wren-babbler in the gloomy undergrowth, but there are no wren-babblers, no laughingthrushes, and no fulvettas in the Palearctic heartland. Here, the robins and bush warblers are the undergrowth specialists.

We once again found the family of Eurasian Eagle-Owl. Owlets were feeding. A parent was looking on. All seemed well. We scoped them from the other side of the valley; the owls are at the rim of a cliff made by a massive quarry.

Today around Xidaquan National Forest Elaine and I found yet more Shanghai passage migrants on their breeding grounds. The most I had ever heard from White-throated Rock Thrush and Yellow-rumped Flycatcher was a click or tseep; today, I recorded them in full-throated song. And what songs! White-throated’s was especially moving, melodic and slow. Recording conditions were perfect—a still, quiet morning before the rain.

We found 6 Gray’s Grasshopper Warbler and got best-ever views of this shyest of species. We recorded yet more songs and calls of Eastern Crowned Warbler, a species with a surprisingly rich musical repertoire.

Peering through the undergrowth, Elaine found a Siberian Blue Robin singing, its tiny perch a small stage for a one-bird play. Siberian’s song is a soliloquy, a series of statements punctuated by long pauses.

Elaine and I rested at home on a rainy day. In the afternoon the rain let up and we walked into the fields, still barren. We were with Elaine’s niece Lisa Li. We showed Lisa 4 Little Ringed Plover, and I sound-recorded 2 Meadow Bunting.

If you want to hear White’s Thrush, Grey-backed Thrush, and Pale Thrush, then come to places such as Boli County, Elaine’s hometown in eastern Heilongjiang. If you want to see these species, then you will have a better chance in Shanghai, where all three spend the winter, and where they are commonly seen in inner-city parks. Today’s dawn chorus (at the wee hour of 03:00) featured spirited performances by all three of these species, plus Siberian Thrush. Their performances however were given mostly offstage. White’s never appeared at all, but its mournful one-note whistle was heard everywhere until about an hour after sunrise. Pale Thrush and Grey-backed Thrush sing powerfully but well back from the road, deep in the thickly vegetated and currently tick-infested forest. Siberian Thrush was atop his accustomed high tree near the entrance to Xidaquan National Forest.

This morning an 01:45 wakeup call got us calling Grey Nightjar, yet another Shanghai-area passage migrant we have rediscovered here. Standing at the glorious Silver Birch Grove (白桦林) at Xidaquan National Forest, Elaine and I spotted movement in the crown. It was White’s Thrush, hopping to the top to sing. In amazement we watched this normally secretive, nay invisible, species sing a two-note song. The first, lower note was apparently hummed through its closed or barely open mouth, while for the high note the thrush gaped wide. In Shanghai, I have seen White’s countless times and heard it sing exactly once, in Century Park this past April. Here in eastern Heilongjiang, the situation is reversed, with the early-morning song being heard throughout the forest, and views very difficult to get.

Another big highlight today occurred when I was alone in the vast forest. By sheer luck I happened to stop just below the well-concealed nest of Northern Goshawk. I had heard the bird calling distantly and hit “record,” just in case. The forest Accipitriform swooped in, crying as it arrived. Elaine, meanwhile, 3 km (2 mi.) away with the car, witnessed Rufous Hawk-Cuckoo being chased away by Large-billed Crow.

Other highlights were a high count of 21 singing Siberian Blue Robin, a forlorn-looking tytleri Barn Swallow resting all alone in the dusty parking lot of the visitors’ area, and the rediscovery at another quarry of the local family of Eurasian Eagle-Owl.

Rain cut short our day, but not before an early start bought us a ticket to the dawn chorus. What a show it was.

For the second straight day we birded the hills south of Elaine’s home village. An Eastern Buzzard caught a snake, and we stumbled on nesting Yellow-throated Bunting.

On a rainy day we rested and visited family.

Driving south rather than southwest (toward Xidaquan), Elaine and I entered hills reaching elevations of 450 m (1,480 ft.). We made an eight-minute sound-recording of Grey-backed Thrush and did photo and voice studies of Willow Tit (local ssp. baicalensis) and Coal Tit (ater). The latter is the same small-crested nominate ssp. known to birders in Continental Europe. Another taxon here in Heilongjiang and known to European birders is the snowball-headed Long-tailed Tit (caudatus), also noted today.

We continued driving south, leaving Boli County and Qitaihe Prefecture and briefly entering Linkou County, Mudanjiang Prefecture. Here we were dismayed, despite the beautiful agricultural scenery. Nearly every square inch of the land is taken up either by farming or forestry (conifer plantations). We turned back and found more good habitat on a forest road in the Hongwei Linchang area (45.638703, 130.547478). There, we found singing White-throated Rock Thrush.

Found today near Boli: incredible Band-bellied Crake. A near-threatened species, Zapornia paykullii breeds in the Russian Far East, where it apparently is still locally common, and in Northeast China, where it is almost surely declining. It winters south to Indonesia.

This graceful and little-known rail is far and away Elaine’s and my Bird of the Heilongjiang Trip and a life bird for both of us.

Elaine and I scouted out new birding sites yesterday, and Band-bellied Crake was the payoff today. The crake called spontaneously at 06:00 as Elaine and I were breakfasting near the stream at 45.638703, 130.547478. Elaine and I searched upstream and downstream for hours, finding no other crakes. We returned to the breakfast spot at 10:10 and found our crake again. Was he really the only one?

Fortunately for us, Elaine happens to be from one of the best areas left for forest birding in this part of Heilongjiang. The place where we found the crake is an area of poor to good habitat 15 km (9 mi.) south of Elaine’s home village. Xidaquan, the large forest reserve with much good to excellent habitat, is 21 km (13 mi.) away.

Today Elaine and I checked on our Band-bellied Crake and obtained even better sound-recordings of the rare rail. Another careful search of the creek bottom failed to turn up any more crakes. We continued exploring the area around Hongwei Linchang. We found some areas that if left untouched in a generation or two may be healthy forests again, but we have yet to find a single place on par with Xidaquan National Forest, our core research area. Today we added Lesser Spotted Woodpecker and Olive-backed Pipit to our trip list.

We made our final trip to Xidaquan. Rain kept us in the car for three hours. We birded the forest then drove to Jiulong Reservoir, where we added to our trip list White-throated Needletail.

We awoke at Elaine’s parents’ house, said goodbye to the family, drove to Jiamusi, and flew back to Shanghai.

Boli: name that may refer to either Boli County or Boli Town.

“Birding Boli, Heilongjiang in May & June” is a two-part report. This is Part 2.