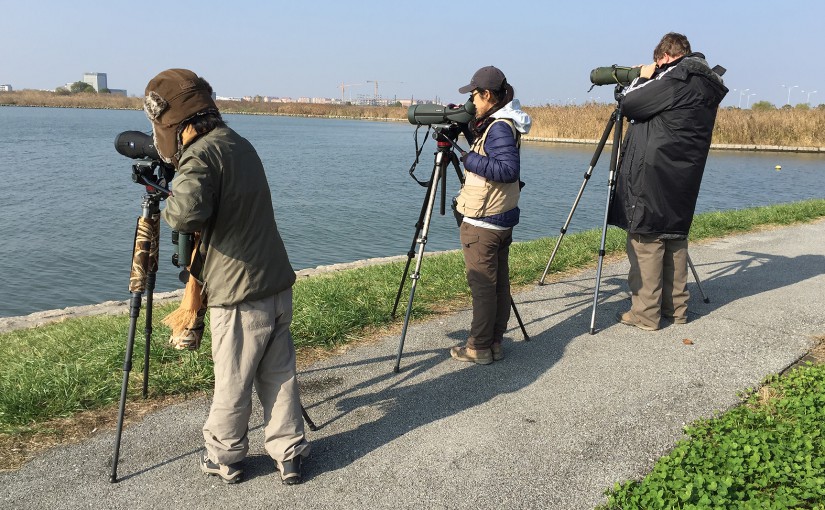 On Saturday 12 Dec., birding once again with the Dream Team, Elaine and I noted 69 species at Lesser Yangshan and Nanhui. We found Horned Grebe, Black-necked Grebe, and Greater Scaup at Dishui Lake, we noted 600 Common Shelduck off the coast at Nanhui, and we added Tundra Swan, Red-breasted Merganser, Common Goldeneye, Brown-eared Bulbul, and White-rumped Munia to our Shanghai-area autumn-winter list.

Lesser Yangshan has been thin lately, but it was with past December views of Brown-eared Bulbul in mind that we made the 25-km trek across the Donghai Bridge to the little island. Sure enough, we quickly found a single Brown-eared Bulbul, a scarce winter visitor in the Shanghai area. The bird was in Garbage Dump Gully and was flying excitedly from tree to tree. We guessed it had just arrived. Michael was pleased with his lifer. In the trees in the courtyard we found a pair of Japanese White-eye.

Finding little else of interest, we left Lesser Yangshan after less than an hour. Our first stop at Nanhui was an overgrown field near Dishui Lake. Here we found a strong mix of buntings, among them Rustic Bunting and Yellow-browed Bunting.

At Dishui Lake, the first bird I laid eyes on through the scope was the Red-breasted Merganser. Xueping snapped up record shots of the distant duck. The straight bill of our Red-breasted distinguishes it from the hooked bill of Common Merganser. Tufted Duck were the most numerous diving duck, and Falcated Duck the most numerous dabbler. The Horned Grebe, also known as Slavonian Grebe, was in the same northeastern corner of Dishui where Elaine and I found 3 Horned Grebe six days ago.

A quick stop at the Magic Parking Lot once again revealed late Barn Swallow. Absent from Dishui Lake, they were present in their dozens over the smaller pond behind the Holiday Inn. For the past three weeks, we have noted Barn Swallow there and nowhere else. A Peregrine Falcon soared over the carpark.

The problem with the sea-wall road at Nanhui is that another wall runs along the road, blocking one’s view of the mudflats below. Barred thereby from scanning as one drives, one is forced to make periodic stops and get out of the car. During one of these stops, we found the impressive flock of Common Shelduck. A much luckier view was that of the Common Goldeneye. A random stop produced a single white spot in the muddy sea far out. The scope brought him in just before he took another long dive.

At Nanhui we ran into Hé Xīn (何鑫). He alerted us to the presence of Tundra Swan, and he told us he had seen an Oriental Stork. He also found Swan Goose. We were able to locate the Tundra Swan but missed the stork and Swan Goose.

With the new additions, Elaine’s and my Shanghai autumn-winter list now contains 260 species. We started the list on 11 Sept. 2015.