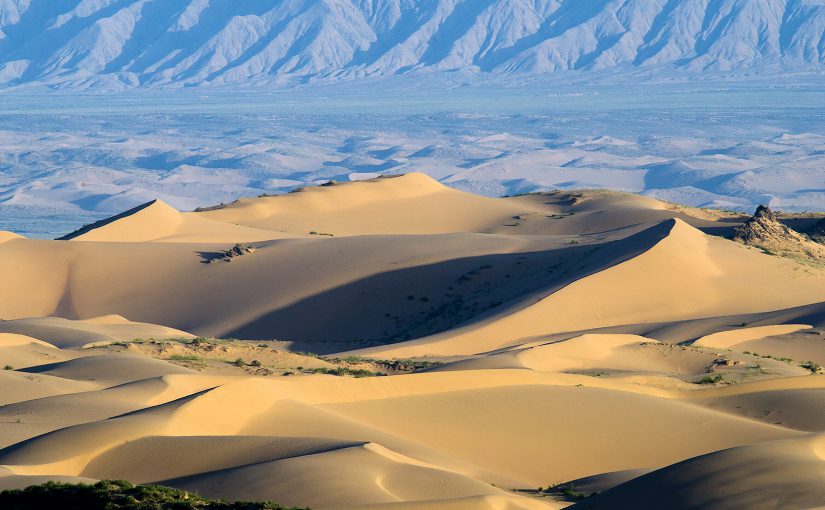 This post covers the eighth and final week of our two-month birding expedition in Qinghai. The featured image above shows dunes and mountain in the remote backcountry of Wulan County, where we spent most of Week 8.

The eighth week lasted from from Sun. 14 Aug. to Sun. 21 Aug. My wife and partner Elaine Du and I spent most of Week 8 in Wulan County, Haixi Prefecture. Amid stunning scenery, we found Tibetan Wolf, discovered a new location for Przevalski’s Partridge, and around Lake Xiligou had a rare eastern record of Water Rail as well as Qinghai favorites Black-necked Crane, Tibetan Lark, and Henderson’s Ground Jay. The lake held Black-necked Grebe and a noisy super-flock of 4610 Ruddy Shelduck, and Mongolian Goitered Gazelle were in the hills behind. Near Chaka we had Mute Swan, and at a site south of Gonghe-Qiabuqia we noted Dusky Warbler, the 195th and final species of our two-month trip.

Elaine and I had spent 15 straight nights in our tent when in the afternoon of Sun. 14 Aug. we pulled into Wūlán Xiàn Hóngxiáng Jiǔdiàn (乌兰县鸿翔酒店, 36.927295, 98.479888). This comfortable hotel in Wulan would shelter us for the next three nights. We did no more birding on the 14th. The next day, the 15th, a group of Elaine’s former co-workers who happened to be vacationing in the area stopped by our hotel for a big lunch. As in Xining in July, our vacation-within-a-vacation gave us the breather we needed.

THE BACKCOUNTRY OF WULAN COUNTY

On Wed. 17 Aug. Elaine and I were back on the road, exploring the area south of Wulan and north of Dulan (36.299080, 98.091569). Here Elaine and I found some of the best scenery and most remote country of our entire two-month Qinghai trip. We drove for hours, not passing a single car. We saw more Przevalski’s Partridge than people, the result of our finding a new site (36.826334, 97.965649) for the species 66 km (41 mi.) southwest of Wulan. The covey contained 13 birds. The site, at elev. 3380 m (11,090 ft.) and with well-vegetated hillsides and steep cliffs for roosting nearby, meets the basic demands of the species and may hold the partridges throughout the year.

I drove into a sand dune and got stuck. With our handy shovel I dug the car out. I learned two lessons from the incident. First, sand is treacherous; never approach it flippantly. Second, always have tools in your car, especially in remote places. Without that shovel, I would not have been able to dig the car out. I would have been at the mercy of some local—assuming we had found someone. We were able to continue birding after a short delay.

Birding the Backcountry: Wulan County, Qinghai (you are here)