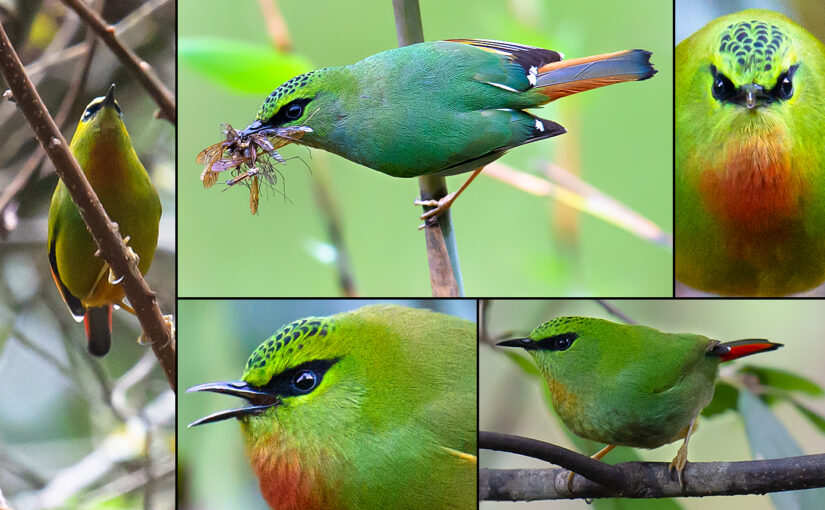 Pianmazhen (26.012901, 98.625166) is a site of historic importance. The village lies on the border with Myanmar (Burma) about an hour’s drive from Lushui, the seat of Nujiang Prefecture in northwest Yunnan. It looked to be a worthy birding target, so this past April, I gave it a try.

I was fortunate to find an ex-soldier taxi driver up for the adventure. The road is signposted, and some 10 km (6 mi.) outside Lushui it branches off the main Lushui–Gongshan highway. It winds through cultivated hillsides and reaches a ridge at Shuangmidi (26.898752, 99.107914).

The next few kilometres pass through beautiful woodland, where I recorded Black-hooded Oriole, Chinese Babax, Yellow-bellied Fantail, and many Common Cuckoo. The road climbs higher through pine forest and tops out at Pianma Fengxue Yakou (25.972807, 98.683530), elev. 3000 m (9,840 ft.), a wild mountain pass with clouds continuously blowing through from Myanmar.

Feeding on red rhododendron flowers were Mrs. Gould’s Sunbird, White-collared Yuhina—and to my great pleasure, looping in and out of the bushes, several Fire-tailed Myzornis.

This spot, just 2 km or 1.2 mi. from Myanmar, is home to a big police post. Thinking that in such a lonely place the police might like a chat, I walked over to say hello. Big mistake. They made it clear I should return forthwith, although they made no attempt to enforce their order.

The forest on this side of the Nujiang is much wetter and quite different from that on the opposite bank at equal latitude (Miaoganshan area, another worthy target without serious checkpoints).

The whole region is a paradise for the fit birder.