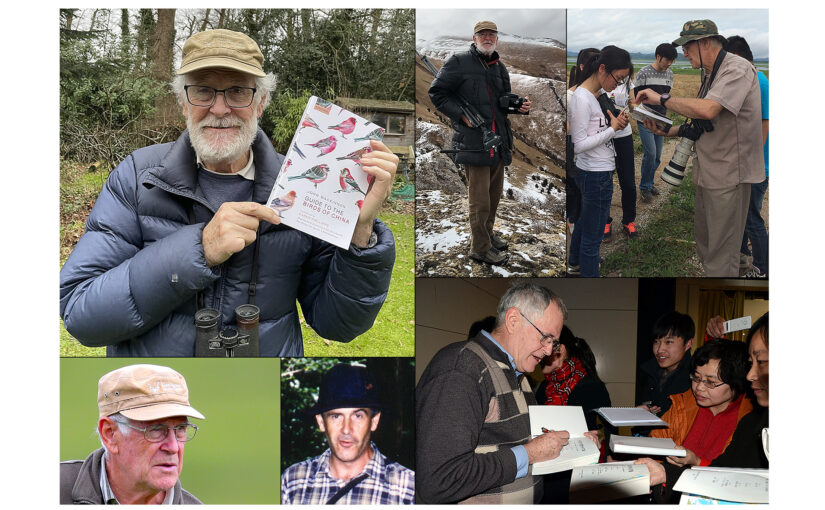 Craig Brelsford: Many thanks, John, for this exclusive email interview with shanghaibirding.com. Before we begin, please let me inject a personal note. You have been an inspiration to me for many years. Your Field Guide to the Birds of China was the first book about birding in China that I ever bought, and it laid the foundation for all my subsequent work, which includes this website. To this birder, and to thousands of birders foreign and Chinese, no book displayed better the avifauna of China in all its complexity and grandeur. Now, more than 20 years after the Field Guide was published, you have published its long-awaited successor: the Guide to the Birds of China. The Guide cements further your status as one of the most consequential ornithologists ever to have worked in China. For birders who may not know you yet, who is John MacKinnon?

John MacKinnon: I am a longtime biodiversity expert who has been working in Asia since the 1960s. I progressed from pioneer studies of orangutans in Borneo and Sumatra to being the WWF representative in Indonesia to opening up conservation in post-war Vietnam and Indochina and eventually reaching China in 1986 to lead the Giant Panda project for WWF. Birds were always a love of my work and I have produced quite a few bird books and booklets along the way. I am a general naturalist so have also produced books on butterflies and mammals and had the excitement of describing three new large mammals for Vietnam—Saola, Giant Muntjac, and Annam Muntjac. I am a co-author of the Guide to the Mammals of China, published by Princeton University Press.

Brelsford: Your Field Guide to the Birds of China, published in 2000, was a landmark in the history of birding. Never before had anyone attempted to cover to the deep and detailed extent that you and your co-author, Karen Phillipps, covered the nearly 1,500 species of bird in China. You began your research in the 1990s, before the Internet existed and when China had only recently opened up to the world. What motivated you to take on such an ambitious project?

MacKinnon: I had already published with Karen the popular Field Guide to the Birds of Borneo, Sumatra, Java and Bali for Oxford University Press (OUP). Karen was born in Borneo, and I had spent seven years in that region, so we were both very familiar with its birds. OUP asked if we could do a similar book for China, since Karen was by that time living in Hong Kong and had produced a book with Clive Viney, Birds of Hong Kong and South China, and I was by that time working in China for WWF on the early Giant Panda project. It was indeed a challenge, but there was such an obvious need for a better field guide for China that we agreed to give it a try.

Brelsford: Your new Guide is the successor to the Field Guide, but, one notes, not its second edition. Why did you handle the project that way? In what ways does the Guide differ from the Field Guide?

MacKinnon: I wanted to emphasize that this is not just an updated version of the Field Guide. Apart from adding new species, revising the taxonomy, revising all maps, and adding new plates and new features such as QR codes to hear typical calls, the book has a different name and different authorship.

Brelsford: English-speaking birders may be unaware of the influence the Field Guide has had on Chinese birders. Your Chinese name, Mǎjìngnéng (马敬能), is known by every birder in China. Relate to us your plans for reaching Chinese birders with the new Guide.

MacKinnon: The original Field Guide was initiated for English-language users by OUP and was only later translated and published in Chinese. The Chinese version sold more than 10 times as many copies as the English version! The new Guide was prepared primarily for the large following of Chinese birders who have been pressing me for years to do an update. I offered the English publication rights to OUP only after signing up and finishing the text and plates for the Chinese publisher. In addition to a version in simplified Chinese, the Chinese publisher is planning a version in complex Chinese characters for use in Taiwan.

Brelsford: Incorporating the many taxonomic changes that have occurred in the past two decades has been one of the motivations for the new Guide. What is your opinion on modern taxonomy, in particular the trend to split species?

MacKinnon: I do not like the trend to split and split. It makes it less easy to get into birding and more frustrating in that it is more difficult to put the right name on a bird. Also many of the new names are ugly and difficult to remember. But as a taxonomist once explained to me, “You do not make your name as a taxonomist by leaving the names unchanged!”

Brelsford: To what extent is the Guide a digital project? Will there be an app, for example?

MacKinnon: We are currently in negotiation regarding various options to produce digital versions or derivatives of the Guide. The old Field Guide is available on at least two apps. I am sure the new Guide will follow.

MacKinnon: They do so because there is still a demand. Many of China’s remote wild areas do not have full internet coverage, so hard copy books are still important there. Also, birders are by definition a sort of collector. They love birds and they love books about birds, be they photos or lovely paintings. I have many bird books covering countries I may never actually visit! In a book you can open a double page plate spread and compare one species with another in a way that is very difficult on a cellphone screen. It is quicker to flick from one page to another, and you can add your own notes or symbols to personalize your own birding memories.

Brelsford: Your long involvement with China dates back to the 1980s. What took you to China? What keeps you there?

MacKinnon: China is a biodiversity hotspot. It is by far the richest non-tropical region of our planet—not just for birds but for plants, insects, etc. It is a huge area that would take several lifetimes to fully explore. I was amazed at the bird richness of Sichuan when I first worked there. More recently China has emerged as the biggest and most influential player on the global stage for environment and biodiversity. Whether the planet survives the next century depends mostly on what China does. I feel I can do more for global biodiversity helping China on its search for “ecological civilization” than anything else I could contribute. I have a Chinese wife, so the ties are strong.

Brelsford: Which species or families of bird in China do you find particularly attractive? Why?

MacKinnon: One cannot avoid being dazzled by the spectacular colors and diversity of Chinese pheasants or the tricky range of glorious pink rosefinches, but I particularly love woodpeckers and owls. They seem to have so much character. China is the best country to see cranes and a great range of noisy laughingthrushes. There are also a number of real thrill species—Scarlet Finch, Grandala, Long-tailed Broadbill, Fire-tailed Sunbird. The two tit-warblers and Wallcreeper always give me a buzz.

Brelsford: You have birded virtually everywhere in China—including, I happily remember, Shanghai’s Cape Nanhui, which you explored with the shanghaibirding.com team in 2017. Describe your favorite places to bird in China.

MacKinnon: There are wonderful birding areas in every corner of China. I love the incredible richness of birds in West Yunnan along the Burmese border. This is a real mixing ground of birds of the Indian subcontinent with Southeast Asian and Chinese avifauna. But I also love the more northern birds I find in the Altai in Xinjiang and Da Xing’anling in Inner Mongolia. Recently I have been getting to see the wonderful birds of the Tibetan Plateau in Qinghai, where I was making films of snow leopards.

Brelsford: What advice do you have for birders new to China?

MacKinnon: China is so large and the bird list so long that it can be a bit daunting at first. I advise the newcomer to really get to know the local and common species very well before venturing out to explore other regions. Add to your growing knowledge and confidence rather than keep plunging into the unknown.

Brelsford: Where can readers go right now if they want to buy the Guide?

MacKinnon: The OUP English version will be appearing in bookshops soon and is already available online. You can get a 30% discount if you order directly from OUP. Order online at www.oup.com/academic with promo code ASPROMP8 to save 30%. To order the Chinese version from Commercial Press, Beijing (商务印书馆), contact editor Hu Yunbiao (huyunbiao@cp.com.cn or +86 151 0105 1949).

Brelsford: Thanks again, John, for doing this interview. May your Guide influence a new generation of birders even more than the Field Guide has done!

Featured image: Birder and naturalist John MacKinnon has been active in Asia since the 1960s. Here are some photos from his long career. Clockwise from top L: with new Guide to the Birds of China, 2022; in Qinghai, 2019; with young birders in northeast China; signing copies of his Field Guide to the Birds of China, 2005; a younger MacKinnon in Sulawesi, 1979; and in the field in 2018. (Collection of John MacKinnon)

8 thoughts on “Exclusive Interview with John MacKinnon, Author of Guide to the Birds of China”