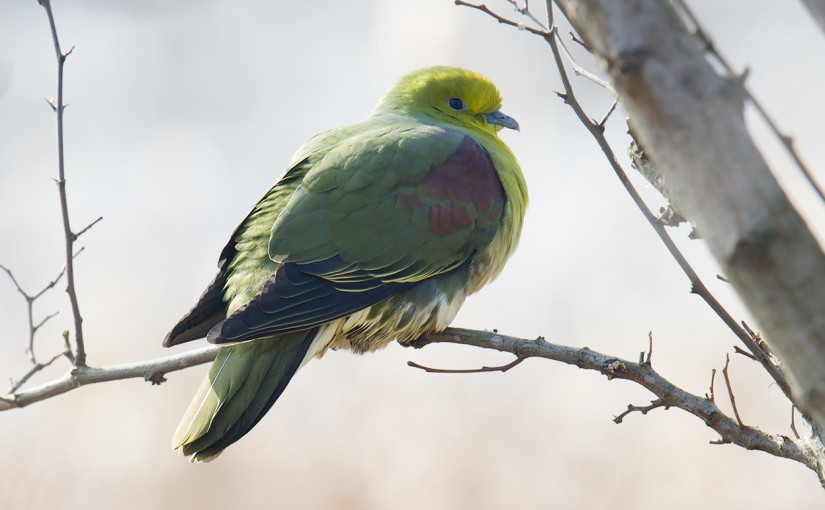 Fresh from our trip to Guangxi, Elaine Du and I on Saturday noted 57 species at Lesser Yangshan and Cape Nanhui. The highlight was White-bellied Green Pigeon at Nanhui. Nanhui also produced 3 Greater Scaup, an impressive 440 Tufted Duck and 470 Kentish Plover, and a single Reed Parrotbill. On Lesser Yangshan, Brown-eared Bulbul was noted once again, and I flushed 2 Eurasian Woodcock.

After the smoggiest, most pollution-filled beginning to a birding day I had ever seen, our respectable showing was a surprise to Elaine and our partners Stephan Popp and Xueping Popp. Starting in Puxi at 06:15, we crawled through thick haze, with visibility sometimes reduced to less than 50 meters. Many birders would have turned back, but we pressed on, cheerfully repeating the two mantras of birding: (1) you never know and (2) wait. Finally, driving across Donghai Bridge, after more than two hours in Stephan and Xueping’s Passat, we saw a hint of blue sky over Lesser Yangshan Island. Free at last!

At that point, just breathing deeply was a bonus; we could have seen not a single bird and felt the trip to the island worthwhile. As it was, however, we generated interesting records such as the bulbul, the woodcocks, and Yellow-bellied Tit, all found in Garbage Dump Gully. Rustic Bunting was on the coastal plain, and among the common winter visitors were 14 Daurian Redstart, 2 Pallas’s Leaf Warbler, and 3 Pale Thrush.

Looking back toward the mainland, we noticed that more and more of Donghai Bridge was becoming visible. We decided to chance it and return to Cape Nanhui. Visibility had improved here, too, and at Dishui Lake, our first stop, we gazed hundreds of meters across the water. Using the spotting scopes, Elaine and Xueping picked through the birds. A search for Horned Grebe was fruitless, but 5 Black-necked Grebe were there, and 330 Falcated Duck, 15 Eurasian Wigeon, and 80 Great Crested Grebe were present in more or less their earlier proportions. In the first big pond north of the Magic Parking Lot, we found the large flock of Kentish Plover—surprising, but not unprecedented, as we had counted a mega-flock of 800 on 28 Nov.

We found the White-bellied Green Pigeon at Microforest 4. In the Shanghai region, I had last noted Treron sieboldii on 24 Nov. 2012 on Lesser Yangshan. The beautiful pigeon was a lifer for everyone but me and set off a series of high-fives, made even more meaningful by the inauspicious beginning of our day. White-bellied Green Pigeon became the 259th species Elaine and I have noted in the Shanghai region since 11 Sept.

Development seems to be accelerating at Nanhui. Near the empty blue-roofed building, backhoes are moving great quantities of earth, and Microforest 8 has been destroyed. The line of reeds at the inner base of the sea wall has been mowed down.