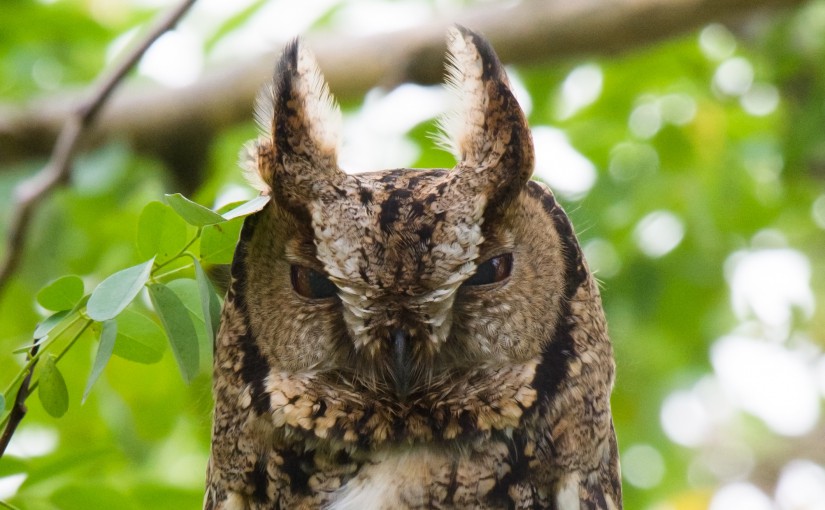 On Sat. 31 Oct., Elaine and I once again birded with Michael Grunwell, Stephan Popp, and Xueping Popp. We noted 83 species on one of the best days I have ever had birding in Shanghai. Japanese Scops Owl was in Microforest 1 at Cape Nanhui and attracted a crowd of photographers. Long-eared Owl greeted us within seconds of our arrival at the Magic GPS Point in Nanhui. We had Jack Snipe, Greater Scaup, Dalmatian Pelican, and 62 Black-faced Spoonbill.

Our day began on Lesser Yangshan Island. Seeing little to stir us, we made an early break for Cape Nanhui. Within seconds of our arrival at the Magic GPS Point, we saw Long-eared Owl flying our way. The migrating owl alighted in some reeds, invisible to us, but not to the Vinous-throated Parrotbill. Recognizing their ancient enemy, the parrotbills cried out manically.

We drove to Shanghai Binhai Forest Park but found little of interest; the action is clearly smack-dab on the coast; once one is even a kilometer inland, the intensity of the birding experience wanes. We quickly headed back. The fields near an empty blue-roofed building were covered with brush and were jumping with buntings. Here we found the Jack Snipe as well as Peregrine Falcon, Pallas’s Reed Bunting, Chestnut-eared Bunting, and the endangered Yellow-breasted Bunting.

Back at the microforests, we had season’s first Goldcrest plus an array of thrushes drawn in part by the precious cover these tiny stands of trees provided and also by the mealworms thrown liberally on the ground by the photographers. A female Japanese Thrush was a good catch by us, and we had Eyebrowed Thrush. The Japanese Scops Owl never budged while enterprising photographers carefully cut away a branch that had been denying them a full-body shot.

Ruddy Shelduck was a first-of-season for Elaine and me. Hair-crested Drongo appeared again on our list. A long scan of the sea just beyond the wall revealed the scaup as well as hundreds of Eastern Spot-billed Duck, a few hundred Eurasian Teal, plus Mallard, Eurasian Wigeon, Northern Shoveler, and Northern Pintail.

The laughs just kept on rolling as we enjoyed our camaraderie as well as the great birds. “This is the best Christmas of my life—and it’s only Halloween!” I joked.