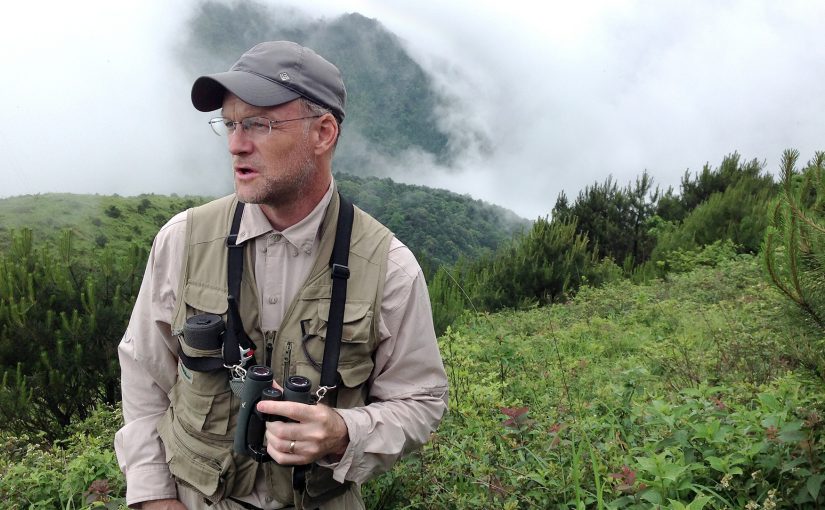 This post covers 28 to 31 May, the second of my two four-day trips to the mountain. A post on the first trip is here.

Fog shrouded the Qingyun Temple area most of the day. When it finally cleared, around 15:00, birds became active, as though it were dawn. Buffy Laughingthrush (8) were the main component of a foraging party that included 3 Greater Necklaced Laughingthrush. They moved through the forest next to the boardwalk. The loud, jazzy sound of Buffy Laughingthrush caused a carpenter working in the area to start singing along. Another powerful singer in that wood was Yellow-cheeked Tit. A beautiful male performed three distinct songs for us, stopping only to devour a caterpillar. Here are two songs:

We noted all our Brown Bush Warbler between Qingyun Temple (27.006583, 117.076389) and the radio tower (27.008488, 117.080711) at altitudes of 1500–1700 m (4,920–5,580 ft.). At Emeifeng, the dense alpine scrub that Locustella luteoventris favors occurs only at those altitudes. Confident in their nearly impenetrable tangle of vegetation, the extreme skulkers allowed us to peek in from distances of less than 2 m. I recorded the soft, monotonous song of this species, like a sewing machine running or an automobile idling.

Besides Brown Bush Warbler, Elaine and I today added to our Emeifeng list Black Bittern and Asian Barred Owlet.

Elaine and I noted 48 species. From the lodge area atop Emeifeng we walked to the little tower on the slope opposite the radio tower. The little tower sits amid pristine alpine scrub and is reachable only by foot. We walked to an elevation of about 1650 m (5,410 ft.). We were searching for Russet Bush Warbler and failed to find it. We found species similar to those in the scrub between the radio tower (27.008488, 117.080711) and Qingyun Temple (27.006583, 117.076389), among them Brown Bush Warbler and Buff-throated Warbler.