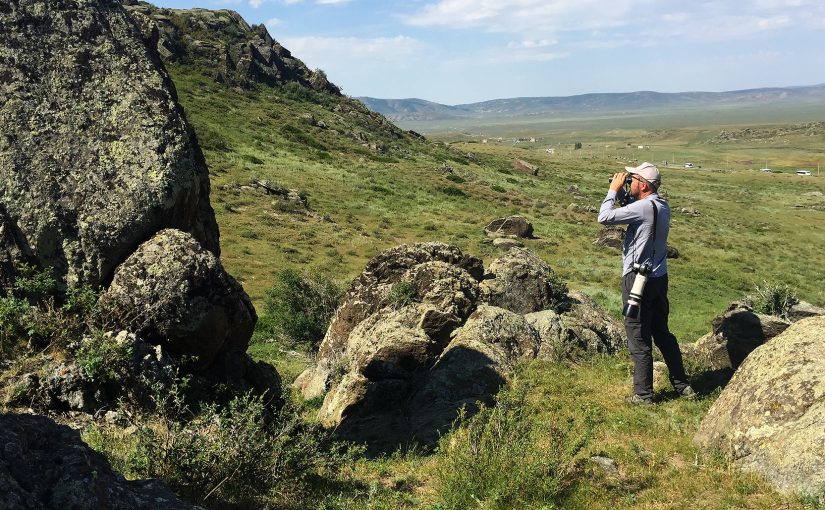 In the image above, Beijing-based Swedish birder Jan-Erik Nilsén scans the rocks for Northern Wheatear near Kanasi Airport, 28 July. The point where Jan-Erik is standing is in the Altai Mountains, at the extreme northern tip of Xinjiang, an area closer to Moscow than to Shanghai. In this post, the second in my five-part series on Northern Xinjiang, you will read my notes on the “European” birds of Xinjiang as well as other observations recorded during my expedition of July 2017. — Craig Brelsford

Not all our activity has been in the Tianshan. A quick trip to Baihu (43.816992, 87.435352), a reservoir in the western suburbs of Urumqi, got us views of White-headed Duck Oxyura leucocephala, an encounter with a family of Chukar Partridge Alectoris chukar, and a heard-only tick of Pallas’s Sandgrouse Syrrhaptes paradoxus.

In Xinjiang, Jan-Erik and I are (and the Han settlers here like to say we are) saiwai (塞外), “beyond the (Great) Wall,” in China, but not in East Asia. We are in Central Asia, thousands of kilometers from the sea, near the center of Eurasia, as the birds we have noted show. Today, with the Tianshan as our backdrop, Jan-Erik and I stood on wavy loess hills made from the buildup over eons of dust borne by wind from distant places on the supercontinent.

The people we have met so far are mostly Han, settlers or descendants of settlers from the east, mainly the northern provinces. As I have noted in other areas of China where Han settlement is recent, everyone here speaks standard Mandarin. There is no local Chinese dialect. As I have been trained in standard Mandarin, my ability to communicate with the locals is greater here than in other areas of China where the vernacular is a non-standard form of Chinese.

Our driver today and throughout the trip was Sūn Yǒng Dōng (孙永东), +86 180-9964-0966. Yong Dong is a Han who was born in Urumqi, knows Xinjiang, dabbles in photography, and drives well. We recommend him.

At Beishawo I jumped out of the car into the scrub—and came face to face with a European Nightjar Caprimulgus europaeus. The goatsucker was roosting on a tamarisk. Soaring overhead was Long-legged Buzzard Buteo rufinus rufinus. We missed Eurasian Stone-curlew Burhinus oedicnemus and Rufous-tailed Scrub Robin Cercotrichas galactotes.

After a long drive west through new towns and farming communities populated by Han settlers, we arrived at Beihu, also known as Daquangou Reservoir, north of Shihezi. Here I had my first-ever look at Great Reed Warbler Acrocephalus arundinaceus, yet another Central Palearctic breeder confined in China to Xinjiang.

On the long drive west to Daquangou, we passed through several checkpoints without incident. It is good to have a firm itinerary so that you can tell the police exactly where you intend to go. The procedure is uniform—a quick noting of passport numbers and sometimes questions about purpose of trip and destinations.

On Monday night, 24 July, our team was 700 km (435 mi.) north of Urumqi in Beitun, near Ulungur Lake. For the past two days we had been birding top-notch locations along the highways.

At Kuitun and at various places along the road we have had European Roller Coracias garrulus.

On Tuesday 25 July and Wednesday 26 July, Jan-Erik and I birded Ulungur Lake and wetlands and riverine woodlands in the Jungar Basin. We were powering ever northward, and by the night of 26 July we were in the Altai Mountains, the northern tip of Xinjiang.

Among the highlights were a rare China record of Sedge Warbler Acrocephalus schoenobaenus. The wetland west of Kaba where the Sedge Warbler was found also gave us Paddyfield Warbler A. agricola and Pallas’s Grasshopper Warbler Helopsaltes certhiola, both singing, as well as juvenile Bluethroat Luscinia svecica and Black Stork Ciconia nigra. We looked for but could not find Corn Crake Crex crex.

The birds most numerous in these riverine woodlands are Common Chaffinch Fringilla coelebs and the bright-yellow Great Tit Parus major kapustini. Among the common non-passerines are Lesser Spotted Woodpecker Dryobates minor and White-backed Woodpecker Dendrocopos leucotos.

The survey of lagoons at the northeastern corner of Ulungur Lake (47.339970, 87.553458) gave us a pair of Mute Swan Cygnus olor and Eurasian Oystercatcher Haematopus ostralegus. Anatids were well-represented; besides the Mute Swan, we also found Greylag Goose Anser anser, Common Shelduck Tadorna tadorna, and Common Goldeneye Bucephala clangula. Bearded Reedling Panurus biarmicus were present, and I once again stumbled on European Nightjar roosting in the scrub.

Drives in China’s largest province are long but we bird as we go. From the car we have seen European Roller and Saker Falcon Falco cherrug and heard singing Common Quail. 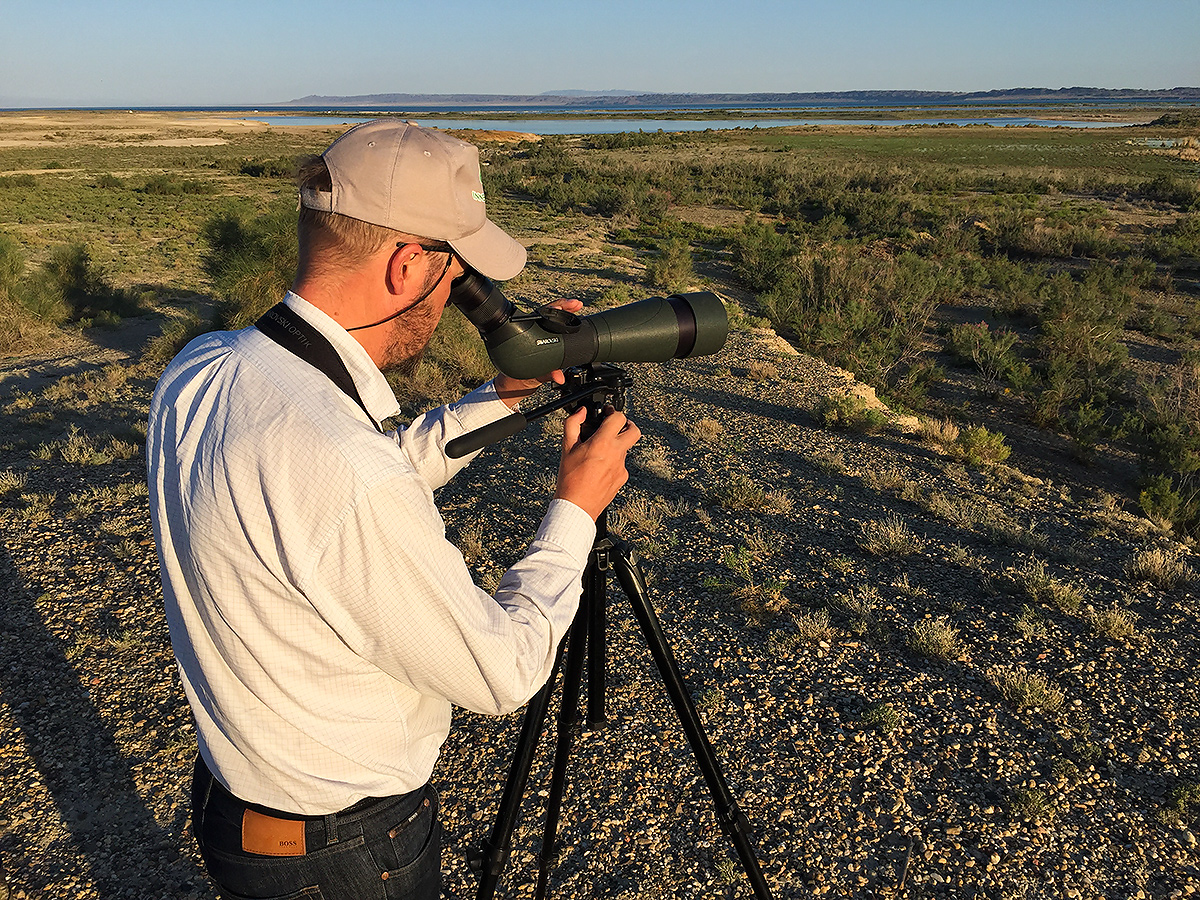 Jan-Erik and I wrapped up the Xinjiang expedition with two days in the Altai Mountains at Kanasi Park followed by a long drive south across the Jungar Basin to Urumqi.

Kanasi yielded “European” species whose ranges in China extend only into Altai. Among them were breeding Siberian Chiffchaff Phylloscopus collybita tristis near our hotel and breeding Ortolan Bunting Emberiza hortulana found along our long mountain walk. Willow Tit Poecile montanus baicalensis also made here its only appearance on our trip list, and we had an unexpected encounter with Eurasian Siskin Spinus spinus.

The highlight of our walk was however supplied by a Central Asian species: Sulphur-bellied Warbler Phylloscopus griseolus, a wallcreeper-like bird and one of the most interesting leaf warblers in the world.

As Jan-Erik and I walked under a blazing sun, the heat intense, we admired, high on the cliff above, Common Rock Thrush Monticola saxatilis and Black Redstart Phoenicurus ochruros phoenicuroides.

Near the base, a nearly vertical rock face, I noticed movement. Sulphur-bellied Warbler were browsing the rocky surface the way their congeners browse the crowns of trees. In arid Central Asia, a leaf warbler has evolved that exploits a locally common but decidedly un-leafy habitat.

The drive of 760 km (472 mi.) back to Urumqi took two days. We broke up the trip with stops at promising habitat. Among the species we noted were Long-legged Buzzard, Henderson’s Ground Jay, and handsome Saxaul Sparrow.

We ended our birding Saturday at Qinggeda Lake near the provincial capital. The 160th and final species of our 10-day trip was Black Tern Chlidonias niger.

This post is the second in a five-post series about birding in Northern Xinjiang.

Notes on Birding in Northern Xinjiang (you are here)