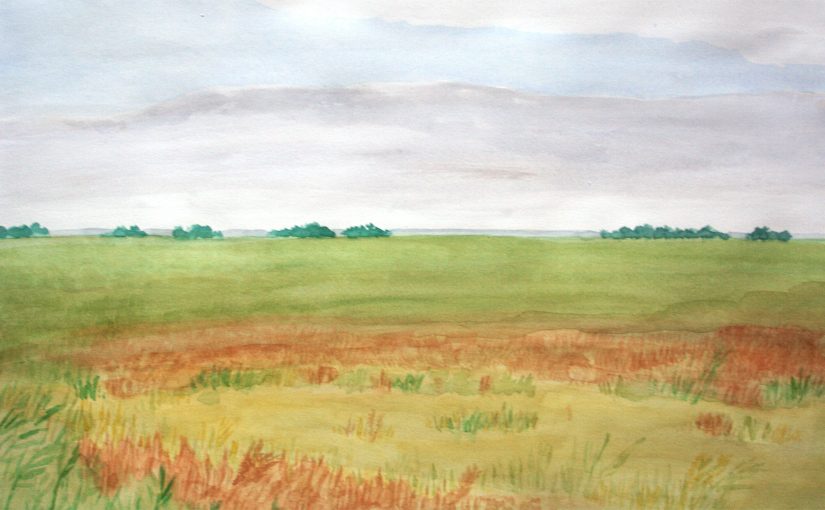 My first visit to Pudong’s Cape Nanhui came on a cold, cloudy day in January 2016. I was disappointed. How could this place, deserted and dull, be the favorite of Shanghai birders? How did this place become one of the hottest birding spots in China?

I arrived by public transport and birded mostly around the Magic Parking Lot (30.884988, 121.968091), the wooded area and migrant trap at the tip of the Cape. Back then I didn’t know it was magic, and I found few birds. I knew little about China and even less about Asian birds, and I had been painting only occasionally.

Seasons have come and gone, I have visited the Cape numerous times, I have broadened my knowledge of ornithology, I have taken Chinese painting lessons and resumed my work with watercolors, and I have honed my ability to draw and paint birds. Now, my vision of Cape Nanhui hardly could differ more from that initial impression.

Through my many visits over several seasons, my vision of Cape Nanhui evolved. I realized that the landscapes of Cape Nanhui are just the sort of landscapes that inspired those great masters, the Chinese painters of old.

I pictured those Chinese masters being deeply moved by the beauty of the vast reed beds, the reeds swaying  gently in the breeze. Using traditional Chinese tools (rice paper, paint brush, and black ink), I attempted to reproduce the motions, forms, and shadows of the reeds of Nanhui, the way the Chinese masters would have done.

I painted in winter, with Eurasian Teal alongside a fishing boat.

I painted in autumn—two cranes exhausted from their migratory journey.

Again in summer I went, this time painting an egret among the reeds.

I went again and again, each time getting a new impression of Cape Nanhui.

Cape Nanhui is not only reed beds, but also mudflats, meadows, and eight tiny wooded areas that we Shanghai birders call the microforests. With my watercolors, I strove to paint each habitat of Cape Nanhui.

I painted a reed bed with the buildings of Lingang emerging in the mist above the reeds (as the mountains in the Chinese shanshui paintings); I painted the wind turbines rising like the mills of Cervantes in Don Quixote; I painted the mudflat and East China Sea crossed by the long Donghai Bridge; I painted a magical Japanese Paradise Flycatcher on the branch of a microforest tree.

A nubby promontory between the mouth of the Yangtze River and Hangzhou Bay, Cape Nanhui is the most southeasterly point of the city-province of Shanghai. Silt from the Yangtze River gave birth to Cape Nanhui, and even today Nanhui lives at the pace of Asia’s greatest river.

The silt is rich, allowing plant life to proliferate, and attracting animals—insects, fish, amphibians, and of course birds. Some, such as Reed Parrotbill, are residents; some, such as Yellow Bittern, breed there; some, such as the endangered Black-faced Spoonbill, winter there; and still others, among them the critically endangered Spoon-billed Sandpiper and Nordmann’s Greenshank, pass through Nanhui while making their astonishing long-distance migration along the East Asian-Australasian Migratory Flyway.

Month after month, season after season, I went to Nanhui with my binoculars, telescope, paper, and black pen (a Mitsubishi uni-ball). I observed carefully, trying to understand and capture with my eyes the distinctive motions and details of each bird, and to reproduce my visual impressions with my pen. It is essential for me to draw birds in the field, to actually see them, as it is moments in the field with birds when one’s experience is the most intense and intimate.

Once home, following the field notes I made, and occasionally referring to great photographs my fellow Shanghai birders have taken, I carefully applied watercolors to my drawings.

During the cold winter at Cape Nanhui, we can spot winter visitors coming from northern China, Korea, Japan, and Siberia, among them Eurasian Teal, Black-faced Spoonbill, and Dusky Thrush. There are also resident species such as Black-crowned Night Heron.

In spring, as temperatures rise and the days lengthen, and during autumn, as summer heat succumbs to the first cold winds, passage migrants can be observed at Cape Nanhui.

The waders arrive at Cape Nanhui after flights of thousands of kilometers on the Flyway. Birds such as Sharp-tailed Sandpiper, Asian Dowitcher, and Far Eastern Curlew use Nanhui as a stopover. In autumn, these waders are en route to places as far south as Australia; in spring, they are headed north, many to Siberia.

Another group of migrants are the passerines, at Nanhui found often in the microforests. Among them are colorful beauties such as Japanese Paradise Flycatcher, Fairy Pitta, Blue-and-white Flycatcher, and Black-naped Oriole.

It took me time to understand and appreciate Cape Nanhui. I look forward to continuing to explore this rich, unique, and beautiful place. May Cape Nanhui live forever, not only in the hearts of all Shanghainese, but also in the hearts of us foreign visitors.

I dedicate this post to Craig Brelsford, founder and editor of this superlative website, shanghaibirding.com. In a series of posts in 2016, Craig called for the conservation of Cape Nanhui and thereby initiated a new era of awareness about the conservationist value of the Cape. Craig is the birder who more than any other person illuminated my path to Cape Nanhui.

Thanks to Craig, Kai Pflug, plusQ, and Chloe for sharing photos with me, many of which served as visual aids for the paintings displayed here.

Featured image: Microforests dot the shoreline of Cape Nanhui, the most southeasterly point of the city-province of Shanghai and one of the most important birding hotspots in China. (Louis-Jean Germain)