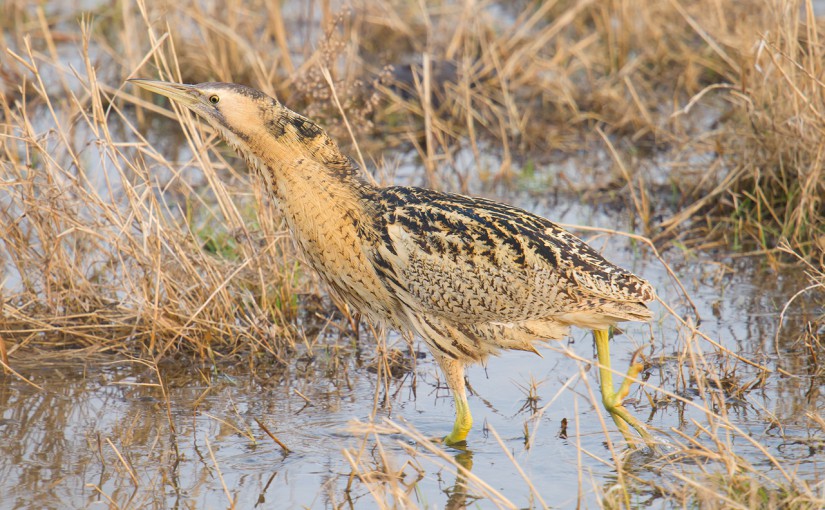 On 30-31 Jan., Elaine and I noted 75 species at Cape Nanhui, Hengsha, and Chongming. We had 6 Lapland Longspur on Chongming and 50 Mew Gull at Nanhui. The pair of Cinereous Vulture remain on Chongming, and we saw a good portion (65) of the Hooded Crane wintering on the great alluvial island. Red-throated Loon was still at Nanhui, and Dishui Lake once again held Greater Scaup (8), Common Goldeneye, and Horned Grebe (3). We had an impressive 350 Northern Pintail in the sea off Nanhui, and though numbers of Gadwall (590) and Falcated Duck (720) were lower than in November, the species maintain a sizable presence on Hengsha.

The longspurs appeared late Sunday, just as snow was starting to fall. The inclement weather must have upset the Buff-bellied Pipit, Eurasian Skylark, and Eurasian Tree Sparrow using the recently plowed fields. Suddenly birds were flying everywhere. The grey sky made visual ID difficult, but some of the birds were calling and identifiable by call. But not all; so I took a flurry of record shots. In one series of images was a bird I had never seen before. I sent some of the images to Jan-Erik Nilsén, who told me that the facial pattern was typical of Lapland Longspur. And so it was. MacKinnon says Calcarius lapponicus “winters in small numbers along bare meadows along E coast between 30° and 40° N and along Changjiang River”; that is a box into which our situation neatly fits.

The views of Mew Gull Larus canus came about because of preparation and luck. Ever since Michael Grunwell moved to Shanghai last year, he has been telling me to look for Mew Gull in Shanghai; he was sure it would show up here in winter. Bolstering that suspicion was a recent report from Jonathan Martinez of Mew Gull in Guangdong.

At Nanhui, gulls usually appear here and there. On Saturday, Elaine and I finally had a chance to view a large group. An afternoon tide was coming in just right, boxing about 300 gulls into a corner of the sea wall. Elaine and I were waiting with camera and spotting scope. “This is the day!” I said. Sure enough, among the dozens of Vega Gull and Black-headed Gull was a sizable element of Mew. We quickly distinguished them from the much larger Vega. The Mew we photographed seem to have a squarer head and beadier eye than would be the case with race heinei; we therefore believe our gulls are Kamchatka Gull Larus canus kamtschatschensis.

The Red-throated Loon was in the large pond behind the Holiday Inn and Magic Parking Lot. Elaine found it doing the scan. Six days earlier, we had 3 Red-throated Loon in a pond a few kilometers north. Around 500 of our Great Cormorant were perching on the giant ring in the middle of Dishui Lake. Driving along the sea wall, we saw a Red-throated Pipit eating seeds left over from the rice harvest, and in the mud below we found three bright-yellow taivana Eastern Yellow Wagtail.

Sunday brought 56 species on Hengsha and Chongming. Our stay of a little more than five hours on Hengsha revealed no extraordinary birds. Eurasian Bittern were unusually visible; 3 of the 5 we noted were standing more or less in the open.

We took the ferry back to Changxing Island, and there, sitting in traffic, I looked out the window of our Skoda Scout and saw 3 Goldcrest. We took the Shanghai-Changjiang Bridge across the Yangtze to Chongming.

The Cinereous Vulture were a few kilometers south of the place where we had found them eight days earlier. As before, the vultures were standing on an earthen bank along the first row of fields behind the canal at the base of the sea wall. Nearby were the Hooded Crane and 21 Common Crane. The cold, grey day was enlivened by a colorful flock of 55 Grey-capped Greenfinch.

Mew Gull and Lapland Longspur became the 267th and 268th species of bird Elaine and I have noted in the Shanghai region since 11 Sept. 2015.