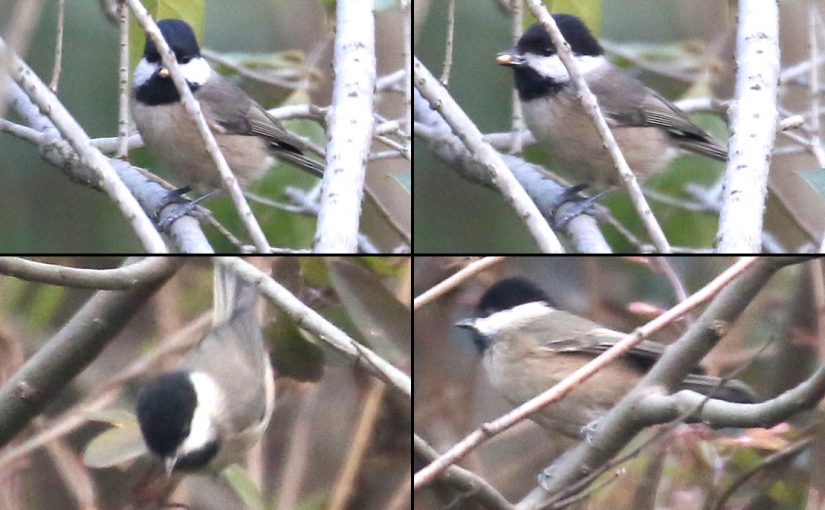 Happy New Year 2018 to you from shanghaibirding.com!

On this New Year’s Day, I bring you glad tidings: a historic first Shanghai record of Marsh Tit Poecile palustris!

The sighting occurred on Christmas Eve at Century Park in Pudong. A pair was foraging in trees and bushes at the edge of a wooded area. (The exact point is by the boardwalk on the western side of the park at 31.215832, 121.541303.) The tits did not appear sluggish or overly tame, as might have been the case had they escaped from a cage.

I originally misidentified the Century Park tits as Willow Tit Poecile montanus stoetzneri. I was thrown off by the large black patch on the chin and throat of the birds, which I took to be strongly suggestive of Willow. In field guides pre-dating the research of Richard K. Broughton, the bibs of Marsh and Willow Tits, in particular their size and shape, are characterized as being important separators of the two species, which are notoriously hard to tell apart.

After my triumphant announcement to the Shanghai Birding WeChat group, member Paul Holt responded, disagreeing with my diagnosis of Willow Tit and cautioning me on an over-reliance on bib, which, Holt wrote, “[doesn’t] hold much water” as a criterion for Marsh-Willow ID. The Century tit, Holt said, “looks like a classic Marsh Tit” (in litt., 2017). Intrigued, I searched the Web for authorities backing up Holt’s assertions, and I came across the two studies by Broughton.

Broughton’s papers shake the foundations of Marsh-Willow research. Of the several challenges Broughton makes to the received wisdom about Marsh-Willow ID, bib is among the most salient. Books renowned and much relied on, such as the Collins Bird Guide (2009), admit only of “some overlap” in the size and shape of the bibs. Broughton finds “substantial overlap.” Harrap and Quinn state unequivocally that compared to Willow Tit, Marsh has “a smaller and neater black bib” (1995). Broughton says that bib is “variable within both species,” prone to “high subjectivity” on the part of the observer, and greatly dependent on the sex, social rank, and age of the bird. “The bib,” Broughton states flatly, “is not a particularly useful identification feature” (2009).

What, then, is a useful identification feature? In the British and European birds Broughton and his co-authors studied, the most reliable criterion separating non-singing and non-calling Marsh and Willow was a special mark on the bill. The authors found that 98.7% of Marsh Tit and 94.2% of Willow Tit could be identified to species according to the presence (Marsh) or absence (Willow) of a whitish spot on the proximal area of the upper mandible (Broughton et al. 2008).

Here in China, how applicable are Broughton’s findings on the whitish mark? To the best of my knowledge, the applicability of the bill criterion on the East Asian subspecies of Marsh and Willow has not been formally tested. It presumably is highly applicable, and the photos here of Marsh and Willow from the Eastern Palearctic comport with Broughton’s findings from the Western Palearctic.

Examine the four-panel photo above. At top left is Marsh Tit Poecile palustris brevirostris, photographed in Heilongjiang in August. The whitish bill mark is clearly visible, as it is in Steven Lin’s photo top right of the Century Park Marsh Tit. In the photo bottom left of Willow Tit Poecile montanus baicalensis, taken in Heilongjiang  in January, abrasions and reflected light create asymmetrical whitish marks that only an inexperienced observer would take to be the bill mark of a Marsh Tit. In the photo bottom right of “Songar” Tit Poecile montanus affinis, taken in Qinghai in August, the bill is unmarked; it is a classic Willow Tit bill.

Broughton’s papers explore other criteria for Marsh-Willow ID, among them the song, “chick-a-dee” call, and juvenile begging call, which have long been known to be distinctive and which Broughton rates as even better indicators of species than bill mark. Broughton also discusses the contrast between the cheek and neck sides in the two species, which like bill mark Broughton calls a highly reliable feature. Both papers are required reading for anyone wanting to get a handle on Marsh-Willow ID, even those of us here on the eastern end of the Palearctic. Indeed, a study using the methods of Broughton on the East Asian forms of Marsh Tit and Willow Tit would be a welcome complement to Broughton’s work and could yield exciting results.