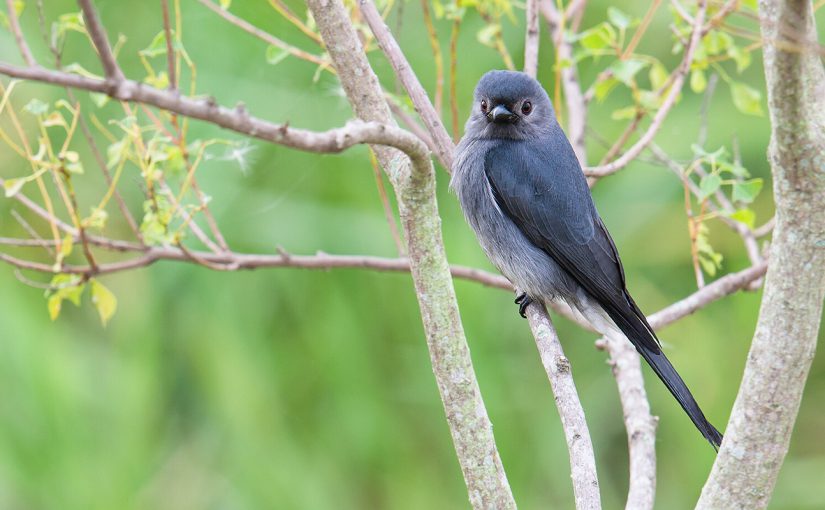 Each spring and autumn, Ashy Drongo Dicrurus leucophaeus migrates through Shanghai. Race leucogenis breeds close to the Shanghai region and is the subspecies most commonly seen in Shanghai. The appearance at Nanhui of ssp. salangensis (pictured above) raises the question of exactly how numerous that central Chinese subspecies is on the Shanghai coast.

How dark was that migrating Ashy Drongo you just saw? You may want to pay attention, because the dark-grey central Chinese ssp. salangensis has been spotted at Cape Nanhui, the coastal birding site in Shanghai. In this post, I lay out the identification criteria for salangensis and the paler, more common ssp. leucogenis. My theory is that salangensis appears at some higher rate in Shanghai than has historically been recorded, which until recently has been not at all. An opportunity to fine-tune our understanding awaits us!

A classic leucogenis (panels 1, 2b, 3b) is easy to distinguish from salangensis (2a, 4). A typical leucogenis is pale grey and shows a large white oval patch around the eye. D. l. salangensis is much darker, and its facial patch is reduced and less well defined. Both have a red iris.

Intermediate forms (3a) are trickier. They may be purebreds showing random color variation or hybrids. The breeding ranges of leucogenis and salangensis partly overlap, with salangensis breeding in south-central China (mainly or exclusively south of the Yangtze River) and leucogenis breeding over a broad swath of eastern and central China from Sichuan east to Shandong and as far south as Guangdong.

Many thanks to Shanghai Birding member Jonathan Martinez. Martinez lives in Shenzhen and is an expert on the birds of southeast China. He was the first to point out that the photos of Ashy Drongo being posted on the Shanghai Birding WeChat group were of salangensis. Thanks also to Paul Holt, who offered his opinion on the breeding range of leucogenis, and to Kai Pflug, for yet another useful photo.

Brazil, Mark. Birds of East Asia. Princeton University Press. Entry on Ashy Drongo, p. 300. Brazil’s opus grows weaker as the distance from Japan (his base) of the birds he is covering grows longer. Brazil offers no information on D. l. salangensis on the east coast of China.

del Hoyo, Josep, et al., eds. The Handbook of the Birds of the World. Lynx Edicions. Vol. 14, “Bush-shrikes to Old World Sparrows.” Entry for Ashy Drongo (p. 220) written by G.J. Rocamora and D. Yeatman-Berthelot. The authors have “N Gansu” as the northwestern limit of the breeding range of D. l. leucogenis. Is that likely? See also Paul Holt’s misgivings in MacKinnon, John & Karen Phillipps, below.

MacKinnon, John & Karen Phillipps. A Field Guide to the Birds of China. Oxford University Press. Entry on Ashy Drongo, pp. 281-2. MacKinnon has breeding range of D. l. leucogenis stretching to Heilongjiang. Paul Holt (Shanghai Birding WeChat group) disagrees, saying the northeastern limit is more likely Shandong. Holt writes: “I think that the weakest aspect of John MacKinnon’s ground-breaking field guide are the ranges, and again I don’t think HBW’s accurate on that front either. I’d discount Heilongjiang, Jilin, Liaoning, and Hebei from the breeding range of leucogenis Ashy Drongo and don’t believe that it can breed further north than Shandong (where it might not even occur) and southernmost Shanxi.”