by Chris Feeney
for shanghaibirding.com

I decided to make an early-summer trip to Nome (64.498136, -165.397393) and Gambell (63.779089, -171.729865). My main reason for going was to try for Common Ringed Plover at Gambell. A few pairs of this Eurasian shorebird nest at Gambell. I had hopes for some other Eurasian strays, but it was getting late in the migration season, so I was not optimistic. Two friends joined me. I planned for us to stay at Gambell for nine days and Nome for nine more days.

We got fogged in at Nome for a day before being able to go to Gambell. In a way, that worked out for us, as I ran into Gavin Bieber who had just come back from Gambell with his WINGS tour. He casually mentioned that they had seen a Hawfinch at the south sewage site. Wow, that would be an ABA (American Bird Association) bird for me!

We got to Gambell the next day and immediately went to the spot where the Hawfinch had been seen. At first we did not see anything. Then, my friend from Alaska asked if they had rosy finches on the island. I looked over and there was the Hawfinch! It was cooperative and stayed around several more days. It moved from the vegetated area near the pond to an area called “The Revetments.” These are mounds that have been dug out in the past for gravel. They are well-vegetated and often hold good birds.

We did find Common Ringed Plover. Not many—only two or three birds. However, since that was my main target, I was thrilled.

A day later we were driving along the edge of the south beach when a bird popped up from the sand dunes. It was a pipit, but initially it was tough to get a firm identification. My friend from Canada, an excellent photographer, got some decent photos of the bird. Later that evening we pored over the books. Both my friends thought it was an Olive-backed Pipit, but I was a bit more cautious. I sent the photo to Paul Lehman to get his thoughts. Paul ran WINGS tours at Gambell and spends his falls there for over two months every year. He responded that it was indeed an Olive-backed Pipit!

We expanded our birdwatching to some of the boneyard areas. We were walking through the Old Town boat yard when a very small bird popped out of a hole. It landed on a wooden cross-beam. I had seen one in China! It was a female Siberian Rubythroat. A real bonus bird. At that time we were getting some westerly winds, so that probably brought the rubythroat over from Russia, 42 miles (68 km) away. The bird landed under my ATV, and my Canadian friend once again got a great photo. By now the trip had exceeded my expectations.

Unfortunately, the winds shifted. Now coming from the east, our string of Eurasian strays ended abruptly. We still had Nome though.

The main target in Nome was Bristle-thighed Curlew, but we had heard rumblings that there might be a Red-necked Stint near Safety Sound. That was the case. We found one Red-necked Stint for sure, and possibly a second bird in a different area. We also found several Northern Wheatear. These Eurasian birds extend their range into Alaska to breed. They then fly back across the Bering Strait to Russia before going south to their wintering grounds in Africa.

This trip made me want to return for more Eurasian strays.

This post is part of a series on East Asian birds in Alaska, Siberia, and the Russian Far East. See also 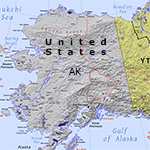 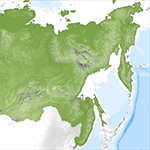 Chris Feeney is a lifelong birder who lives in Augusta, Georgia. Feeney has 825 birds on his ABA list. He has several first and second North American records, among them Pallas’s Grasshopper Warbler, Blyth’s Reed Warbler, and Sedge Warbler. Feeney has birded in 45 U.S. states and 8 Canadian provinces as well as Europe and China. He has made 13 trips to Alaska. View all posts by Chris Feeney

One thought on “Shanghai Birds in Alaska, Part 3: Gambell & Nome”