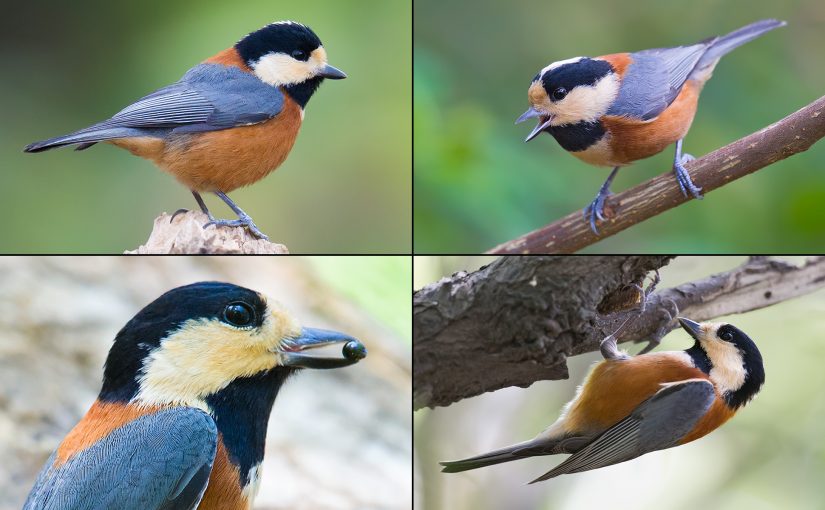 From September through December 2012, Varied Tit burst into Earth’s Greatest City. For those few months, the status of Sittiparus varius varius in Shanghai went from “unrecorded” to “locally common.” I noted Varied Tit on various occasions on Lesser Yangshan Island and in urban Shanghai at Zhongshan Park, Changfeng Park, and Binjiang Forest Park.

The mass movement saw incursions of Varied Tit up and down the Chinese coast, with reports from as far south as Hong Kong. Unusually high numbers of Varied Tit were reported in South Korea as well as Japan (Loghry & Moores 2012).

The episode captured many birders’ imaginations, not only because of its ornithological interest, but also because Varied Tit is a beautiful bird.

Five years later, the 2012 irruption remains remarkable. Despite the growing number of birders in the Shanghai region, no one here has managed to find Varied Tit, a species not especially prone to irruptions.

Harrap and Quinn describe Varied Tit as resident throughout its range, with “some evidence,” some of which is “contradictory,” of movements south and to lower altitudes in winter. The word “irruption” does not appear in the authors’ otherwise exhaustive account of Varied Tit (1995).

In China, the nominate form of Varied Tit is confined to Northeast China (Liaoning and southern Jilin). It is resident as well on the adjacent Korean Peninsula and the main Japanese islands.

Loghry, Jason & Moores, Nial. Varied Tit, Chinese Nuthatch and Yellow-bellied Tit: what else is on the move? birdskoreablog.org. (Accessed 8 April 2021)

3 thoughts on “In 2012, Varied Tit Irrupted into Shanghai”