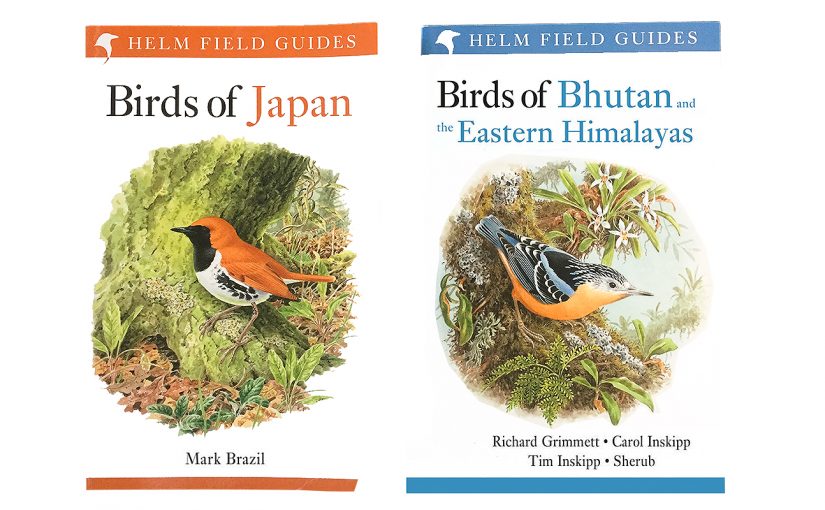 Shanghai birders should use Birds of Japan and Birds of Bhutan and the Eastern Himalayas. I served as proofreader of both books, published by Helm Field Guides. Keep Japan on your bookshelf or in your car as you bird the coast of China, and use Bhutan as your first reference in western Yunnan.

Authored by Mark Brazil, Birds of Japan follows Brazil’s 2009 opus, Birds of East Asia, the best field guide for the coastal provinces of China. Birds of Japan sees Brazil returning to his first love, Japan, where Brazil has been active since the 1980s.

Birds of Bhutan and the Eastern Himalayas, by Richard Grimmett, Carol Inskipp, Tim Inskipp, and Sherub, covers not just Bhutan but also the neighboring Indian states of Sikkim and Arunachal Pradesh. All border Tibet, and Arunachal Pradesh extends east to a point only 80 km (50 mi.) from the Dulong Gorge in Yunnan.

Japan and Bhutan each come with introductions to their regions, richly illustrated with maps and photographs. With its detailed “Where to Bird” section, Grimmett et al.’s 38-page opener is as thorough an introduction as a birder is likely to find to the eastern Himalayas. Brazil’s is less extensive but still does justice to a biogeographically complex archipelago that stretches 3000 km (1,900 mi.) from subarctic Hokkaido to the subtropical Ryukyus.

Japan and Bhutan repurpose much artwork from earlier Helm works, Japan drawing from Birds of East Asia and Bhutan from Birds of the Indian Subcontinent. There is, however, much that is new. In Japan no less than 18 new illustrations of White Wagtail are offered, 12 covering the three ssp. (leucopsis, ocularis, lugens) most common on the Chinese coast. Illustrations better than those in Birds of East Asia are provided for Chinese Egret and several species of duck.

Published nearly a decade after East Asia, Japan incorporates many of the ornithological advances made since 2009. For example, in East Asia Brazil incorrectly writes that the calls of Pale-legged and Sakhalin Leaf Warbler are indistinguishable, and the illustrations suggest that the morphological differences between the two species are appreciable. In Japan, Brazil describes the higher-pitched call of Pale-legged, and the new paintings convey more accurately the near indistinguishability of the species on plumage and bare parts.

To a China-based birder, Birds of Japan offers regional interest and usefulness in the coastal provinces, where it can serve as a backup and partial update to Birds of East Asia. Japan also provides a foretaste of a second edition of East Asia. “The publisher has expressed strong interest in a new edition,” Brazil wrote, “and I have the artist already lined up. I am just awaiting a contract” (in litt., 2019).

Bloomsbury touts Birds of Bhutan and the Eastern Himalayas as “the one guide you’ll need on a visit to this incredible corner of Asia.” Including the neighboring Indian states along with Bhutan was an inspired decision, broadening the scope of the book without diminishing its coherence and increasing its usefulness in the Himalayan regions of China. For birders in the Dulong Gorge and at Baihualing, Ruili, and other hotspots in western Yunnan’s Gaoligong Mountains, Bhutan can replace Craig Robson’s Birds of Southeast Asia. Bhutan has better species descriptions than Robson’s sometimes cryptically concise work, and its illustrations excel those in Robson.

Birders in other parts of China will find Bhutan useful. In Himalayan south Tibet, in particular Yadong, wedged between Sikkim and Bhutan, birders will do just fine with Bhutan and only Bhutan in their backpack. Bhutan will prove useful in regions east of Himalayan China, notably Sichuan, as well as on the Tibetan Plateau. In southern Yunnan (Xishuangbanna), whose avifauna is more Southeast Asian than Himalayan, Bhutan can back up Robson.

Like Birds of Japan, Bhutan includes recent ornithological breakthroughs, among them Himalayan Thrush, a species described in 2016 by Alström et al., and Bugun Liocichla, discovered in 2006 in Arunachal Pradesh. Other Himalayan specialties sought after by China-based birders, such as Sclater’s Monal, Fire-tailed Myzornis, and Beautiful Nuthatch, receive ample coverage in the species accounts and introduction of Bhutan.

China sorely lacks good bird books. On the Helm Field Guides bookshelf, there are gaps where works such as Birds of Sichuan and Yunnan and Birds of the Tibetan Plateau should be. Birders in China have long had to cobble together field-guide strategies, using as a major component field guides covering regions of Asia bordering China. One welcome development has been the increasing quality of those guides. Nowhere are the improvements more evident than in Birds of Japan and Birds of Bhutan and the Eastern Himalayas.

Do you own either of the books discussed in this article? Add your review in the comments below.

Featured image: Covers of Birds of Japan (2018) and Birds of Bhutan and the Eastern Himalayas (2019), published by Helm Field Guides/Bloomsbury. (Craig Brelsford)