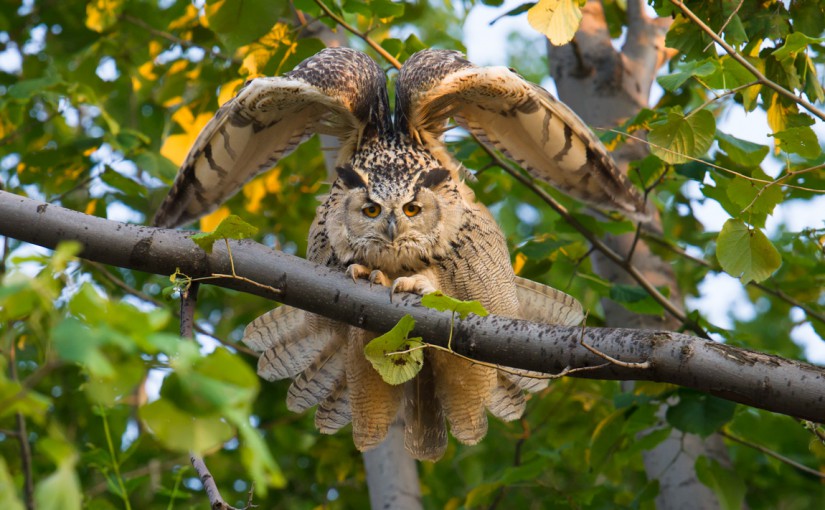 “Birding China’s Extreme Northeast” covers trips to northern Inner Mongolia and eastern Heilongjiang in the winter and summer of 2015. There are also brief entries from Hohhot in south-central Inner Mongolia.

The report has six segments. This is the Part 2.

Part 2a: One Day in Hohhot

Elaine and I sneaked in a bit of birding during a business trip to the capital of Inner Mongolia. We noted 14 species at Hohhot Botanical Garden. Besides the omnipresent Eurasian Magpie and Eurasian Tree Sparrow, the most conspicuous bird was 31 Hawfinch. We noted 2 Common Redpoll, 2 female Common Rosefinch, and 7 Red-throated Thrush. I sound-recorded Grey-capped Greenfinch (00:25; 1.8 MB):

Weather: 11°C, overcast. After recent rains, a frosting of snow was visible on the nearby mountains.

On Fri. 10 July, Elaine and I flew from Hongqiao Airport in Shanghai to Tianjin, where we spent the night. Today, we flew from Tianjin to Hailar, where we met our Swedish friend Jan-Erik Nilsén. We drove our rented Honda CR-V to Wuerqihan. At a forest near Yakeshi, Pine Bunting was singing. On the X302 between Yakeshi and Wuerqihan, we found Thick-billed Warbler, Black-tailed Godwit, and Eurasian Curlew. Pallas’s Grasshopper Warbler were singing, and Oriental Cuckoo were calling.

As we were driving, we saw, far in the distance atop a billboard, a Great Grey Owl. As I stepped out of the car to admire it, a car came from the opposite direction and scared it away. We sighed, drove to the billboard, and parked. Would the owl come back? No. But something interesting occurred. From somewhere in the forest came begging calls, which I recorded (00:08; 1.1 MB):

Those are clearly the begging calls of a juvenile Great Grey Owl. A breeding record! That is good news, though not wholly unexpected. Though “very rare in China” (MacKinnon), Strix nebulosa lapponica has one stronghold in this country, and that is the Greater Khingan Range of Hulunbeier–a fact known to the birders who find the species here each year (usually in winter). What’s more, next to us was ideal Great Grey Owl habitat, being “dense boreal or coniferous forest … with openings,” as Handbook of the Birds of the World describes it–again, no surprise, as the forest next to which we were standing is known to hold Great Grey Owl and other owls. Why, then, is a breeding record important? A breeding record matters because it confirms that at least some of the Great Grey Owl in the region are not simply wandering to Hulunbeier in the winter but are using the area year-round.

We spent the night at the feeding station near Wuerqihan (49.651972, 121.615111). Six months ago, when Elaine and I were here with Brian Ivon Jones, the temperature was 30 degrees below zero, and Common Redpoll, Arctic Redpoll, and Eurasian Bullfinch were relying on the seeds. The land around us was completely white, the trees dark sticks jutting from the blanket of snow. Tonight, the feeding station is lushly vegetated, mosquitoes and flies are harassing us, and Gray’s Grasshopper Warbler are singing us to sleep.

We noted 44 species between Wuerqihan and Genhe. We heard Arctic Warbler singing and found Baikal Bush Warbler. At camp in the morning, we again heard Gray’s Grasshopper Warbler. Common Cuckoo and Oriental Cuckoo were calling. By the stream at the station, Dusky Warbler was defending territory. We drove down the main road and parked in shade for breakfast. Radde’s Warbler were singing powerfully, and we saw White-throated Rock Thrush. Along the road we found Northern Goshawk and Crested Honey Buzzard. At Ailin we found House Sparrow associating with Eurasian Tree Sparrow. Between Ailin and Yituli He, Jan-Erik heard Arctic Warbler. At Yituli He we found breeding Northern Wheatear.

Near Genhe, we were driving 60 km/h and in the middle of a conversation. Suddenly Jan-Erik said, “I just heard Siberian Bush Warbler!” (IOC: Baikal Bush Warbler). I hit the brakes and parked. Within a few seconds, we had our bird. Jan-Erik has sharp ears!

Here are some of the recordings I created today:

Weather: Foggy in morning, then sunny.

We noted 25 species on the X324 between Genhe and Cow’s Ear River and on the forest road leading from Cow’s Ear River into Hanma National Nature Reserve. We also made a foray into a forest, driving on a dirt road off the X324. There we found a family of Black Grouse. The unpaved road from Cow’s Ear River to Hanma Nature Reserve was rich in birds. Siberian Thrush and Siberian Blue Robin were among the more interesting bird species. As darkness fell, I sound-recorded a Siberian Blue Robin singing from thick cover (01:25; 4.2 MB):

We noted 41 species. The long day began at 03:45 at our camp in the mountains E of Cow’s Ear River and ended in Mangui, near the Inner Mongolia-Heilongjiang border.

Jan-Erik and I were birding at 04:00 in the secondary forest around our camp, elev. 710 m. At that time, the flies that would annoy us so much during the day were still sleeping. Jan-Erik and I found a singing 1st-summer Red-flanked Bluetail (00:03; 913 KB):

During a long lunch break at midday, we heard Baikal Bush Warbler. Arctic Warbler was singing, as were Radde’s Warbler, Pallas’s Leaf Warbler, and Two-barred Warbler, the latter providing music as we breakfasted in camp (00:05; 995 KB):

For the first time in NE China, I viewed White’s Thrush. Black Grouse was seen again, and we found a family of Hazel Grouse.

We wanted to see high-elevation, uncut forest, but we were stopped at the entrance to the core area of Hanma Reserve. We drove back to the X324 and Cow’s Ear River and headed N to Mangui. Between Alongshan and Mangui stands a thickly forested island in the Jin River. There, we noted White-throated Needletail and Northern Raven. In Mangui, we set up at the pretty good Jùxiān’gé Dàjiǔdiàn (聚仙阁大酒店, +86 133-4700-5030, +86 131-3493-5030, 180 yuan/night).

Among our 21 species were 23 Scaly-sided Merganser and 4 Common Goldeneye at Crescent Moon Bend in Yikesama National Forest and 15 House Sparrow in Mangui. We are finding mixed flocks of Long-tailed Tit and Willow Tit. Hazel Grouse is probably a very common species in these mountains. Scenery around here amazing; Crescent Moon Bend is one of the greatest sights I have seen in NE China. Tomorrow we will re-enter Yikesama and camp two nights in the park. We plan to bird the highest peak, elev. 1409 m. We believe Yikesama is the best look at the Greater Khingan Range that we are likely to get, and we therefore have made our visit to that park the heart of this part of our trip.

Today was our first of three days around Pine Ridge in Yikesama National Forest. We noted 31 species. Among the birds with young were Asian Brown Flycatcher, Taiga Flycatcher, Rufous-tailed Robin, and Tristram’s Bunting. Arctic Warbler were singing (01:00; 3.2 MB):

Today was Day 2 of our three-day exploration of the area around Pine Ridge Peak. We noted 28 species. We had our first record of Mugimaki Flycatcher in NE China, and we heard 13 Arctic Warbler. White-throated Rock Thrush had young. Resting in the car, we saw a Sable creep across the road behind us.

At Crescent Moon Bend we saw a White’s Thrush foraging on the rocky bank like a sandpiper. We missed Scaly-sided Merganser but saw Common Goldeneye. We returned to Jùxiān’gé Dàjiǔdiàn in Mangui and spent the night.

We drove 255 km from Labudalin to Manzhouli. From Labudalin we took the S301 W to the X904. The X904 skirts the Ergun River, which serves as the border with Russia. We had a memorable day, noting 66 species. We found Blyth’s Pipit for the first time in Inner Mongolia and had Steppe Eagle in a good wetland on the Sino-Russian border. We noted a large array of waders, among them Curlew Sandpiper. In Labudalin Liu Dui we found 25 House Sparrow and for the first time viewed Mongolian Ground Squirrel. We took care along the X904, knowing that on the international border we would attract attention with our scopes and cameras. We never lingered too long at any single site. The grassland scenery was spectacular; the nickname of the U.S. state of Montana, “Big Sky Country,” would fit well here. Most of the tourists we saw were Han and not from Inner Mongolia. Most of the locals were ethnic Mongolian.

We took it easier today but still had an eventful day, noting 42 species. We drove from Manzhouli to the N shore of Hulun Lake and back to Manzhouli. At the lake we had our first NE China record of Isabelline Shrike.

We left Manzhouli and drove 122 km along the W side of Hulun Lake to New Barag Right Banner. Among our 42 species was Demoiselle Crane. Isabelline Shrike was once again noted. We recorded the flight song of Blyth’s Pipit:

Common Swift: hundreds seen in each town every day at dusk. Quite a sight!

Among 18 Red-necked Stint was 1 with bands.

On 24 July Jan-Erik and I had plenty of opportunities to study Richard’s Pipit and Blyth’s Pipit. I greatly needed this experience, for before this Hulunbeier trip I had had only fleeting glimpses of Blyth’s. After our many encounters with both species, I am beginning to appreciate the many subtle but relatively consistent differences between the two Anthus species. In the Richard’s we were seeing on 24 July, we noted the sharp points to the blackish centers of the median coverts. Blyth’s generally, but not universally, has squarish blackish centers. Another important marker of Richard’s is the very long hindclaw. Usually, a combination of characters rather than a single feature has been leading us to assign the pipits we’ve been seeing to A. richardii or A. godlewskii.

We said goodbye to Jan-Erik at the airport in Hailar.