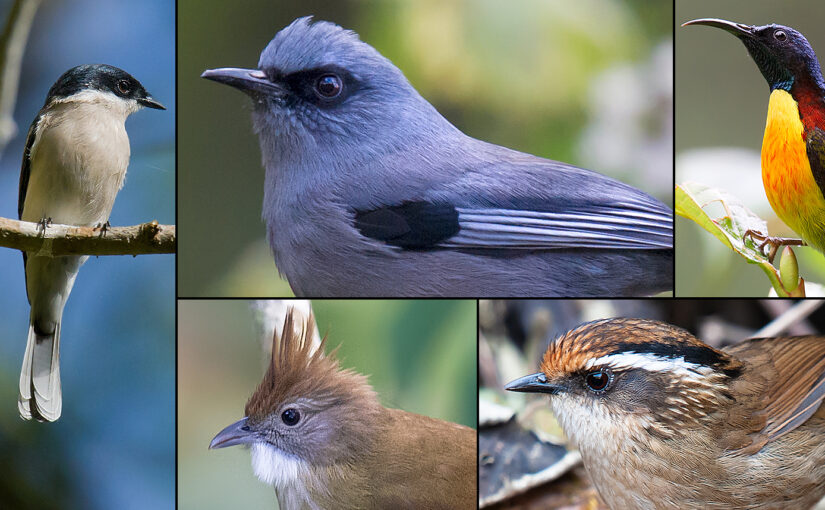 As part of my extended birding tour of Yunnan, from 18 to 23 April I visited Gongshan (27.73887, 98.6717553) in the Nujiang or Salween River Valley. I noted there many specialities of southwest China, among them Bar-winged Flycatcher-shrike, Puff-throated Bulbul, and Green-tailed Sunbird, as well as species that in China occur mainly or exclusively in western Yunnan, among them Davison’s Leaf Warbler and Beautiful Sibia.

My first obstacle was to enter the valley. I arrived in a shared taxi from Lushui. The police interrogation was lengthy and involved a luggage search. After 45 minutes I argued they were holding up the whole taxi for one man and was let through. The next two or three checkposts to Gongshan were easy.

Upon arrival I immediately made queries about getting to the Dulong Gorge whilst my PCR test was still valid. Impossible, I learned—no tourists, least of all foreigners, have been allowed into the Gorge since nine months.

Gongshan had improved since my last visit in 2013. There are a couple of “Western” restaurants selling chicken burgers, etc. There is also a one-way traffic system which works and a walkway along the Nujiang which is pleasant. This walk/cycleway extends hundreds of kilometres along the Nujiang, imprinting very firmly the hand of man on formerly untouched scenery.

Next day I took a taxi as far as possible on the road to Dulong Gorge—about 20 km (12 mi.) to the gate at Heiwadi (27.7766140, 98.6019980). Having had too many bad experiences, I did not approach the guards. The only vehicles going through were trucks with construction materials. It seems even in normal times private cars cannot enter Dulong Gorge—tourists, in typical China style, transfer to minibuses.

I walked back to Gongshan, following a beautiful but adventurous forest path—steep with several parts washed down the hillside in the rain.

For the next three days I selected valleys in the extremely biodiverse Gaoligong Mountains. I chose routes at random or from Google Earth, walked up until tired or around 2 p.m., then came back down. The forest is excellent, and given good weather I would have carried on longer doing this. However, this behaviour aroused much suspicion in the police, who visited my hotel every day for explanations. It was not pleasant. They specifically said not to try to reach Dulong Gorge—which actually would be possible for a fit walker.

At this point continuous rain set in, and I decided the best option was to retrace my steps to Lushui. The police were much easier leaving the valley and it felt good to be free from their attention in Lushui.

I clocked 44 species and had some of the best walks of my life around Gongshan. The town looks a bit grotty with the high humidity but has the potential to be a first-class trekking centre.

The following is the list of birds I noted around Gongshan. Hyperlinks connect to entries in Craig Brelsford’s Photographic Field Guide to the Birds of China: