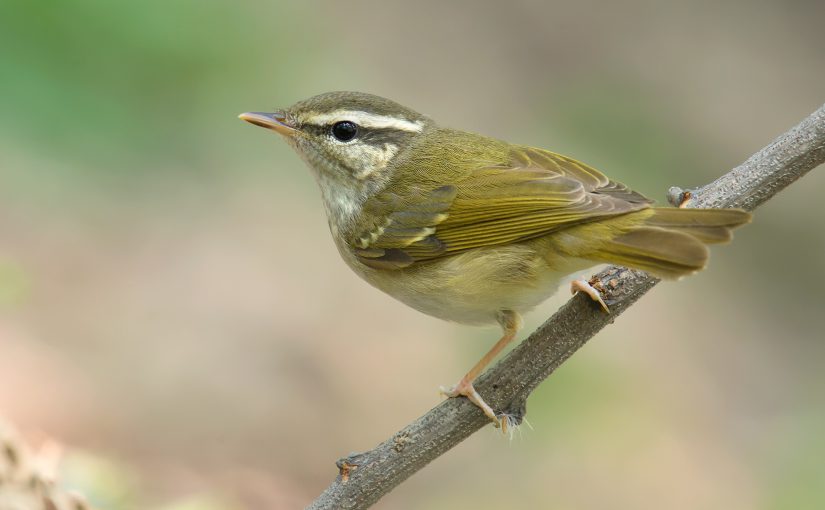 Today, 5 May, I got my first-ever record of Sakhalin Leaf Warbler. The bird was singing on the tiny island at the little central pond (31.224111, 121.414194) at Zhongshan Park, Shanghai. Singing nearby was Pale-legged Leaf Warbler.

I saw a Pale-legged or Sakhalin Leaf Warbler, pulled out my iPhone, and played back a recording of Pale-legged. I got no response. I played Sakhalin for a while, got no response, then stopped. I knew not to walk away, but wait. As Shanghai is outside the breeding range of both species, their urge to sing may not be strong, but it is May and the testosterone is flowing. A response may come after a lag.

I was standing at the edge of the little pond, admiring Narcissus Flycatcher. My brain was barely registering the normal background noise being made by Japanese Tit, Light-vented Bulbul, Chinese Blackbird, Chinese Grosbeak, caged Chinese Hwamei, and old folks practicing qigong. Suddenly from the din came an anomalous sound. I trained my attention to the high-pitched whistle. Sakhalin! My playback had apparently been heard and had attracted a Sakhalin to the tree on the island closest to me on the “mainland.” I glimpsed the bird but saw nothing in its plumage or bare parts to tell it from Pale-legged. In the field, the only reliable element separating the two species is song. Sakhalin makes a three-note whistle, very different from the cricket-like trill of Pale-legged. The three-note whistle is exactly what I was hearing.

After a few minutes, the singing stopped, and then, as if on cue, the trill of Pale-legged surged out from the foliage. I again played back Pale-legged recordings and this time got an immediate and very strong response. Making the tink call, a Pale-legged flew to my side of the pond and lingered in trees near me. The tink is apparently similar to that of Sakhalin and therefore not a reliable separator. But soon the tink was followed by another trill, and I knew I was looking at Pale-legged.

What luck! There I was, in the middle of Earth’s largest city, hearing the songs of two East Asian leaf warblers, one of them (Sakhalin) little-known. Does urban birding get any better than this?

I sound-recorded both species. In all the recordings, one can hear the din from a busy inner-city park. In the first of the two song fragments of Sakhalin Leaf Warbler, among the species heard in the background is Ashy Minivet.

Thanks to Jan-Erik Nilsén, Jonathan Martinez, and Jason Loghry for their help in today’s project.

Featured image: Pale-legged/Sakhalin Leaf Warbler Phylloscopus tenellipes/borealoides, on migration in Jiangsu, China, May. Some authors note subtle differences in plumage and structure, but the features overlap, making non-singing Pale-legged and Sakhalin virtually indistinguishable in the field. The species pair is distinguishable from other leaf warblers by their very pale, pink legs. The species pump the tail steadily and often cling to tree trunks, somewhat like a nuthatch. Pale-legged breeds in the Russian Far East and northeast China; Sakhalin breeds on Sakhalin Island and in Japan. (Craig Brelsford)