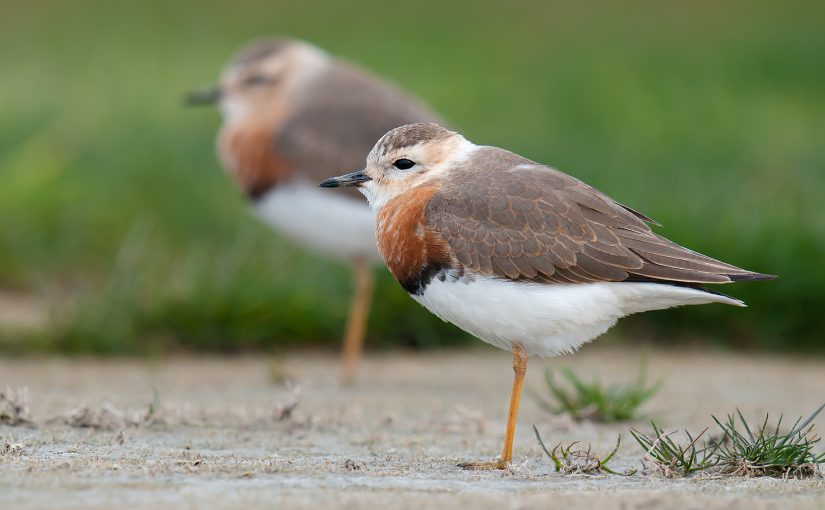 For birders in Earth’s Greatest City, finding Oriental Plover is one of the rites of spring. On Sun. 26 March on Shanghai’s Hengsha Island, our three-man birding team tracked down 25 of these passage migrants. The encounter was the latest in a series of interesting experiences I have had with the East Asian specialty.

Along with Shanghai birders Michael Grunwell and Komatsu Yasuhiko, I drove on Saturday night 25 March to Changxing Island, crossing to Hengsha on the ferry. We set up for the night at my accustomed bed and breakfast, Héngshā Bànrìxián Mínsù (横沙半日闲民宿, +86 150-2164-5467, no English).

At 05:40 the next morning we zipped through the gate (31.297333, 121.859434) to the vast reclaimed area of Hengsha Island. Formerly intertidal shoals at the mouth of the Yangtze River, the area, now walled in, offers some of the best birding in Shanghai.

Michael and Hiko had no experience with Oriental Plover. I have seen the species various times. One of the highlights of my birding career occurred on 29 March 2010. On a cool, early-spring afternoon at the old sod farm (31.205847, 121.777368) at Sanjiagang in Pudong, I lay on my belly in the presence of 30 Oriental Plover. What an unforgettable experience that was.

The sod farm has since been destroyed, but memories of those times, as well as my observations of the species on its breeding grounds near Hulun Lake in Inner Mongolia, still live in me, and they told me where to look for the bird. One needs to find habitat reminiscent of the dry, stony steppe on which the species breeds.

On Hengsha, such habitat is abundant, and we scoured all the likely spots, among them the place where my wife Elaine Du and I found 3 Oriental Plover last April 9.

We were driving along the coastal road that skirts the southern edge of the reclaimed area. The morning was hazy, with air pollution giving me the sniffles, but even with the reduced visibility one could appreciate the power of the Yangtze looming behind.

Here, the longest river in Asia releases into the East China Sea the water collected along its course of 6,300 km (3,915 mi.). On clear days, one can see the famous skyline of Pudong, 38 km (24 mi.) away. On Hengsha Island, one stands on the eastern edge of Eurasia at the mouth of China’s greatest river in the shadow of Earth’s greatest city.

As we drove, the reed beds and marshy areas began to recede, and there opened up before us drier, grassier habitat, perfect for Oriental Plover. Stopping the car, I intoned, in a voice recalling Brigham Young, “This is the place.” (The coordinates are 31.301475, 121.917442.)

We broke out a forest of tripods and set upon them our spotting scopes. Michael, the seasoned veteran, saw the plovers first. Continuing our Wild West theme, Michael shouted, “Eureka!” His head was motionless, glued to the scope, but his arms were waving, and he was dancing a jig.

Michael and Hiko moved in for a closer look. I stayed above, scanning the scene through my Swarovski ATX-95. Males and females were in partial breeding plumage. They were running fast across the turf, picking off invertebrates. Twice they flew, and I appreciated their powerful, erratic flight and long wings.

We found 16 Oriental Plover there. We found another 9 on the north shore of the reclaimed area, on the mudflats.

Oriental Plover Charadrius veredus is listed as a species of Least Concern by the IUCN. A survey in 2010 came up with an estimated world population of 160,000, an encouraging number. The species is helped by the sparse human population both in the area where it breeds (mainly Mongolia) and where it winters (mainly Australia).

The species may be helped as well by its migration patterns. There is evidence that migrating Oriental Plover overfly much of Southeast Asia and possibly even China, areas where the hand of man is much heavier than in Mongolia and Australia.

In the entry for Oriental Plover in Handbook of the Birds of the World, T. Piersma mentions a “scarcity of records between China and the non-breeding grounds,” suggesting that migrating Oriental Plover make a “non-stop flight between these two zones.” Robson, in Birds of Southeast Asia, describes Oriental Plover as a “vagrant/rare passage migrant.”

Piersma says Oriental Plover is “very abundant” on migration in the Yangtze River Valley. That is doubtful. Oriental Plover is certainly not abundant in Shanghai; indeed, in autumn the species is virtually unrecorded here (as well as in much of eastern China). The city may nonetheless serve as a staging area for some portion of the species in spring.

My anecdotal evidence may lend credence to the idea that Oriental Plover fly mind-boggling distances between Australia and Mongolia. During my close encounter with the 30 Oriental Plover at Sanjiagang, the plovers were clearly exhausted. Some fell asleep right in front of me. How many kilometers had they just flown? Hundreds? Thousands?

Oriental Plover is most closely related to, and was once considered conspecific with, Caspian Plover Charadrius asiaticus. Breeding male Oriental Plover is readily distinguishable from Caspian by its purely white head. The thick black breast band on breeding Oriental male is also distinctive.